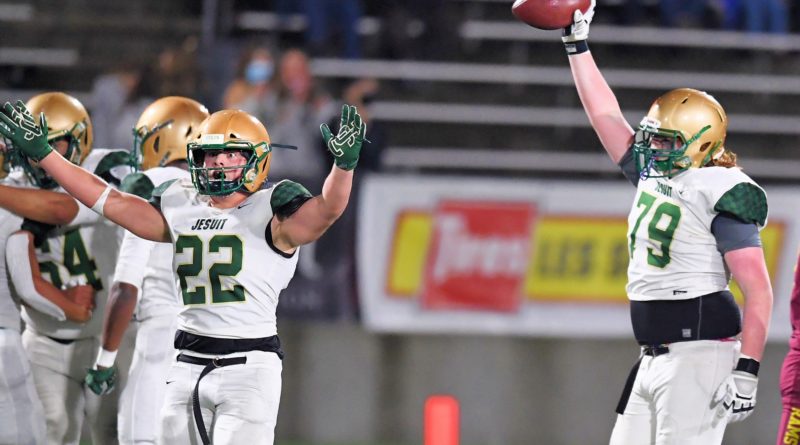 Powerful Central Catholic had opened a 35-14 lead after senior Ellis Bynum scored on a 9-yard run with just 6 minutes and 29 seconds left in the contest.

But the Crusaders weren’t about to put their heads down and call it a season.

Instead, Jesuit came storming back, scoring a couple of quick touchdowns and getting possession with a chance to tie the score in the final minutes before falling to the Rams 35-28 in a Class 6A state playoff semifinal thriller Friday at Hillsboro Stadium.

“Our team, we never give up,” said junior running back Noah Staley, who had a 45-yard touchdown run during the Crusaders’ late comeback bid. “It doesn’t matter how far behind we are — we always work as hard as we can to get back.”

“That’s been our mentality the whole season: Just never give up,” said Jesuit senior tight end/linebacker Spencer McKelligon, who had a touchdown catch. “We came back from a 21-0 deficit (a 44-42 home win over Westview on Sept. 24) in the regular season. Once we came back and won that game, it taught us a lesson — to never give up, and just do what Jesuit does.”

“We were just playing for our seniors,” said Jesuit sophomore quarterback Jacob Hutchinson, who passed for 269 yards and three touchdowns. “I just felt bad that we couldn’t push through at the end for them.”

Central Catholic improved to 14-0. The Rams advance to meet Tualatin in the Class 6A state championship game Dec. 4 at noon at Hillsboro Stadium.

Jesuit, the Metro League champion, finished 11-2 after going 2-3 in the spring season.

“No one expected us to be here, but we just battled through,” Hutchinson said. “There was so much adversity. The only people that believed in us was our team. That was big motivation for us.”

“This season meant a lot to us,” McKelligon said. “It taught me how to be a better teammate, a better person, a better brother. I was just so happy that I was able to compete with this group of guys. The seniors have been hoping to have a normal season ever since COVID started, and I was just really excited to have a good season.”

Jesuit, motivated to keep that season going, got off to a strong start to the semifinal contest. On the third offensive play of the game, senior running back Michael Rincon, after taking a swing pass from Hutchinson, sprinted 73 yards down the right sideline for a touchdown, giving the Crusaders a 7-0 lead with 10:34 to play in the first quarter.

Central Catholic tied the score on a 34-yard pass from sophomore quarterback Cru Newman to junior tight end Riley Williams with 2:50 remaining in the opening period.

The teams remained tied at 7-7 for the rest of a physical first half.

Another Newman-to-Williams touchdown pass gave Central Catholic a 14-7 lead with 9:20 left in the third quarter.

Jesuit would answer right back — in spectacular fashion.

Facing fourth-and-2 at the Central Catholic 38-yard line, the Crusaders called a flea-flicker pass play, with Hutchinson, after taking a toss back from the running back, throwing the ball down field to a sprinting McKelligon, who made a diving catch going in the end zone for a touchdown that tied the score at 14-14 with 7:17 left in the third quarter.

“It was a great play call and the perfect timing,” McKelligon said. “It just really felt good.”

But Central Catholic seemed to take over from there. The Rams scored three consecutive touchdowns, giving them a 35-14 advantage with 6:29 left.

Even then, the Crusaders weren’t discouraged.

“We were just thinking that we have nothing to lose, and to just go out there and live those last moments of football playing the best we can,” McKelligon said.

With that in mind, Jesuit went to work.

Staley, cutting through a big hole on the right side of the line and then sprinting down the sideline, scored from 45 yards, cutting the deficit to 35-21 with 5:17 remaining.

“I saw the hole. (Senior lineman) Nick (Borlet) blocked for me, it was a great block, and I got the touchdown,” Staley said. “That felt really good.”

Things then got even more interesting, as Jesuit sophomore kicker Kadyn Butcher recovered his onside kick. The Crusaders quickly took advantage of that opportunity, with Hutchinson throwing a 49-yard touchdown pass to senior receiver Tyree Blake, trimming the margin to 35-28 with 4:30 remaining.

“It’s definitely not all on me. It’s our offensive line, giving me time,” Hutchinson said. “They had a great pass rush, but our boys held them. Tyree just got open deep, and that helps.”

Jesuit got the ball back on its 12-yard line after getting a defensive stop with 2:22 to go.

But Central Catholic senior Jordan King came up with an interception. From there, the Rams ran out the clock to wrap up their victory.

“We were thinking, ‘We just want it so much,’” Staley said of Jesuit’s late rally. “It’s sad we couldn’t do it, but we’ll get them next year.”

Hutchinson completed 10 of 21 passes for 269 yards and three touchdowns.

McKelligon had four catches for 55 yards and a score. Sophomore receiver Jace Burton had two receptions for 40 yards.

For the Jesuit defense, McKelligon and Staley each had a solo sack. Senior Hayden Smith and junior Patrick Kelley split a sack. Junior Garret Speer had two tackles for loss, and Blake had a game-high 14 total tackles.

“This season was really fun,” Staley said. “I love the seniors, and they worked so hard.”

And, Jesuit says, the team will have plenty of inspiration after this season’s postseason run.

“This is definitely motivation for next year,” Hutchinson said. “We won’t forget this.”

“Yes, this is going to give us motivation for next season — very much,” Staley added. “We’re going to keep working in the weight room. We’re going to build our team chemistry and just keep on working.”