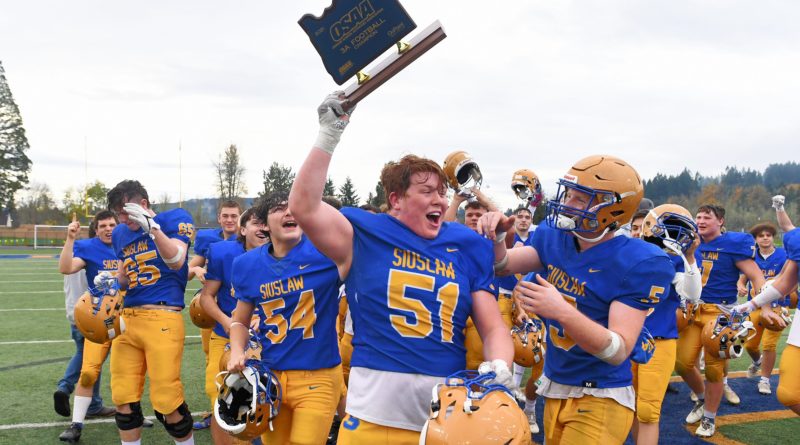 Three years ago, when the Siuslaw football team slogged through an 0-8 season, Braydon Thornton saw the potential he and his teammates had to revive the program.

What they needed, he said, was a leader to bring forth that potential.

Enter coach Sam Johnson, who graduated from the school in 2014, and then came a revival that culminated Saturday afternoon with a Class 3A state championship as Siuslaw beat South Umpqua 14-9 at Herald White Stadium in Cottage Grove.

“I mean, the potential was there. We just needed a push,” Thornton said at midfield, clutching tightly the blue championship trophy at his waist. “He took charge, and he brought everything back to Siuslaw. The turnaround is phenomenal. I couldn’t imagine it going any other way.”

The Vikings capped an undefeated season with the program’s first state championship since 2006.

Siuslaw answered with a 10-play, 74-yard drive that took more than five minutes, with Thornton hauling in passes of 30 and 25 yards from Beau Erickson to set up Camp Lacouture’s 1-yard plunge behind right guard on fourth-and-goal.

“I’m still in shock,” Lacouture said. “Honestly, you get used to losing games every season. But when we started this season, it felt like anything less than this was going to be a disappointment and feel worse than my freshman year. I mean, it had to finish like this.”

The Lancers moved the ball to Siuslaw territory on their ensuing drive, but Thornton drove through receiver Isaac Real to break up a fourth-down pass with 3:50 to play.

“I’m still hurting pretty good,” he said. “But this trophy should make up for it, for sure.”

Thornton, who set a state record this season by catching seven touchdown passes in a win over Pleasant Hill, opened the scoring by stretching out for a 34-yard touchdown with 4:47 left in the first quarter.

The Lancers cut the deficit to 8-6 by halftime, with Moros — who hadn’t kicked a field goal until making the game-winner in last week’s semifinal against Vale — hitting from 34 and 23 yards.

South Umpqua coach Steve Stebbins, who in his ninth season led the Lancers to their first final since they shared the 1981 title with Siuslaw, looked back at those field goals as missed opportunities.

“Juri did a great job putting points on the board for us,” Stebbins said. “But we needed a touchdown here or there to take care of this thing. We just didn’t get it.

“I mean, if you’d told me going into this game that we’d hold that offense to 14 points, I’d have said we’re going to take home the trophy. Our defense was outstanding today. I couldn’t have asked for anything more from them. We just couldn’t convert on our opportunities. Just a play here or there, and we get in the end zone, and it’s a whole different ballgame.”