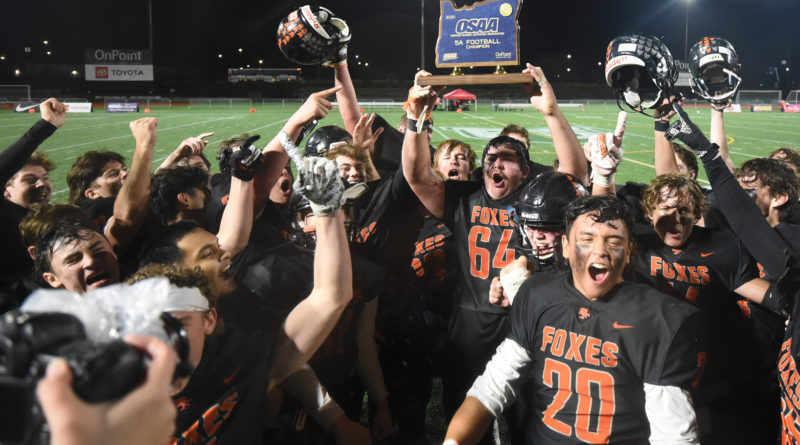 The Silverton football team got off to an absolutely amazingly fast start.

Then, thanks to a huge defensive stand and a clutch incredible game-clinching catch, the Foxes were able to finish what they started.

Silverton, jumping out to an ultra-fast 23-point lead and then fighting off a furious Thurston comeback attempt, claimed its first state title since 1991 by getting a 26-20 win over the Colts in a thrilling Class 5A state championship game Saturday under rainy skies at Hillsboro Stadium.

“We’ve been working so hard for this, since we lost to them in 2019 (44-14 in the semifinals),” said Silverton senior receiver/defensive back Austin Ratliff, who had a touchdown catch. “Everything we’ve dreamed of, we did it. We’ve been saying since we were freshmen that we were going to do this, and we did it.”

“It means a lot. It’s a product of all the work we put in, and it feels good to get our goal out of it,” said Silverton senior quarterback/defensive back Jordan McCarty, who had two touchdown passes on offense and an interception on defense. “This was so fun — the best.”

“Dude, this means everything,” said Silverton senior linebacker James Toland, who had a fumble recovery in addition to being in on one of the key sacks late in the game. “It’s been 30 years, and we’re just proud to be in this position, and we got it done.”

“It means everything,” said Silverton senior receiver Vandon Fessler, who had a touchdown and a spectacular game-clinching catch in the final seconds. “This was what we’ve been working for ever since we were in Pop Warner.”

With the title-game victory, Silverton, with head coach Josh Craig, finished its season 12-1, with the Foxes’ only loss coming on the road against Tualatin, which will play in the Class 6A state championship game next week. The Foxes claimed their second state crown, and their first since they bested Bandon 43-36 in the 1991 Class 3A title tilt.

“It was amazing,” Toland said of the Foxes’ season. “We have a great group of guys. We capitalized and got better every week. This season was so fun. It was my favorite season. We have a bunch of great athletes, great guys, great coaches.”

“It was a great season,” McCarty said. “We played hard every game.”

Thurston, which was looking to win its third consecutive Class 5A state championship, finished its season 10-1.

“We had a great season,” said Thurston senior receiver Micah McGillivray, who had a touchdown catch. “We fought through adversity, getting COVID on the team and having only 20 guys at one time. But we still fought through it.”

“It was a hell of a season,” said Thurston senior quarterback Alex Boring, who had two touchdown passes. “We all played together really well. This is a great group of kids.”

The Foxes got off to a blazing start to the contest. On the first play from scrimmage, Silverton senior Keegan Walter recovered a Thurston fumble. That helped lead to a 1-yard touchdown run by junior Alejandro Briseno, giving the Foxes a 7-0 lead with 8 minutes and 46 seconds left in the first quarter.

On the next Thurston possession, Toland had a big hit, forcing a fumble that was recovered by Silverton senior Nolan Meyer at the Colts’ 12-yard line.

Three plays later, McCarty found Ratliff open in the front left corner of the end zone for a 15-yard touchdown pass, increasing the Foxes’ lead to 14-0 with 7:27 to play in the opening period.

“That was cool,” Ratliff said with a smile. “I was open, he threw it, and I caught it.”

“He’s a great athlete, and he went up and got it,” McCarty said.

On the ensuing Thurston possession, a punt snap went awry, and Silverton’s Carlos Recendiz and Austin Winters combined for a tackle in the end zone for a safety, pushing the score to 16-0 with 6:26 remaining in the first quarter.

After a 30-yard free kick return by Silverton senior Riley Sinn, McCarty found Fessler open over the middle for a 25-yard touchdown pass.

“I’m glad I got one,” Fessler said. “They started bracketing Austin. They put me in the middle of the field, and Jordan put it up to me. That felt really good.”

“We were really prepared and aggressive,” McCarty said of the fast start. “We were ready to go from the get-go, and we capitalized on those turnovers.”

“That was probably the difference in the game,” Fessler said. “We were excited to play. We made some big hits, got the ball out of their hands and capitalized.”

Ironically, it was a turnover that gave Thurston its first score of the game. Colts senior Kellen Humphries intercepted a Silverton pass and returned the ball 48 yards for a touchdown, trimming the deficit to 23-7 with 9:53 remaining in the second quarter.

“Kellen was making plays on (defense) right from the beginning,” Boring said. “Having a kid like that on defense that gives you the chances to make the plays on offense is big.”

Silverton would get a 27-yard field goal by junior Benjiman Roythorne with 27 seconds left in the second quarter, giving the Foxes a 26-7 halftime lead.

But determined Thurston was ready to battle back.

“When we got the pick-6, that got us going,” McGillivray said. “We slowed down a bit again after that, but in the second half, we really got going.”

On the final play of the third quarter, Boring threw a 39-yard touchdown pass over the middle to senior tight end Jacob Newell, cutting the Silverton lead to 26-14 going to the final stanza.

With 8:06 left in the game, Boring found McGillivray open for a 35-yard touchdown pass.

“On the snap of the ball, the safety guarding me was yelling, ‘Run!’” McGillivray said. “He was coming up for the run, and our quarterback, Alex, hit me over the middle. It felt great.”

“The one to Jake was more of a pick route on the safety, see what the safety reads,” Boring said. “On the one to Micah, it was a post over the top.”

The extra point try failed after McGillivray’s touchdown, leaving Silverton with a 26-20 lead.

With Thurston junior linebacker Vaun Halstead, who was causing havoc in the Silverton backfield throughout the contest, helping force the Foxes into a three-and-out, the Colts would get the ball back on their 30-yard line with 5:43 to play and a chance to take the lead.

That’s when the Silverton defense stepped up — in a big, big way.

On Thurston’s first-down play, Walter made a tackle for a 1-yard loss. On second down, Toland and senior Samuel Willis combined to sack Boring for a 5-yard loss.

“I wanted to hit him all day, and I finally got my chance,” Toland said. “I was thrilled. The crowd was loud, and it was fun.”

On third down, Meyer sacked Boring for a 10-yard loss, forcing the Colts to punt.

“That was really exciting,” Fessler said. “I’m glad we were able to do it, because we didn’t want to give them a shot to win the game.”

“Those meant everything,” McCarty said. “We tend to bring a lot of heat, and it felt good in the end knowing our guys would get a lot of pressure on the quarterback.”

But the Foxes still had a bit of work to do.

After getting the ball back on the Thurston 30-yard line with 4:26 remaining, following a 19-yard punt return by Fessler, and with the Colts out of timeouts, Silverton was looking to run out the clock.

The Foxes were on their way to doing that, but with 12 seconds left, they faced a fourth-and-17 from the Thurston 26 yard-line.

On the fourth-down play, McCarty lobbed the ball toward the left side of the field to Fessler, who was covered by two Thurston defenders.

Somehow, Fessler was able to go up, grab the ball and fall to the turf for a 21-yard gain to the 5-yard line.

“We needed the first down,” Fessler said. “We knew that if we didn’t get it, they’d have a shot. … They had me pretty well guarded, so I had to try to do something to get the ball. I tried to track the ball the best I could. I slowed down a little bit and then went for it. It felt amazing. It was pretty exciting.”

“Vandon, he played such a good game tonight,” Ratliff said. “I’m so proud of him. He got it done.”

“I have a lot of confidence in Vandon,” McCarty said. “He’s a great player. I wasn’t surprised, but it felt good.”

After Fessler’s clutch catch, the final seconds ticked away, and Silverton was celebrating a state championship.

“I felt numb. It was a good feeling,” Fessler said. “This means everything for us, and I’m glad we were able to do it for each other. This was really fun. I’ve never thought I’d get here.”

“It was just happiness. I was proud of all the players,” McCarty said.

McCarty completed 15 of 28 pass attempts for 183 yards and two touchdowns. He ran for 16 yards.

Fessler had 10 catches for 145 yards and a touchdown. Walter added three receptions for 13 yards. Senior Reece Groom was Silverton’s leading rusher with 22 yards on four carries.

For the Silverton defense, Walter, Willis and Meyer each had 1.5 tackles for loss. Recendiz led the Foxes with eight total tackles.

“Our defense, I think,” Toland said of the key to victory. “Our offense stepped up big, but our defense stopped them in that last drive in the fourth quarter.”

“It was the hard work, and believing in each other,” Ratliff said. “This team is so close, nothing can break us.”

“Our defense has been the best defense in the state, in my opinion, all year. I’m really proud of those guys. I wouldn’t want to play with anyone else,” McCarty said. “We came ready to play. We knew they would come back after that. Good teams do. But I’m proud of how our team responded.”

Newell had two catches for 71 yards. McGillivray and Halstead each had one catch.

“It was a hell of a game,” Boring said. “We started off with a lot of turnovers. I think without the turnovers, it would have been a different game. But you make mistakes and you move on.”

“It was a good battle,” McGillivray said. “It could have gone in our favor if we fixed a few mistakes that shouldn’t have happened.”