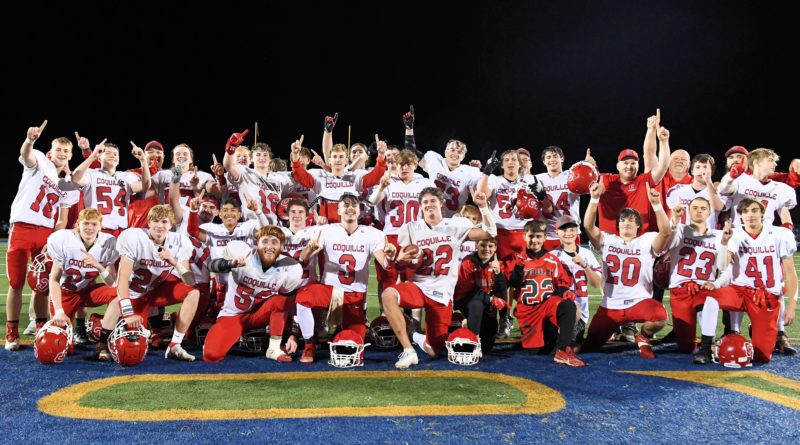 As a history teacher at Coquille High School, David Thomason understood fully the significance of what his Red Devils football team had accomplished Saturday night.

But they paled to what Coquille’s 38-28 victory over Kennedy in the Class 2A final at Cottage Grove’s Herald White Stadium meant to a community starving for success after a season unlike any other.

“The history of this is not lost on me,” said Thomason, in his 13th year running the program. “This is a really big deal, not just for our players and our coaches that have worked so hard, but for our whole community, this is a major deal, and I can’t be more proud of these guys to bring a title home to Coquille. That’s a great, great thing.”

It had been 51 years since the Red Devils (10-1) reached the only other final in state history, when they won the 1970 Class AA title over Junction City.

Two months ago, whether Coquille would have a season hung in the balance. The program went 38 days between games, first after its Week 2 opponent (Creswell) went into COVID quarantine, and then as an outbreak at the school shelved the program for several weeks as the district closed the school for two weeks.

Through it all, the Red Devils persevered, and after their return Oct. 11, they ran the table, ending defending champion Heppner’s 29-game win streak in the semifinals before taking down Kennedy (11-2) — playing in its third consecutive state final — on Saturday.

“It just shows you what kind of a team we’ve got,” Thomason said. “They’ve very deserving of this title.”

The Red Devils trailed 14-0 late in the first quarter after the Trojans cashed in on two fumbles for touchdowns. They slowly worked their way back behind a punishing ground game that rolled up 505 rushing yards — breaking Vale’s 11-man championship-game record of 489 set seven years ago.

Yates was the headliner, setting the 11-man championship game record with the last of his five touchdowns, a 48-yard scamper around the right side enabled by a lead block from wingback Hayden GeDeros.

“It’s something special,” said Yates, who finished with 2,203 yards to become the 39th player in state history to crack 2,200 in a season. “All of my linemen, my blockers, they’re the reason I did what I did today. They put me in this position, and all the credit goes to them.”

Yates, who holds a preferred walk-on offer from Oregon State, also scored on runs of 55, 26, 74 and 61 yards, showing off both sprinter speed and bruising toughness throughout the night.

“We had a good scheme drawn up on defense, but you know, he’s a great back, an explosive guy, and we just let him slip by us a couple times,” said Trojans senior quarterback/defensive back Riley Cantu.

Cantu was one of several Trojans playing in their third state championship game. They won the title in 2018 as freshmen and lost in the 2019 and 2021 finals.

“For this program to get into the final game of the season, it really helps us build for the future and see what it takes to get to the state championship year after year,” he said. “It’s disappointing (to only get one), but you know, you battle adversity throughout life. You learn a lot from the losses, so it’ll help in the long run.”