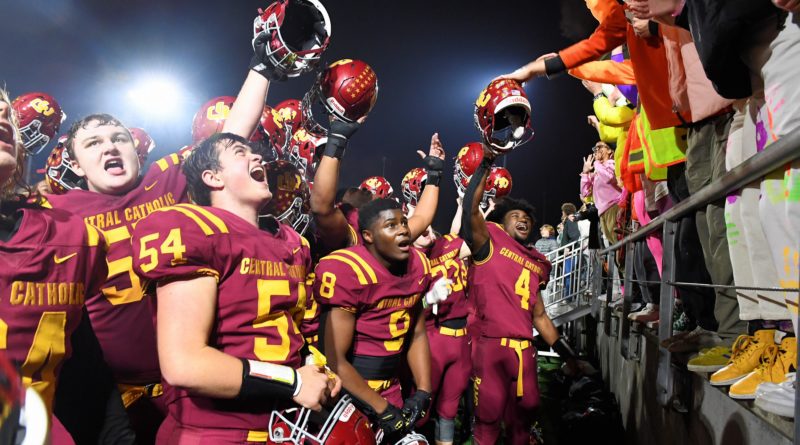 The Central Catholic football team has had to wait two years for the chance to defend the Class 6A state championship it won in 2019.

Next Saturday, the Rams will get their chance to complete back-to-back title runs.

They survived a few nervy moments down the stretch as Jesuit nearly erased a 21-point fourth-quarter deficit, but Central Catholic held off its Holy War rivals 35-28 in Friday night’s second semifinal at Hillsboro Stadium to advance to the final.

The Rams (14-0) will take on Tualatin (12-1) at noon Saturday, Dec. 4, at Hillsboro Stadium, seeking to become the first repeat champion since they doubled up in 2013-14 and the sixth big school to go back-to-back in the past 50 years.

“After our 2019 class graduated, a monster class, I feel like people doubted us. I’m just proud of the way we were able to stick together, mesh over this past year and a half despite COVID. I’m just really proud of our guys.”

The Rams led 35-14 after Ellis Bynum’s 9-yard touchdown run with 6:29 to play, but the Crusaders (11-2) weren’t done. They scored twice in a 90-second span to cut the deficit to seven, then got the ball back after stopping Bynum on fourth-and-2 from the Jesuit 13-yard line with 2:22 left.

“Hey, they’re tough, I’ll give them that,” said junior tight end Riley Williams, who caught two touchdown passes. “They’re strong and physical and fast, and they put up a good fight.

“And I’d say we relaxed a little bit. Our defense kind of got comfortable, and we just sat back. But we stepped back up, and the outcome was a win for us.”

After a first-down incompletion, King stepped in front of a pass across the middle and slid to the turf in front of the Rams bench as teammates engulfed him.

“I was just reading the quarterback’s eyes there,” King said. “They ran a play like that and completed a 40-yard bomb on a previous play, so I was waiting on it, drove on it and made a play.”

King’s second interception came during a critical stretch midway through the third quarter, with the teams locked in a 14-14 duel.

First, senior Stryder Todd-Fields outwrestled the cornerback on a fourth-down streak down the left sideline, falling over the goal line for a 33-yard touchdown that put the Rams up 21-14 with 3:23 left in the quarter.

On the ensuing kickoff, the Jesuit returner’s foot slid as he collected a bouncing ball, and his knee touched down at the Crusaders 3. Three plays later, King jumped a route in the left flat and breezed into the end zone from 14 yards.

“That’s what you expect — your big players to make big plays in big games,” said Rams coach Steve Pyne. “And all those guys didn’t disappoint tonight.”

That doesn’t mean Pyne didn’t experience some agita pacing the sideline as the Crusaders — who erased a 21-point deficit in Week 4 to beat Westview and came back from deficits four times in last week’s quarterfinal win over Lake Oswego — made their final push.

“Extremely nervous moments,” Pyne said. “But we talked about it all week. You’ve got to deal with adversity in big games, and I thought our kids responded.”

His counterpart, longtime Jesuit coach Ken Potter, could only rave about his team’s resilience in the face of the three-touchdown deficit.

“They never quit all year long,” Potter said. “That was the biggest thing. They never quit, and even when it didn’t look very promising, they scored a couple of touchdowns, got an onside kick, and then made a stop. Unfortunately, we couldn’t firepower it down the field, but the kids did a really good job. I’m really proud of them.”

A penalty on the ensuing kickoff meant Jesuit started its next drive at its 8. The Crusaders caught a break when an inadvertent whistle reversed an apparent lost fumble and quickly took advantage.

Sophomore Jacob Hutchinson hit classmate Jace Burton on a 31-yard pass, and fullback Noah Staley shot through a big hole for a 45-yard score to draw them within 35-21 with 5:17 left.

The Crusaders then recovered the onside kick at midfield, and two plays later, senior Tyree Blake got behind two defenders as Hutchinson dropped a ball to him in stride for a 49-yard score.

The Rams looked poised to put the game away after King plucked a second onside kick attempt out of the air following Blake’s score. They got to the Jesuit 13 but eschewed a 30-yard field goal attempt to try to salt the game with a fourth-down conversion. Instead, Johnny Miller and Liam Cassidy combined to stop Bynum a yard short.

“Coach was telling us to just keep our heads up because we’ve come back before and could do it again,” Burton said. “We have all these seniors on our team, and we knew we had to come through for them, try to make this a game. We just couldn’t pull it out.”

Instead, it was the Rams who pulled out the victory, giving them an opportunity to face a Tualatin team that beat Three Rivers League rival West Linn for the second time this season.

The last two teams standing were SBLive Oregon’s preseason Nos. 1 and 2 teams. They’ve met only once in the 30 years since Tualatin opened its doors in 1992 — a 2018 overtime thriller in the second round of the playoffs, with Central Catholic surviving 28-21.

“I’m looking forward to another battle like tonight,” Williams said. “It might be close. I’ll give it to them — they’re a good team. Their secondary, their defense is strong, but I think we can come out with a win.”

Pyne, bidding for his fourth title as the Rams coach, anticipated a long weekend studying film and getting a closer look at a defense that held West Linn in check for much of Friday’s 35-13 victory.

“I feel like maybe we can move the ball on them, but we’ve got our work cut out for us,” he said. “It’s not going to be a cakewalk.”