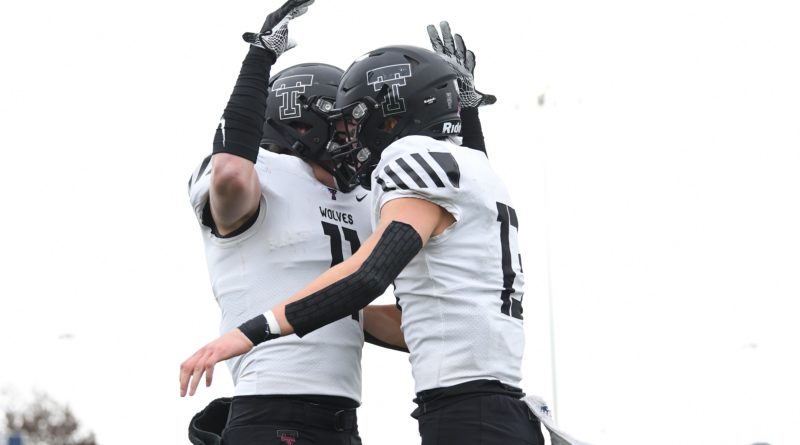 If there had been a question mark about the Tualatin football team coming into the season, it had to do with the strength of the Timberwolves’ defense.

They answered many of those questions eight weeks ago on a sunny Saturday afternoon against West Linn.

Any lingering doubts faded away Friday afternoon against the same Lions team in the Class 6A state semifinals at Hillsboro Stadium. The Timberwolves put on another dominant defensive display in beating their Three Rivers League rivals 35-13 to advance to their first championship game in the past 11 years.

“From the beginning of the season, to be a little shaky on defense, to where we are now just shows our progression, how much better we got on defense,” said senior Malik Ross, who made seven tackles at safety and rushed for a game-high 111 yards and two touchdowns.

“It starts with our preparation, how hard we work in practice. The defensive end comes down to who wants it more. Who wants to scrap more, get on the ground more. Who wants to give the hits out. We take pride in our defense, so we’re not surprised, but you know, we’re not satisfied, either.”

The Timberwolves (12-1) have never won a state title in the program’s 30-year history, having reached the final in 2007 and 2010. They’ll play the winner of Friday’s second semifinal between Jesuit and Central Catholic at noon on Saturday, Dec. 4, at Hillsboro Stadium.

“I’ve grown up with a lot of these guys, playing with them for however long I can remember,” said senior linebacker Kellen Hale, who led the Timberwolves with nine tackles, two hurries and an interception. “Since third grade, I’ve played with the same crew of people, and this is really special. We’ve always talked about this moment and getting to the place we’re at now.”

The Timberwolves had built toward this moment for the past few years. They went out in Round 2 against Central Catholic in overtime in 2018, then lost in the 2019 quarterfinals to Jesuit before seeing their postseason hopes dashed by the pandemic last fall.

“I think I’ve learned a lot about how to manage the playoffs,” said coach Dan Lever, in his fifth season guiding the program. “I think I overanalyzed things in the past, but now, I’m still analyzing things, but I’m now trying not to outflank myself.

“But the kids did it all today. They’ve been doing it all year. When we beat Menlo Atherton down there, with the players that they have, I thought we’re gonna have a shot at this thing if we stay healthy. I’m extremely proud of them, and now, we’ve got to reload for one more game.”

In these teams’ first meeting in Week 5, the Timberwolves kept the West Linn offense out of the end zone in posting a 49-14 victory at Wilsonville High School.

This time, it took the Lions (11-2) until late in the third quarter to find the end zone, but by that point, they’d switched quarterbacks and trailed 28-7.

“We knew that they wanted this game badly, and they wanted to come back and get us,” Hale said. “But we were more prepared. We wanted it more. I think that’s what paid off.”

The tone was set from the start, with Tualatin intercepting West Linn’s first two pass attempts. Jack Wagner’s interception on the first play from scrimmage set up his 6-yard scamper for the opening score of the game.

Hale then stepped in front of a pass into the right flat and returned the ball to the Lions 32, but West Linn’s defense rose up to keep the Timberwolves out of the end zone.

Tualatin’s second score came late in the first quarter after Richie Anderson’s sack forced a short punt. On fourth down from the Lions 33, Ross took the snap out of the Wildcat, swept right and stopped short, lofting a jump pass to Anderson, who’d slipped behind the defense and raced to the end zone.

“We had a great game plan installed, but sometimes, things just don’t go your way,” said junior Mark Hamper, who scored both West Linn touchdowns and had four tackles and an interception. “That’s life, but I’m just proud of how we kept battling through adversity today. We never gave up. That’s what family does.”

Just as the Timberwolves had questions about their defense coming into the season, the Lions had to answer how they’d come back after graduating a standout senior class that led them to a 6-0 mark during the spring season.

Hamper didn’t call this a transition season so much as a learning season for the program, and coach Chris Miller acknowledged that he wasn’t sure what to expect from this young group as they returned to practice in early August.

“I was like, how are we going to win five games? Especially with the schedule we played,” Miller said. “I’m extremely proud of these guys.”

Then, pointing toward the Tualatin players celebrating in the end zone, Miller added, “You’ve got to tip your hat to these guys. They’d probably beat us 8 out of 10 times, maybe 9 out of 10.”

Miller called the issues the Lions had on offense “self-inflicted wounds,” including eight presnap penalties. Starting quarterback Earl Ingle, a junior who took over the job late in the season, played through a shoulder injury that kept the star linebacker from going both ways.

No one made excuses following the defeat, however.

“Our defense fought really well early and kept us in the ballgame,” Miller said. “We just didn’t deliver on offense.”

The Timberwolves put the game away early in the third quarter, taking the kickoff and going 79 yards in 10 plays, including six runs by Ross — the last a 1-yard plunge over the right side on fourth-and-goal.

After a three-and-out by West Linn, Tualatin needed two plays to plunge the dagger, with Wagner bursting through a big hole on the left side to go 53 yards for a 28-0 lead.

“We told ourselves at halftime, we’ve got the lead. We’re not going to lose it,” Ross said. “We were telling ourselves, one more half, and we’re one step closer to history.”

At that point, Miller pulled the trigger and switched Ingle with senior Chase Harmon, who immediately led the Lions to their first score, hitting Hamper on passes of 39 and 5 yards — the latter with 2:31 left in the third for a touchdown.

Any momentum they’d built was immediately squelched when Ross ran 50 yards untouched to push the lead back to 28.

“We talked about having Chase coming out after halftime,” Miller said. “But the consensus was we wanted to give Earl one more series because he does a good job of moving around and buying extra time, which we thought we might need a little bit more. But after that first drive, we went to Chase, and he moved the club pretty well and led us to a couple scores.”

No matter who was at quarterback, though, the Timberwolves felt they were ready. They held the Lions to 167 yards of total offense, sacking Ingle three times.

“We knew we could get back there and put pressure on the quarterback and give him a hard time,” Hale said. “We forced them to make bad decisions the entire game, and it carried through.”

Now, they’ll hope the defensive effort can carry through eight more days against either the defending champion Rams or a Crusaders program that has won six titles.

“We can’t take any team for granted,” Ross said. “Jesuit might be ranked No. 9, but you know they are still a great team, and we know what Central Catholic can do. So, we know what we need to bring to the table, and it’s going to be a great game.”