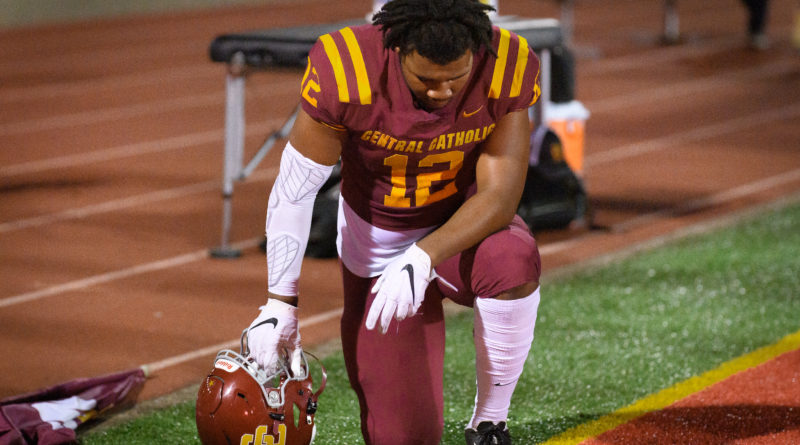 It would be easy for Emar’rion Winston to lose sight of the present and focus on the future.

After all, Winston already won a state championship at Central Catholic in 2019 and has been committed to Oregon for more than a year.

But none of that is as important to the senior linebacker and part-time tight end as competing with his teammates for the remainder of the fall 2021 high school season. The next opportunity will be at 5 p.m. Friday when the fourth-seeded Rams (13-0) face No. 9 Jesuit (11-1) in the Class 6A semifinals at Hillsboro Stadium.

“I won’t take any of this for granted because I’m never going to play with these guys again in my life,” said Winston, the younger brother of former Central Catholic and college standouts La’Mar (Oregon, 2016-19) and Eli’jah (USC, 2018-current) Winston. “I have to focus on the here and now and not the future, because I feel like it wouldn’t be fair to my teammates who are completely focused on what we’re trying to do.”

There’s plenty to like about the here and now for the Rams, who are two wins from their fourth state title since 2013. It all starts with the Winston-led defense.

“I knew all along that we were going to be very good defensively,” head coach Steve Pyne said. “We’re physical, fast, and have veteran guys in the secondary and at linebacker. It was just about seeing how the defensive line would ramp up. It’s been no surprise to me that we’ve been as good as we are.”

Listed at 6-foot-4 and 250 pounds, Emar’rion is the biggest of the three brothers. He’s rated a four-star recruit by 247Sports and the state’s No. 3 overall prospect for the class of 2022.

Pyne said Emar’rion is a mix of his two brothers, with La’Mar’s athleticism and Eli’jah’s build.

“He’s been really consistent all year long for us,” Pyne said. “He prepares every week in practice and doesn’t take days off — or many reps off, for that matter. He asks great questions, he’s a leader, he communicates really well with his teammates and gets along with them.”

With two older brothers who succeeded at Central Catholic before him, Emar’rion became a student of the game at a young age. He craves coaching and is open to constructive criticism.

“I’m getting a phone call (from La’Mar) every night after a game whether I look really good or really bad, and when I do look really bad I’m told that,” Emar’rion said. “Having brothers has really given me the opportunity to soak up a lot of information and ask thousands of questions, because my brothers are football players and leaders as well. They’ve gotten me to never settle.”

Eli’jah didn’t win a state title with the Rams, but La’Mar was a part of back-to-back championships in 2013-14. Central Catholic took a step back the following year, and La’Mar later acknowledged to Pyne that he didn’t have the same laser-like focus as a senior.

It’s a lesson Emar’rion has taken to heart.

“I really think La’Mar has been a good sounding board of advice for him on how to approach things,” Pyne said. “It’s a very unique thing. You can kind of see the trickle-down, if you will, from La’Mar to Eli’jah to Emar’rion in terms of the understanding of the game and what it takes to be successful. I think Emar’rion has been the beneficiary of that.”

Emar’rion agrees with his coach.

“I have talked to La’Mar some about that. I do think we both had different opportunities with different teams, so that may be why I’m so focused on the here and now.”

This week, it’s all about a postseason edition of the Holy War.

Pyne and Winston downplayed the rivalry aspect of Friday’s showdown with Jesuit. The two state powers typically meet during the regular season, but that didn’t happen this fall because of an expanded Mt. Hood Conference schedule.

“I think it’s a bigger deal to the alumni than the kids actually playing in it,” Pyne said. “But we’re excited about it, and it’ll be tough, man. They are talented.”

Jesuit, which took down top-seeded Lake Oswego in the quarterfinals, has run the table since a Week 1 loss to West Linn. Winston expects another strong effort from the Crusaders on Friday.

“Anyone who’s watched Jesuit over the last decade-plus knows how great of a team they are,” he said. “They run the ball through your face, they score a million touchdowns and you can’t do anything about it. Most people tend to mentally fold, so we need to stay mentally focused and say, ‘Hey, they’re going to score, but we’re not going to let them take us out of our game.’

“I respect them with the highest regard. I’m mentally prepping for a fight.”