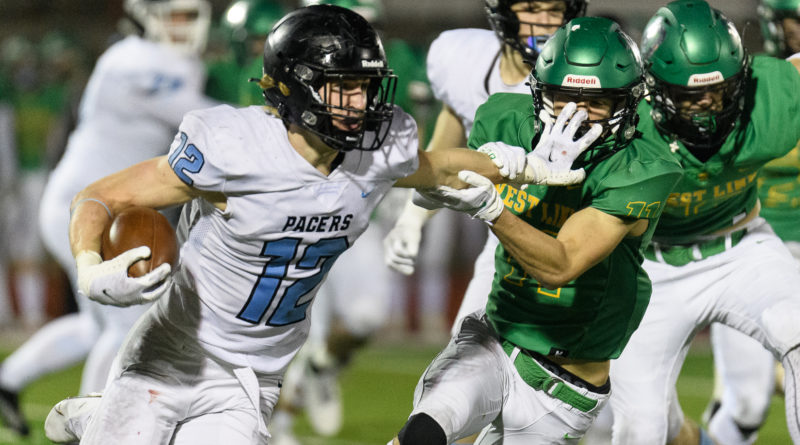 Here’s a look at 20 of the likely top candidates for Class 6A offensive player of the year.

In an offense filled with explosive playmakers, Clemons stood out, earning Metro League offensive player of the year honors and finishing the season with 40 catches for 890 yards and 12 touchdowns. The state’s top-ranked recruit according to 247Sports has 35 offers, including Oregon and Auburn.

The Mountain Valley Conference player of the year threw for 1,446 yards, completing 58 percent of his passes (97 of 167) with 16 touchdowns and just two interceptions.

Diamond led the Falcons to several comeback victories over the course of his career and was named Pacific Conference offensive player of the year as a senior, finishing the regular season with 2,968 yards of total offense and 43 touchdowns (state-high 23 rushing, 20 passing).

Fasel carried the offense for the Crimson Tide all season and won the rushing yardage crown for 6A players, finishing the regular season with 1,781 yards and 22 touchdowns on 254 carries.

Fisher emerged as the Wildcats’ top running back during the spring season, and when senior Aaron Jones was injured to start the season, the junior supplanted him and became one of the state’s top backfield threats. His 1,549 yards (9.5 per carry) and 24 touchdowns broke school single-season records, and he also set school marks for single-game yards (296) and touchdowns (six).

Hall saw his playing time limited by injury the first month of the season, then broke through with a school-record 14 catches for 176 yards in Week 5 against Newberg and kept right on going, eventually leading 6A receivers in yards (935 on 50 catches) and touchdowns (13) during the regular season.

Hamper led the Three Rivers League in catches and yards this season, finishing the regular season with 53 receptions for 688 yards and seven touchdowns.

The PIL’s offensive player of the year led the Roughriders to a share of the league title, throwing for 1,736 yards and 26 touchdowns with nine interceptions while completing nearly 58 percent of his passes (106 of 183). He ran for 401 yards and six scores.

Layne got his feet wet as the starter during the spring season and put that experience to work this fall, being named Three Rivers League co-offensive player of the year and leading the state in passing yards (2,319) while throwing 25 touchdowns with just four interceptions, completing more than 72 percent of his passes (138 of 191).

Leavitt could succeed teammate Darrius Clemons as the state’s top recruit after a junior campaign in which he threw for 2,281 yards and 28 touchdowns in 10 games, completing 58.6 percent of his passes (130 of 222).

Lowe transferred from Lincoln to Lake Oswego late in the summer and quickly developed a connection with quarterback Jack Layne. He became the big-play threat in the Lakers offense, averaging 22.4 yards per catch (27 for 605 yards) and leading the Three Rivers League with 10 touchdown catches. He has offers from Oregon, Oregon State, Arizona and Colorado.

Olvera was one of the top all-around offensive players in the state, finishing among Three Rivers League leaders in rushing (fourth with 717 yards and 14 TDs) and receiving (second with 618 yards on 42 catches).

Prusia has followed his Gatorade state player of the year junior season with a solid senior year, catching a team-high 37 passes for 584 yards and seven touchdowns.

Reichle hadn’t played much in the backfield for the Pacers before his senior season, but he emerged in a big way this fall, with his 1,308 rushing yards and 17 touchdowns the most by any full-time 6A running back.

Sent to the bench in Week 3 of the season, Rincon was called upon because of an injury the following week against Westview and had a big game — 175 yards and four touchdowns in a come-from-behind win. He hasn’t slowed down since, going into this weekend’s Holy War semifinal against Central Catholic with 1,323 yards and 19 touchdowns for the season.

Ross didn’t put up gaudy numbers in being named Three Rivers co-offensive player of the year, but he was a touchdown waiting to happen every time he touched the ball. He finished with 1,071 yards and 13 touchdowns on 128 carries in the regular season, then scored a school-record six touchdowns in a second-round playoff win over Westview.

Thomas continues a tradition of standout dual-threat quarterbacks at Sheldon, throwing for 1,968 yards and 19 touchdowns during the regular season and running for 1,339 yards and 18 scores.

Tight ends rarely win these types of awards, but we rarely get to see a tight end the likes of Williams, who averaged more than 25 yards on his 23 catches (for 582 yards), with 11 for touchdowns.