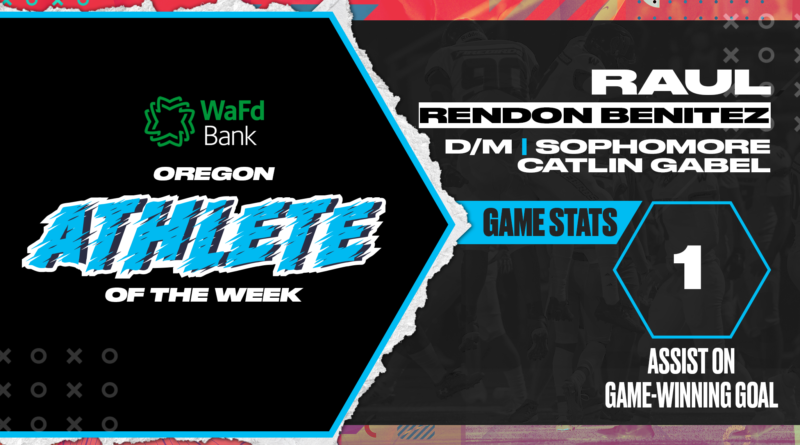 The sophomore’s perfect pass set up Felipe Rueda Duran for the winning goal in the Eagles’ 3-2 semifinal win over Oregon Episcopal. In the championship match, Rendon Benitez and Catlin Gabel defeated Dayton 8-1 to secure the 3A/2A/1A crown.

Rendon Benitez received 45.72% of the vote, beating out Jesuit’s Tyree Blake who finished second with 36.53%. Catlin Gabel’s Alicia Ye finished third with 8.18% and West Linn’s Hudson Staats finished fourth with 5.13%. There were over 70,000 votes tallied this week!

Lindsey Antonson, Wilsonville girls soccer: Antonson capped her remarkable high school career by scoring three goals to lift the Wildcats to the 5A championship with a 4-2 win over La Salle Prep. She finished her career with 139 goals. (STORY, PHOTOS)

Teddy Benbow, Philomath boys soccer: The junior goalkeeper made five saves during regulation, stopped Hidden Valley’s third penalty kick of the shootout and slotted home the winning penalty in the fifth round to lift Philomath to the 4A championship, defeating the Mustangs 5-3 in penalties after the teams finished regulation tied 1-1.

Tyree Blake, Jesuit football: On his 18th birthday, Blake delivered the biggest play of the Crusaders’ 19-7 win over Clackamas, intercepting a pass and returning it 24 yards for a game-sealing touchdown with 1:37 remaining. It was Blake’s third interception return for a touchdown this season. (STORY, PHOTOS)

Alberto Castillo, Marshfield football: Castillo was an unsung star of the Pirates’ 42-7 win over Henley. He was 7 for 7 on point-after kicks and, as the punter, had a 53-yard kick and put another punt inside the Hornets’ 20-yard line.

DJ Daugherty, Marshfield football: Daugherty starred on offense (two touchdown catches, one touchdown run) and defense (interception) as the Pirates rolled to a 42-7 victory against Henley.

Nathaniel Deperro, Summit boys soccer: Deperro had two goals to help the Storm beat West Linn 6-0 for the 6A championship. He finished the season with 32 goals and 19 assists. (STORY, PHOTOS)

Elle Frazier, Grant girls soccer: Frazier had two goals (including the game-winner in overtime) and an assist to help deliver the Generals a 6A title with a dramatic 4-3 victory over Beaverton. (STORY, PHOTOS)

Brandon Gailey, Mazama football: The Vikings rushed for 330 yards in their 21-14 win over Banks and Gailey led the way, racking up 128 yards on 14 carries. He scored the game’s first touchdown on a four-yard run midway through the first quarter.

Seth Glenn, Sherwood football: Glenn ran for a game-high 155 yards and a touchdown and made a game-high 13 tackles, helping the Bowmen score a 35-27 road victory over West Salem. (STORY, PHOTOS)

Litzy Gonzalez, Woodburn girls soccer: In the 4A championship match, Gonzalez made four saves during a scoreless regulation and then helped the Bulldogs outlast Hidden Valley 7-6 in penalty kicks to claim the state title. She had seven saves in a 1-0 semifinal win against Gladstone.

Mizael Harris, La Salle Prep boys soccer: Harris recorded a hat trick — all on penalty kicks — and added an assist in the Falcons’ 5-0 rout of Corvallis in the 5A final. (STORY, PHOTOS)

Tyler Hart-McNally, West Albany football: Hart-McNally had two touchdown runs of more than 50 yards in the Bulldogs’ 28-9 win over Dallas.

Chase Hix, Wilsonville football: Hix fired four touchdown passes to lead the Wildcats to a 42-14 win over Hood River Valley — their 15th consecutive on-field win dating to the start of their 6-0 spring season.

Cory James, Estacada football: James led the Rangers with 132 yards rushing (including a 51-yard touchdown) and 95 yards passing in their 44-22 victory over La Grande.

Gavin Levesque, Thurston football: Levesque kicked two field goals (41 and 33 yards) and provided a lift with his punting (35.2 yards average on six punts) as the Colts got past Canby with a 20-0 victory.

Soren McKee, Summit football/boys soccer: McKee served as the Storm’s kicker (and made a 22-yard field goal) in their 37-19 second-round win over Roseburg and the Storm’s goalkeeper (making two saves) in their 6-0 Class 6A title-clinching win over West Linn. (STORY, PHOTOS)

Easton Miller, Thurston football: Miller led the Colts’ defense with 9½ tackles, including two tackles for loss, in a 20-0 shutout of Canby.

Dom Montiel, Marshfield football: In the Pirates’ 42-7 rout of Henley, Montiel competed 16 of 21 passes for 234 yards and four touchdowns, giving him 44 touchdown passes in 11 contested games this season. Montiel also ran for a score.

Gabe Olvera, Lake Oswego football: Olvera caught three touchdown passes — including scores of 50 and 80 yards — in the Lakers’ 35-14 win against McNary. Olvera’s three touchdown catches ties for the most in an OSAA Class 6A playoff game in the past four seasons.

Jake Reichle, Lakeridge football: In the Pacers’ 40-7 rout of Sheldon, Reichle gained 295 yards and scored five touchdowns on 39 carries — setting season highs in all three categories. His five rushing touchdowns are tied for the second-most in an OSAA Class 6A playoff game over the past four seasons.

Malik Ross, Tualatin football: In an unbelievable performance, Ross scored five touchdowns in the second quarter and a school-record six for the game, powering the Timberwolves to a 58-25 victory over Westview. Ross (19 carries, 172 yards) had five touchdowns rushing and returned a kickoff 88 yards for another. (STORY, PHOTOS)

Felipe Rueda Duran, Catlin Gabel boys soccer: Rueda Duran had three goals and three assists to lead the Eagles to an 8-1 victory over Dayton in the 3A/2A/1A final.

Hudson Staats, West Linn football: Staats recorded two interceptions and returned one of them for a touchdown in the Lions’ 55-9 win over South Salem.

Lucas Tuski, Marist Catholic football: Tuski rushed for 287 yards (217 in the second half) and five touchdowns in the Spartans’ come-from-behind 62-35 win over Cascade. Marist Catholic avenged a 38-33 loss to the Cougars in Week 6.

Elizabeth Valdez Vazquez, Woodburn girls soccer: The Bulldogs beat Hidden Valley for the 4A title, but they wouldn’t have gotten there without Valdez Vazquez, whose goal in the semifinal round lifted Woodburn to a 1-0 win over Gladstone.

Alicia Ye, Catlin Gabel girls soccer: As overtime approached, Ye took matters into her own hands, scoring the game’s only goal in the 79th minute to lift the Eagles to a 1-0 win over rival Oregon Episcopal and the 3A/2A/1A crown.