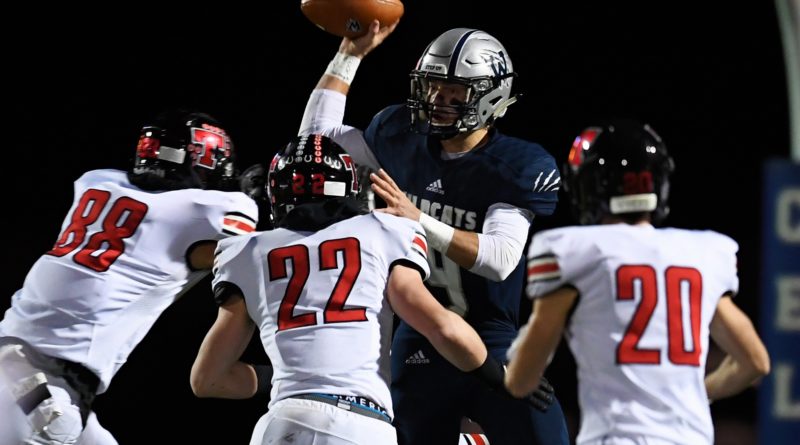 So simple to describe. So lethal in its execution.

That was Thurston’s game plan Friday night for its Class 5A state semifinal matchup with Wilsonville at McNary High School in Keizer.

The Colts blitzed on just about every down, betting that their pass rushers would get to quarterback Chase Hix before the Wildcats senior could deliver the ball to an open receiver.

They didn’t always succeed, but they did often enough to keep Hix and his teammates from sustaining a rhythm. The result was a 34-14 Thurston victory that gives the two-time defending champions a chance to make some history.

Only two teams in the state’s top two classifications have won three consecutive titles — Marshfield in Class A from 1954-56 and Scappoose in Class 3A from 2000-02. The Colts (10-0) will get their shot next Saturday against Silverton (11-1) at a time and site to be determined by the OSAA this weekend.

“Missing our junior year because of COVID, we felt like we could go to state again and again and again,” said senior end Jacob Newell, one of those defenders unleashed to attack the quarterback.

“I just think that we should have four rings, all of us guys. We were ready to go tonight. We were hungry, and we were (angry) that we were underrated in the polls. We were just here to prove ourselves.”

On this night, he caught two passes for 42 yards, but more important, he helped harass Hix all night, with his strip-sack and fumble recovery early in the fourth quarter leading to a field goal.

It was one of six turnovers the Colts forced, and while they turned them into just 13 points, they also meant that the 368 yards the Wildcats piled up through the air wouldn’t lead to points themselves.

“That’s just our defense,” said senior linebacker Brycen Indell. “We fix plays. We never give up. We always keep coming. We’ve got playmakers. We come out and dominate, and that’s the result you’re going to get.”

Still, Wilsonville was within 24-14 late in the third quarter after Jack Johnson caught a tipped ball in the end zone for a 7-yard score, and then the Wildcats forced a three-and-out to quickly get the ball back.

“Game on at that point, 100 percent,” said Wilsonville junior receiver Cooper Hiday. “We’d faced adversity earlier in the playoffs against Lebanon, and this was nothing different. We had a lot of hope.”

Colts senior Gavin Levesque flipped the field with a booming 54-yard punt that pinned the Wildcats inside their 20. Two plays later, Hix was hurried into floating a pass over the middle that Micah McGillivray intercepted at the Wilsonville 31.

Seven plays later, Indell scored his second touchdown of the game, from a yard out. The ensuing Wildcats possession ended with Newell’s strip-sack, leading to Levesque’s 33-yard field goal and a 34-14 lead with 8:08 to play.

“That’s how quickly the tempo can change,” Wilsonville coach Adam Guenther said. “We had momentum, and in two plays, it was back to their side. Our defense played well, but when you get down to the final four, you’ve got to be on your game. Our kids, the way they played was never in doubt, but we just weren’t on tonight.”

Still, considering where the Wildcats were at the start of the season, when three hands out of 40 players in the room shot up when Guenther asked who had varsity playing experience, they could walk off the field with heads held high.

“At the jamboree this year, we didn’t know what we had,” said Hiday, who caught six passes for 177 yards. “We didn’t know how our season was going to look. We’ve come so far from Day 1. We worked our butts off, and we got here and got put in a great opportunity. I’m just so proud of everyone for doing what we did and getting this far.”

The season also got off to an interesting start for Thurston, which entered COVID protocols the week before the season opener and had to sit out the first two weeks of the season.

The Colts returned in Week 3 and right away showed their defense would be a force, posting back-to-back shutouts of Springfield and Willamette.

They survived a midseason stretch against the Midwestern League’s other playoff qualifiers, beating Churchill 42-32 and Crater 9-0 — the start of a dominant run that saw them give up one touchdown over 261 minutes stretching five-plus games before Jay Rummel-West’s 1-yard blast Friday ended the streak with 3:02 before halftime.

“We had hoped for this at the beginning of the season, but with the adversity that we faced early on, it got farther and farther away,” Thurston coach Justin Starck said. “So, it’s really nice to reel it back in, and it’s exceptional to be here now.”

Rummel-West’s score drew the Wildcats within 14-7, and it looked as if they’d survive a disastrous first 9½ minutes — during which they had minus-16 yards of offense — and go to halftime with some momentum.

After forcing a punt and getting the ball back with 1:26 before halftime, the tide turned quickly against them again. Easton Miller recovered a fumbled pitch for Thurston at the Wildcats 25, leading to a 28-yard field goal by Levesque with 7 seconds left.

“We were very opportunistic tonight,” Starck said. “We knew they were going to get their yards, get their completions, and we obviously gave away some chunks, but we did what we needed to do. The takeaways put our offense in a good position, and we cashed in.”

And now, the Colts will take on a Silverton team that dominated West Albany 44-14 in their semifinal at McMinnville High School. Starck thought the Foxes were worthy of the No. 1 seed that went to Wilsonville in the OSAA rankings, and he felt fortunate when the bracket came out that his fifth-seeded Colts were on the opposite side of the draw.

Newell’s initial thoughts about next weekend’s championship game took him back to Autzen Stadium two years ago, when the Colts hammered Silverton 44-14 in the semifinals en route to their second title.