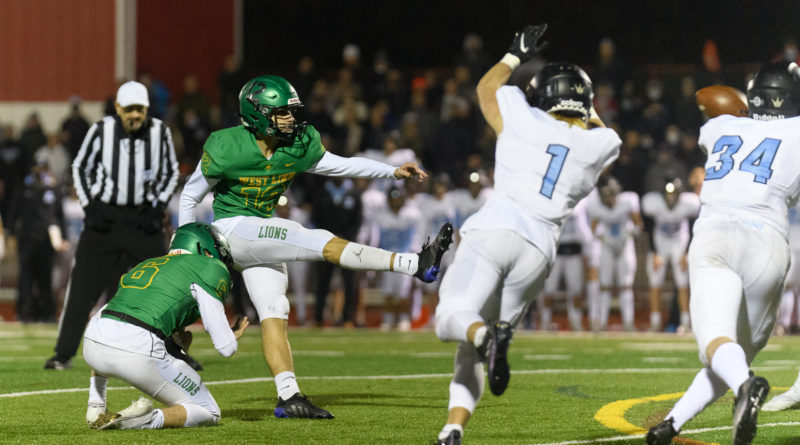 Now that was a battle.

More precisely, it was an intense, physical, all-out defensive battle.

It was a battle in which every single possession was oh-so-important, and points were oh-so-scarce.

When the battle finally ended — with both sides seemingly physically and mentally exhausted — the West Linn football team got to celebrate a hard-fought, emotional victory.

The Lions, with sophomore Gage Hurych kicking a winning 23-yard field goal in overtime, survived and came away with a 10-7 win over Three Rivers League rival Lakeridge in a Class 6A state playoff quarterfinal struggle played Friday at Pioneer Memorial Stadium in Oregon City.

“That is what you call a nail-biter right there,” West Linn junior quarterback Earl Ingle said with a smile. “That was insane. Luckily, it came out our way, which was absolutely amazing.”

“It felt like a movie, honestly,” said West Linn junior Mark Hamper, who ran for 80 yards and scored a touchdown. “It was up and down, up and down the whole way. We finally pulled it out, and it was probably the best feeling in my life.”

“It’s huge, especially against Lakeridge,” Hurych said. “And a game-winning field goal for me, that’s a big one. But that’s not what really won the game. Everything that led up to it, all the big plays, these guys have all worked so hard, and that got me to the point where I could kick that field goal.”

With the win, its seventh straight, West Linn, which shared the Three Rivers League title with Lake Oswego and Tualatin while earning the No. 2 seed in the final OSAA power rankings, improved to 11-1 on the season. The Lions advance to face Tualatin in the Class 6A semifinals, which will be held Nov. 26 at Hillsboro Stadium. The teams met earlier this season in TRL play, with the Timberwolves getting a 49-14 win Oct. 2 at Wilsonville High School.

“This is huge,” Hamper said. “Heading back into a week where we’re seeking to come back against a team that beat us 49-14, I think this is exactly the win we needed.”

“Going to the final four is amazing, especially in my first year on varsity,” Hurych said. “It makes me feel good. I think it’s just awesome that our team worked so hard, and we’ve come a long way over the season.”

“This was amazing. It’s definitely an experience that I’ll never forget,” Ingle said. “I’ll always remember this game, and what we did, and how we did, which was awesome.”

Lakeridge, the No. 4 team out of the Three Rivers League and the No. 10 team in the OSAA power rankings, finished its season 8-4. Three of the Pacers’ losses, including a 28-27 loss to West Linn on Oct. 8, were by three points or fewer.

“We came a long way,” Lakeridge junior quarterback Ryan Oliver said. “We have a lot of seniors this year, so it definitely meant a lot to us. Hopefully, we sent them off right. This season just meant everything to us. We really came together as a family. We just have such a brotherhood here now. We’re not even teammates, we’re brothers.”

“It was a great season,” Pacers sophomore receiver Joey Olsen said. “It was my first real season as a high-schooler, and I didn’t want it to be over. I want to say thank you to all the seniors.”

Defense certainly seemed to rule in Friday’s playoff showdown. In fact, the defensive numbers were just as close as the game itself. The West Linn defense allowed Lakeridge to get 201 offensive yards on 45 plays, while the Lions’ offense got 200 yards on 45 plays against the Pacers defense.

“It was definitely our defense,” Ingle said of the key to victory. “To allow a team like that to only score seven points is absolutely insane. I’m just so proud of them, and excited for what they can do in the future, and what our coaches can do for us.”

“I give all that credit to coach (Anthony) Newman, and all our defense,” Hamper said. “Coach Newman and Coach (Renny) Rector got us prepared, week in and week out. We just follow the script and do what we’re supposed to do.”

“It was amazing,” Olsen said of the Pacers’ defense. “Our defense has been great all year, and they probably played their best game tonight.”

Despite all the stifling defense, it was the West Linn offense that got off to a strong start to the contest. The Lions, in their first possession of the game, turned to their running attack, featuring Hamper running behind the offensive line of senior Noah Sykes, senior Braylon Cornell, senior Eric Mee and senior Ashton Henderson, among others, to quickly move the ball down field.

A 2-yard run by Hamper put the ball on the Lakeridge 11-yard line, where the Lions faced a third-and-4. That’s when West Linn went to the pass. Ingle, rolling to his left, connected with Hamper in the left side of the end zone for an 11-yard touchdown pass, capping a 12-play, 80-yard drive and giving the Lions a 7-0 lead with 5 minutes and 16 seconds to play in the first quarter.

“I think the line set that up pretty well,” Hamper said of the scoring play. “We were gushing it down, just run, run, run, run, run. Then we caught them in man (defense), got a one-on-one matchup, and broke it flat. Earl just delivered a perfect pass. That felt amazing.”

Lakeridge was able to answer in the second quarter. The Pacers, behind the powerful running of senior Jake Reichle, and with Oliver completing passes to junior Jace Swygard and Olsen, moved the ball to the West Linn 10-yard line. On the next play, Reichle, sprinting around left end, reached the end zone, tying the score at 7-7 with 1:46 until halftime.

“Scoring first on a team like that, I know from experience, makes you put your head down a little bit and think a little bit,” Ingle said. “They were definitely thinking. But they came back, battled back, and made it 7-7 at halftime.”

It stayed 7-7 long after that.

Each team did have a scoring opportunity in the second half. Lakeridge, in the first possession of the third quarter, got a 32-yard pass from Oliver to junior receiver Lucas Burkeen on its way to moving the ball to the Lions’ 37-yard line. But on fourth-and-1, West Linn junior defensive back Hudson Staats stopped Reichle for no gain.

The Lions in the fourth quarter had a 28-yard field goal attempt, but Lakeridge senior Nui Tovey blocked the kick — keeping the defenses in charge, and keeping the score tied.

The game went to overtime, with the squads still knotted at 7-7.

The Pacers had the first possession in overtime, and the still-unyielding West Linn defense forced Lakeridge into a 38-yard field goal attempt. The kick was just wide left of the mark, keeping the score 7-7.

The Lions, in their ensuing possession, got a 16-yard run by Hamper and, following a penalty, an 11-yard pass from Ingle to sophomore Willey Donnerberg and a 3-yard run by Ingle on their way to moving ball inside the 1-yard line, where they faced fourth and goal.

The West Linn players then looked to the sideline to coach Chris Miller.

“I was nervous for our next move,” Ingle said. “I had faith in our kicker. Gage is an absolutely amazing kicker, and he proved it tonight. I’m so proud of our holding, our blocking up front, and our kicker.”

West Linn took a delay of game penalty, moving the ball back five yards, giving Hurych a better angle. Following a Lakeridge timeout, Hurych set up for a potential winning field goal from 23 yards on the right side of the field.

“I was trying to keep calm and collected, and keep everyone else calm and collected, my snapper (sophomore Bo Dickson) and holder (senior Chase Harmon),” Hurych said. “It was good. Right off my foot, I knew it was going in. I hit it solid. It felt good. It was amazing. The feeling overwhelmed me, knowing I just won the game. It was amazing, especially against Lakeridge. It’s a huge win.”

“Everything just exploded,” Ingle said. “Everyone was jumping; it was so exciting. Our work for this game absolutely paid off, and it was absolutely amazing.”

Hamper got the ball after the winning kick and made sure it would go to Hurych.

“It’s a special moment, especially for a young guy,” Hamper said. “You want him to cherish that moment.”

Hamper, for the game, gained his 80 yards on 19 carries. He had three catches for 30 yards and a touchdown, and a tackle for loss on defense.

“This was amazing. It was probably the most fun football game I’ve played in,” Hamper said. “When it’s a league battle, it just means more. You’re fighting for the league, fighting to see who’s the best. We’re both familiar with each other. That plays a big role in the game being 10-7.”

Ingle completed 10 of 18 pass attempts for 105 yards and a touchdown. Donnerberg had two catches for 23 yards, and senior Barret Brundage had two receptions for 14 yards.

For the West Linn defense, Mee and senior Nate Watton each had a sack.

“Both teams played their hearts out, honestly. Our defense was amazing, only giving up seven points. I think that was great,” Hurych said. “This was super fun, especially with everyone getting all hyped and excited after the field goal. That was really fun. My family was here — that was awesome.”

For Lakeridge, Oliver completed 6 of 11 passes for 75 yards.

“It was a hell of a game by them. Props to them,” Oliver said. “We just couldn’t execute when we needed to. The defense played lights-out and didn’t allow a score in the second half until the very end. On offense, we just needed to punch it in one more time, and we just couldn’t find the end zone. We were one play away.”

Reichle ran for a game-high 121 yards on 26 carries. Swygard had three catches for 38 yards, and Burkeen had two receptions for 29 yards.

For the Pacers’ defense, sophomore Ethan Blondine, senior Zac Waible and junior Baylor Corbin each had a tackle for loss.

“That was a great game. It was great defense, and great play all around,” Olsen said. “We always come in respecting our opponent, but we wanted to win bad. It just didn’t come out that way.”

“It was a really cool experience,” Oliver said. “It’s not our last time being in a game like this. We’ll be back. I told the guys to remember this feeling, because we never want to feel it again.”

In the Nov. 26 semifinal round, West Linn will face a Tualatin squad that moved to 11-1 with its 42-13 home win over Summit in the quarterfinals. Of course, included in the Timberwolves’ victory list this season is their 49-14 win over West Linn — a memory that is sticking with the Lions.

“Motivated, that would be the right word, for sure,” Hamper said. “When a team beats you 49-14, you don’t forget that. We’ve been thinking about that for a while. When the bracket came out, we saw that we were going to line up with them, and we’re ready for it. We’re going to grind through practice this week, and we’ll be ready on Friday.”

“We’re definitely motivated to come back and show them what we can do,” Ingle said. “That wasn’t our best game, by any means whatsoever. I can’t wait to prepare for them this week.”