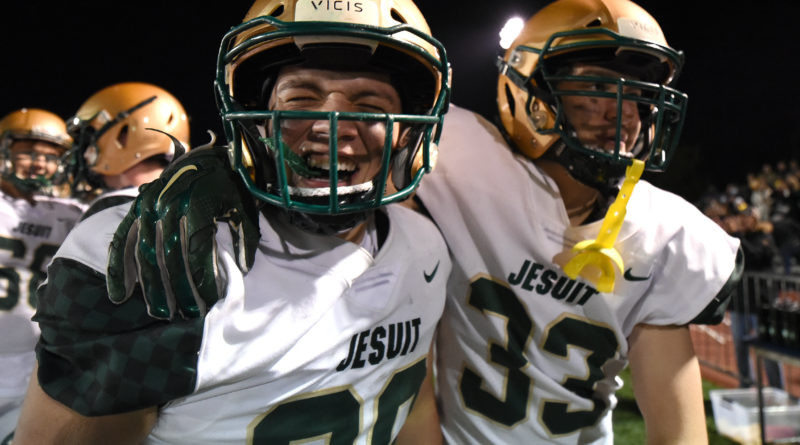 LAKE OSWEGO — There’s no mystery as to why Jesuit has been successful for so many years and so many games throughout coach Ken Potter’s tenure.

An always stellar offensive line dubbed “The Franchise” has produced a smashmouth style of football that lets opponents know it’s coming. But stopping it? Good luck.

No. 9 Jesuit triumphed once again behind an unstoppable run game and held off No. 1 Lake Oswego, 56-49, in a wild back-and-forth contest Friday night in an OSAA Class 6A state quarterfinal at Lake Oswego High School.

Senior running back Michael Rincon had his way, totaling 27 carries for 220 yards and five touchdowns — with all his scores coming after halftime. Lake Oswego had no answer when it mattered as Rincon racked up 184 of his yards in the second half.

The Lakers ended the Crusaders’ run in each of the previous three postseasons.

“It just feels amazing,” Rincon said. “It’s just a good team win, so that’s what makes it even better. (Credit goes) to our O-line. Our Franchise just opened up huge holes.”

Cleeland said he could recognize the line was having its way physically against Lake Oswego’s defense as the game wore on.

“Slowly, but sure, they were getting a little bit more tired, a little bit less push,” said Cleeland, a center listed at 6-foot-3 and 270 pounds. “It seemed like we were in better shape and we kept the pressure on and kept the gas pedal down. I know it came down to the end, but man, that was so much fun.”

The game featured plenty of offensive fireworks, with the teams combining for 15 touchdowns and 1,029 yards. The score was tied five times.

Jesuit did not take the lead until 9:54 left in the fourth quarter when Rincon’s 7-yard run gave the Crusaders a 42-35 advantage. After its defense forced a three-and-out, Jesuit wasted no time extending the lead to 49-35 on Rincon’s 52-yard burst through the Lakers’ defense with 8:54 remaining.

“I feel like offensively, we’d get down the field and they really couldn’t stop us,” Rincon said.

Lake Oswego, which entered as the top seed in the playoffs, still did not go away. Senior quarterback Jack Layne cut the deficit to 49-42 on a 16-yard pass to junior receiver Owen West with 7:36 left.

The Lakers’ defense forced a three-and-out to get the ball back. Lake Oswego appeared on the verge of a tying drive before a fumble that was recovered by Jesuit senior Tyree Blake ended those hopes.

“When you play a good offense like that, they’re going to make plays,” Blake said. “And we just stayed humble. We just did our job as a defense and we just believed in ourselves. All it took was turnovers and stops, and you saw the outcome.”

“Michael had a great game,” Cleeland said. “He has great vision and he’s very shifty, very fast. He’s such a team player and man, he really appreciates (his offensive line) too. Every time he scores a touchdown, he comes over and gives every single lineman a big hug. We appreciate him.”

Lake Oswego had one final shot and scored once more on West’s nine-yard grab from Layne to cut the deficit back to seven with 50 seconds left. The Lakers’ last hope came on recovering the ensuing onside kick, but they could not convert.

“It was a great team effort,” said Potter, who earned his 336th victory. “The kids played really hard. A great high school football game for the crowd to watch. Maybe on the sidelines, not as much fun. But I’m really proud and I get to enjoy this for a little bit and then we’ll get ready for the next one.”

Lake Oswego held the lead four times, and twice in the second half. The Lakers’ last lead came on senior tight end Zach Jarrett’s 25-yard catch for a 35-28 advantage with 3:17 left in the third.

Lake Oswego opened the second half with senior Gabe Olvera’s 33-yard catch-and-run from Layne for a 28-21 lead.

“It’s pretty disappointing, yeah,” Olvera said. “You know, we did all that we could, and we had people that got knocked out and got knocked down. We had to prepare for that. They’re a very good team, but so are we. We just needed to make more plays.”

The Lakers appeared to have all the momentum heading to halftime when senior receiver Justius Lowe made an incredible grab over the defense in the end zone for a 21-14 lead with 16.2 seconds left.

But Jesuit punched back when senior tight end Spencer McKelligon had an improbable catch that saw the ball tipped in the air and land in his hands as he raced 52 yards to tie the score at 21-21 with 1.2 seconds to go in the first half.

“It was a big momentum swinger,” Potter said. “Would it have changed the outcome (without it)? You never know.”

Lake Oswego coach Steve Coury said it’s part of his theory that three to five plays in a game can be the difference between a win or a loss.

“That was a big play, for sure,” Coury said. “Call it luck or whatever you want, but it happens. That kind of stuff happens, and it was a momentum thing, for sure.”

Layne was stellar in his final high school game for the Lakers, completing 28 of 40 passes for 402 yards and six touchdowns. Olvera was his usual threat in the run and pass game with 177 total yards (61 rushing and 116 receiving) and one touchdown.

For Lake Oswego (10-2), its streak of state quarterfinal appearances extended to four. The Lakers also shared the Three Rivers League title with West Linn and Tualatin.

“It was a great year,” Coury said. “You kind of lose sight of the things you accomplish in a night like this, but our kids were great. They played great and Jesuit was darn good.”

Coury said he’s proud of the program’s success despite being a “small public school.”

“Our numbers aren’t where we’d like them to be,” he said. “We’re a small school trying to compete in all this. It’s getting harder and harder. We’ve got a few kids coming back … they were a part of this. They know what it’s like.”

Jesuit (11-1) marches on after snapping a five-game losing streak to Lake Oswego dating to the 2017 quarterfinals. The Crusaders’ previous win over the Lakers was in 2013.

McKelligon led Jesuit with two catches for 111 yards, and sophomore Jace Burton had five catches for 51 yards and a touchdown. Junior Noah Staley added five carries for 61 yards and a score.

Jesuit meets rival Central Catholic next week in the semifinals at Hillsboro Stadium.

“Hopefully we’re going to the ’ship. That’s our goal.”