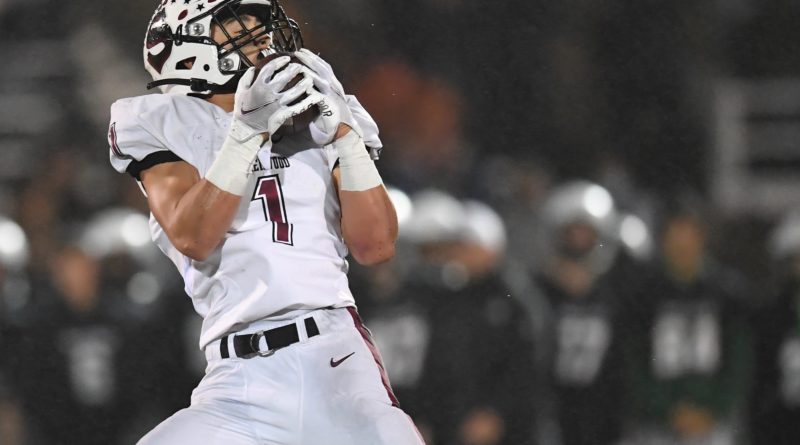 The Oregon high school football playoffs continue Friday. Here’s a look at every Class 6A quarterfinal.

Last meeting: The Lakers won 28-21 in the 2019 state semifinals, extending their win streak in the series to five. Lake Oswego has ended Jesuit’s season in the playoffs each of the past three postseasons.

About the Crusaders: Jesuit has come a long way since opening the season with a 17-3 home loss to West Linn. The Crusaders have reeled off 10 consecutive victories to move coach Ken Potter to No. 2 on the state’s all-time wins list — he’s now at 335 victories, 17 behind Dayton’s Dewey Sullivan for the record. Senior RB Michael Rincon, who fell out of favor early in the season, came back against Westview in Week 4 and has taken over lead back duties, leading the team with 1,111 yards and 14 touchdowns. Sophomore QB Jacob Hutchison has come on the second half of the season, cutting down on the interceptions while throwing for 878 yards and 13 touchdowns in the past six games. The one constant this season — the defense, which allowed 42 points to the Wildcats and 60 in its other eight games, including three shutouts and seven points to Clackamas in last week’s 19-7 quarterfinal victory.

About the Lakers: Lake Oswego, the 2018 champion and 2019 runner-up, has just one blip this season, falling at home 31-14 to West Linn. The loss didn’t cost the Lakers the No. 1 seed — the third time in the past four postseasons they earned the top seed. Coach Steve Coury has moved into 11th on the state’s all-time wins list with 259. They have one of the state’s top QB-RB-WR combos, led by senior Jack Layne, who led 6A during the regular season with 2,319 passing yards and threw for 25 touchdowns, completing more than 72 percent of his passes. Senior RB Gabe Olvera is a weapon in both the running and passing games, and senior WR Justius Lowe (a transfer from Lincoln over the summer) is a big-play threat who averages more than 22 yards per catch with 10 touchdowns. Senior S Dylan Layne (five interceptions) and DL Gavin McGuire (6.5 sacks) lead a defense that has allowed 18.6 points per game.

Last meeting: The Rams won 35-29 in Week 4 of the 2019 season en route to winning the state championship.

About the Bowmen: Talk about a tale of two seasons. Sherwood opened 0-4, starting with two eventual quarterfinalists (Lakeridge and Lake Oswego) before losing to playoff qualifiers North Medford and Mountainside in nonleague play. The Bowmen looked as if they might fall again in their Pacific Conference opener at home against Newberg before scoring in the final half-minute to pull out a 23-17 victory, and they haven’t looked back. They rolled through the remainder of their conference schedule, including a 49-39 victory in Week 9 at Liberty, and have won two road games in the playoffs to become the first big-school team to start a season 0-4 and reach the quarterfinals. Senior RB/LB Seth Glenn is the program’s latest 1,000-yard back and had a team-high 70 tackles during the regular season, and senior WR Cody Hall has had a record-setting campaign, going over 1,000 receiving yards.

About the Rams: The defending champions from 2019 are the last 6A unbeaten after knocking off Clackamas in the de facto Mt. Hood Conference title game in Week 9 and cruising through the first two rounds of the playoffs against Oregon City and Mountainside. They’ve won 26 of their past 27 games, with an overtime loss to Sunset in the final week of the spring season their only blemish. QB Cru Newman hasn’t looked like a sophomore in being named MHC offensive player of the year, throwing for 1,595 yards and a 6A-best 27 touchdowns during the regular season. Senior RB Ellis Bynum’s return from injury has provided a boost to an offense that was already humming, with big-play threats in WR Jordan King and TE Riley Williams leading the way. The defense has posted four shutouts and allowed just 10.7 points per game.

Last meeting: This is the first meeting between the teams.

About the Storm: After three years wandering in the 6A wilderness, Summit has emerged as one of the last teams standing in the postseason, bettering its win total from the previous three seasons combined thanks in large part to 6A’s stingiest defense. The Storm allow 10.6 points per game, including a shutout of South Medford in their playoff opener and a 37-19 victory over Roseburg in Round 2 to avenge a season-opening defeat and move them into the quarterfinals for the first time since 2016 in Class 5A. Senior LB Jack Clemans was voted Mountain Valley defensive player of the year and was one of six Summit defenders named first- or second-team all-MVC. Junior QB Hogan Carmichael has taken significant steps forward since a Week 6 loss to West Salem, completing more than 71 percent of his passes the past five weeks and throwing for a career-best 281 yards in the second-round victory.

About the Timberwolves: Tualatin is in the quarterfinals for the second consecutive postseason, looking to reach the semifinals for the first time since reaching the championship game in 2010. The only mark on its record came in Week 6, when the Timberwolves followed their best performance of the season — a 49-14 thrashing of West Linn — with perhaps its worst in a 35-26 loss to Lake Oswego. After escaping with a 24-21 victory over Lakeridge the next week, the Timberwolves have cruised the past four weeks, winning each game by an average of 34.8 points. Senior RB Malik Ross, a Three Rivers co-offensive player of the year, scored a school-record six touchdowns in last week’s 58-25 victory over Westview, and senior Princeton-bound WR Cole Prusia followed his Gatorade state player of the year junior season with a team-high 37 catches during the regular season. Senior QB Jackson Jones, who missed 2½ games with a shoulder injury, threw for 1,483 yards and 19 touchdowns during the regular season. Senior LB Kellen Hale led the TRL with seven sacks.

Last meeting: The Lions won a thriller 28-27 in Week 6, rallying from a 27-21 deficit as Nick Sakys hit Gus Donnerberg for a 9-yard touchdown pass with 22 seconds remaining.

About the Pacers: Lakeridge lost three of its last four games during the regular season but showed it could hang with the Three Rivers League’s best in last-second losses to West Linn and Tualatin. The Pacers survived a scare against PIL co-champion Grant in the first round and followed with perhaps their most complete game of the season — a 40-7 rout of Southwest champion Sheldon in Eugene. Now, they’re hoping to advance to their first semifinal since 1994. Senior RB/DB Jake Reichle might be one of the state’s top two-way players, adding running back duties this season and rushing for 1,840 yards and 23 touchdowns in 11 games while continuing to play at an all-state level at safety. Junior QB Ryan Oliver has thrown for 1,550 yards and 17 touchdowns, with sophomore WR Joey Olsen (27 catches for 719 yards and seven TDs) his favorite target. Senior LB Zac Waible has amassed 157 tackles (14 for loss), and DL Nui Tovey has 19 tackles for loss and seven sacks.

About the Lions: Anyone who thought West Linn might take a step back this season after graduating a loaded senior class that steamrolled through the abbreviated spring season was in for a rude surprise. The kids were all right, save for one hiccup in Week 5 against Tualatin, and have the Lions in the quarterfinals for the seventh consecutive postseason — all while cycling through three quarterbacks who each has started multiple games. Their depth at the skill positions means no one has put up gaudy numbers except for junior WR Mark Hamper, who has 61 catches for 829 yards and seven touchdowns. Seven receivers have 10 or more catches, and no running back has more than 471 yards. The defense is led by its standout linebacking trio of senior Zeke Viuhkola (65 tackles, 13 for loss, seven sacks) and juniors Ben Winjum (team-high 77 tackles) and Three Rivers co-defensive player of the year Earl Ingle (61 tackles, 11 for loss, five sacks).