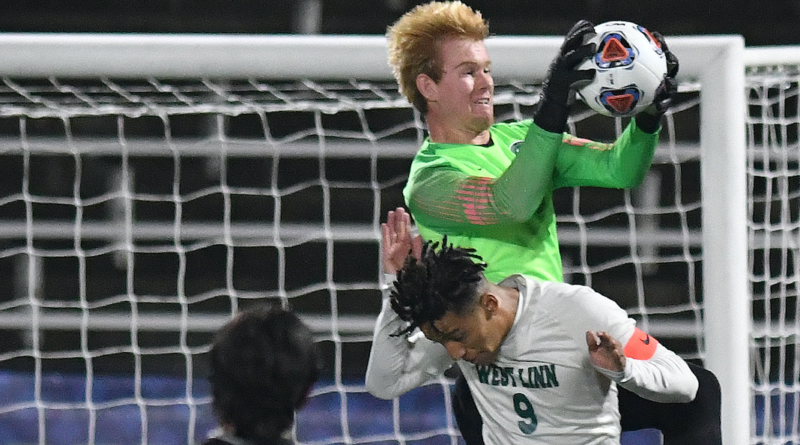 It was a weekend to remember for Summit senior Soren McKee.

Last Friday, McKee booted a short field goal and attempted a 59-yarder in the Class 6A football state playoffs against Roseburg. The lengthy kick fell a few yards short, but McKee and the Storm of Bend happily settled for a 37-19 home victory.

McKee then rested up for a busy Saturday that featured a road trip to Hillsboro and a matchup with West Linn in the 6A boys soccer title game. Summit cruised to a 6-0 victory as McKee kept a clean sheet in goal.

“That was definitely the best weekend of my life,” said McKee, who will be kicking and punting Friday night when the sixth-seeded Storm (9-2) travel to No. 3 Tualatin (10-1) in the football quarterfinals.

“Obviously on Friday, I was just focused on trying to pull out the win that day. And then as soon as that was over, it was about trying to recover, get a good amount of sleep, wake up the next morning and shift my attention onto the state championship.”

The balancing act was nothing new for McKee, a longtime soccer player who first dabbled with football about a month before his freshman season. McKee got the idea from former Summit kicker and forward Max Asevedo, who had graduated that summer.

“I happened to run into (Asevedo), and he told me that he played both soccer and football at the same time. And I thought that was awesome,” said McKee, one of the nation’s top-rated kickers and punters by Chris Sailer Kicking. “I went home, told my dad about it, and he also thought it was awesome.”

McKee showed up at a summer football practice and introduced himself to head coach Corben Hyatt. Hyatt gave him some balls and a tee and asked to see what McKee could do.

Two weeks later, Hyatt offered McKee a starting role on varsity. McKee accepted and has been an impact specialist ever since.

“If every coach had a Soren, it would make life so easy,” Hyatt said. “Having a weapon like him is just phenomenal. It’s going to be hard to replace a four-year starter like him.”

McKee is 8 for 10 on field goals this season with a long of 40 yards. He converted a career-long 50-yarder last season and once drilled a 62-yard kick in practice. Last week’s 59-yard attempt at the end of the first half was on line, but short.

While the 59-yard field goal was more of a Hail Mary, McKee said he loves the pressure that comes with most kicks.

“I kind of feel that with the soccer team, too,” explained McKee, who didn’t allow a goal in any of Summit’s five playoff soccer matches. “Being a goalie, you don’t have to do a whole lot each game. But when you do, it’s important. I really like that aspect of (kicking). I like being in the spotlight and having a little pressure on you.”

To play two sports simultaneously over the past four years, McKee would typically practice with the football team a couple times per week for 15 to 20 minutes. Hyatt worked with soccer coaches Joe LoCascio and Ron Kidder to build special teams practice plans around the soccer schedule.

“Soren has always been a guy that practices a lot on his own, and with kicking you can do that,” Hyatt said. “What we needed him for is our special teams period. Snapping for punts, doing kickoffs, field goal things. … He generally didn’t do Thursday walkthroughs due to soccer games, but when you’ve got a kid as good as he is, you’re not worried about it.”

McKee praised both coaching staffs for making it as easy as possible to play two sports at the same time.

“They have been awesome, letting me do what I wanted to do,” McKee said. “Obviously with football, I don’t need to be at practice constantly. And in soccer, I’m the keeper, so I’m not doing a whole bunch of running and getting tired. It’s definitely been a little difficult, but nothing way too overwhelming.”

Once an aspiring college soccer player, McKee now hopes to kick at the Division I level.

Oregon and Oregon State have shown interest, and Hyatt sent film to a contact in the SEC. McKee has yet to receive a scholarship offer, but the recruitment of specialists often occurs late in the game.

“I want to stay close to home, but I want to play at a high level,” McKee said. “I’m hoping when the season is over, I can get into contact with more schools.”

Added Hyatt: “I think he’s getting a little frustrated because he’s going, ‘Well, shoot. What else can I do?’ And it’s nothing he’s done wrong; recruiting for a kicker just comes later. He’s going to end up somewhere great.”

McKee will have at least one more opportunity to impress college scouts before shifting his attention to recruiting.

Summit, an under-the-radar team in the preseason, placed second in the Mountain Valley and is the conference’s lone quarterfinal representative. The Storm haven’t made it this far since reaching the 5A quarterfinals in 2016.

Tualatin is certainly the favorite Friday night, but Summit won’t be intimidated when it crosses the Cascades for the fifth time this season.

“We know it’s going to be a challenge,” Hyatt said. “But our kids respond, and that’s the crazy thing. We’ve won nine games against nine playoff teams this year, so our kids are playing with a lot of confidence.”