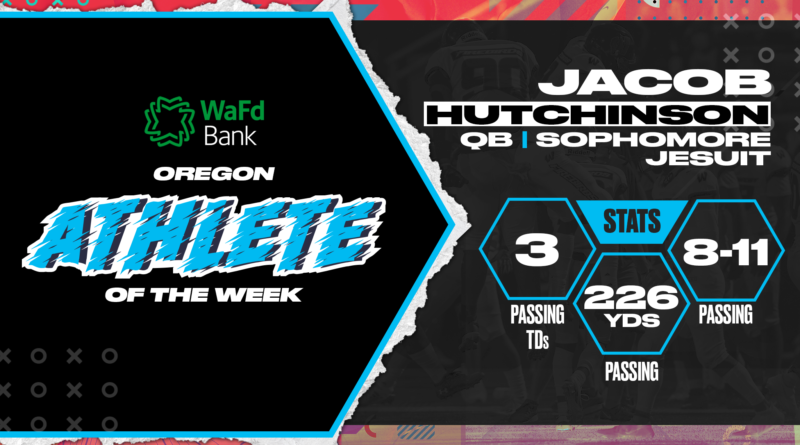 The sophomore connected with Jace Burton on three touchdown passes, helping to power the Crusaders to a 62-6 win over Liberty. Hutchinson, who completed 8 of 11 passes for 226 yards, posted his fifth consecutive game with multiple touchdown passes and has 13 over his past five games. (story, photos)

Hutchinson received 59.75% of the vote, beating out West Albany’s Tyler Hart-McNally who finished second with 33.61%. There were over 46,000 votes tallied this week!

Lucretia Benolken, Cascade volleyball: Benolken posted team highs of 18 kills and 10 digs as the Cougars outlasted Sisters 3-2 for the 4A state title.

Jace Burton, Jesuit football: Burton had three touchdown catches to help the Crusaders roll to a 62-6 victory against Liberty. He finished with seven receptions for 181 yards. (story, photos)

Teague Clemmer, Sandy football: Clemmer was 19 of 27 for 310 yards and four touchdowns and he rushed for 121 yards and another score in the Pioneers’ 51-32 loss to Sherwood.

Paola Covarrubias, Dayton girls soccer: Covarrubias scored the winning goal for the Pirates in their 2-1 first-round win over Brookings-Harbor.

James Crabtree, Sherwood boys cross country: The senior posted a time of 15:04.5 in winning the 6A state championship. (photos)

Jordan Fisher, Westview football: Fisher ran for 294 yards and six touchdowns for the Wildcats in their 57-34 win over Barlow. The junior has 16 rushing touchdowns in his past four games and has two games this season with at least five touchdowns — a feat accomplished twice previously in the past four seasons of Oregon Class 6A football (Mountain View’s Jonas Larson in 2018 and Lake Oswego’s Casey Filkins in 2019).

Carlos Flores, Silverton boys soccer: Flores’ 10th goal of the season gave the Foxes a lead they wouldn’t relinquish in a 3-0 first-round win over Ridgeview.

Tyrone Gorze, Crater boys cross country: Gorze, a junior, won the 5A championship with a time of 15:05.2. (photos)

Hailey Heider, West Albany volleyball: Heider had a team-high 16 kills, nine digs and three blocks as the Bulldogs clinched the 5A championship with a 3-0 victory against Wilsonville. In the 3-1 semifinal win over Ridgeview, she put up 18 kills, four blocks, 11 digs and two aces. (story, photos)

Dominique Huapeo, North Marion girls soccer:Huapeo scored three goals in the first 18 minutes, setting the tone for the Huskies in their 6-0 first-round win over Astoria.

Logan Klopfenstein, Roseburg football: Klopfenstein caught three touchdown passes — all in the first half — to send Roseburg on its way to a 42-17 win over Tigard. The victory was Roseburg’s first in an OSAA playoff since 2013 and its first home playoff win since 2011.

Brody MacMillan, La Grande football: MacMillan rushed for 140 yards and three touchdowns, pacing the Tigers in their 34-12 victory over Gladstone.

Connor Mansfield, Oregon Episcopal boys soccer:The senior captain scored five goals and assisted on another to power the Aardvarks to an 8-0 first-round win over Nyssa.

Dom Montiel, Marshfield football: Montiel completed 18 of 21 passes for 271 yards and three touchdowns and rushed for two more scores in the Pirates’ 43-0 rout of Madras.

Cru Newman, Central Catholic football: Newman accounted for five Rams touchdowns in a 49-0 rout of Oregon City. He completed 9 of 12 passes for 121 yards and two scores, and he reached the end zone on three of his five rushes.

Grady Newsom, Sunset football: Newsom was 34 of 54 for 351 yards with two touchdowns, doing all he could for the Apollos, who ultimately lost 31-18 to Clackamas.

Drew Pedersen, Jesuit boys soccer: Pedersen had a second-half hat trick, powering the Crusaders to a 4-0 quarterfinal win over Lincoln.

Mason Pederson, Marshfield football: Pederson racked up 143 yards on six catches to lead the Pirates’ receivers in their 43-0 win over Madras.

Logan Person, Dallas football: Person scored the Dragons’ touchdown, made an interception and forced a fumble in Dallas’ 7-6 victory at Pendleton.

Oswaldo Rosas, Dayton boys soccer: Rosas, a freshman, scored twice in the first half to help send the Pirates to a 7-1 first-round win over Rogue Valley Adventist.

Vance Sheffield, La Salle Prep boys soccer: The freshman provided the biggest moment of the Falcons’ quarterfinal against Silverton, pouncing on a rebound midway through the second half for the game’s only goal.

Aubrey Smith, Salem Academy volleyball: Smith had 12 kills and 14 digs for the Crusaders in their 3-0 win over Gaston in the 2A championship match.

Daschel Smith, South Salem football: Smith passed to Tini Tinitali III for two touchdowns and ran for three scores of his own, fueling the Saxons’ 40-27 victory over David Douglas. He finished with 276 yards of total offense. (story, photos)

Bowen Stinson, Mountainside football: Stinson had a touchdown catch, logged double-digit tackles and forced a fumble in the fourth quarter to help the Mavericks edge Sprague, 13-7.

Brock Thomas, Sheldon football: Thomas passed for three touchdowns and ran for two, leading the Irish to a 59-24 victory against Roosevelt.

Emily Tubbs, La Grande girls cross country: Tubbs, a sophomore, won the 4A championship with a time of 19:04.6. (photos)

Lance Van Hoose, Cascade football: Van Hoose rushed for more than 200 yards and three touchdowns, leading the way for the Cougars in their 67-24 win over Astoria.

Owen West, Lake Oswego football: West had two touchdown catches and returned an interception for another touchdown in the Lakers’ 49-40 win over Newberg.

Taylor Wilson, Dayton girls soccer: Wilson, a former volleyball player in her first year of soccer, scored two goals to lift the Pirates to a 3-0 quarterfinal victory against Sutherlin.

Emily Wisniewski, Crescent Valley girls cross country: As a freshman, Wisniewski ran to a state victory in the 5A girls race, posting a time of 18:27.9. (photos)

Kaitlyn Wright, Burns volleyball: The Hilanders defeated Sutherlin 3-1 for the 3A championship and Wright led the charge, recording match highs of 17 kills and 12 digs in the state final.