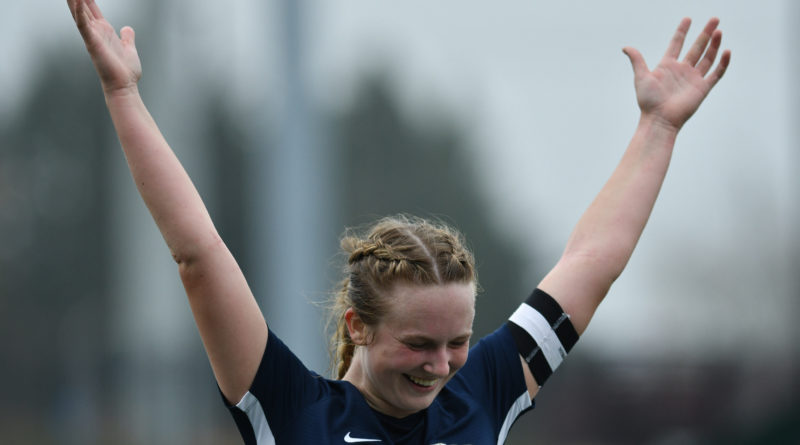 For the second time in a week, Wilsonville striker Lindsey Antonson made history.

The first came last Saturday, when the Oregon State-bound senior became the state’s all-time leading goal scorer. This time, on the same Hillsboro Stadium turf where the Wildcats fell in penalties to Crescent Valley in the Class 5A girls soccer final two years ago, she led her team to the school’s first state championship, beating NWOC rival La Salle Prep 4-2 on Saturday morning.

“It makes it extra sweet to make history twice, especially for the team, for the community,” said Antonson, who recorded a hat trick to finish her career with 139 goals. “We’re not a huge community, and just to get it done for all of us, it feels amazing.”

Antonson also became the third player to reach 50 goals in a season with her second of the game, when she stretched out to toe-poke a cross from Brighton Ring past the onrushing keeper at the top of the box with just enough momentum to beat a defender across the goal line.

Antonson finished with 51 goals, third behind Callan Harrington’s 56 two years ago for Jesuit — it was Harrington’s career mark that she broke in a quarterfinal win over Putnam — and Tiffeny Milbrett’s 55 for Hillsboro in 1990.

“It’s a privilege to coach Lindsey,” said Wildcats co-coach Alex Boehm. “She is as amazing a kid, a personality, a leader as she is technically as a player. We’re privileged to have Lindsey because of the example that she set for our program, doing the right things on and off the field. It’s meant a lot for us to establish our culture.”

It’s a culture that Boehm helped create as a player in the program a decade ago and finally culminated with a championship after three previous runner-up finishes.

The Falcons (15-3-1) would not make Wilsonville’s first title run easy. They received two goals from junior midfielder Emelia Warta in the final four minutes before halftime to forge a 2-2 tie at intermission.

The Wildcats (18-0-1) regained control 4½ minutes into the second half when Antonson was pushed down near the top of the penalty area, drawing a spot kick that she calmly slotted inside the right post.

“I thought it was pretty weak for a final,” he said. “Our goal was to go into the half 0-0, and while I didn’t expect it to be 2-2, a tie’s a tie. So, going into the second half, we were still able to put together what our plan was going to be, and that call changed everything.”

Still, for a team that didn’t receive a vote in the 5A preseason coaches poll, to reach the final was quite an accomplishment.

“We had that little bit more extra motivation,” said Frazier, whose twin daughters Elle and Liv were playing in the 6A final for Grant later in the evening. “But the entire year, we were planning to be playing for a state championship, so this is not a surprise to us at all.”

The Wildcats also weren’t surprised to find themselves in the final after making an unexpected run to the championship game two years ago, losing in a shootout to two-time defending champion Crescent Valley in one of the few games Antonson didn’t score during her career.

She had that match in mind after La Salle Prep equalized just before halftime and resolved that would not happen again.

“We did not want to go to overtime,” Antonson said. “We knew we had another 40 minutes to play. I knew that we were going to come out even stronger, and when we went up two goals, we knew that we weren’t going to let it go again.”

After 100 scoreless minutes, No. 4 seed Woodburn (13-0-4) won its second consecutive OSAA state championship in the eighth round of a penalty-kick shootout on Cassidy Garibaldo’s game-winner at Liberty High School in Hillsboro.

Junior goalkeeper Litzy Gonzalez, who made four saves during regulation, stopped a shot just to her left on Hidden Valley’s turn to set up Garibaldo’s winning kick.

“My coach says I thrive on PKs,” said Gonzalez, who also made two shootout saves in Woodburn’s first-round win over North Valley. “I usually don’t feel pressure on PKs. I think they’re more of a mental game. If I can get in their head, it’s way easier.”

The Bulldogs had never reached a state final before taking home the title as a No. 9 seed two years ago. They went 4-4-2 during the spring season and did not compete in the 4A culminating-week tournament, but coach Andrea Whiteman felt she had a special group this season.

“In 2019, we were viewed as the underdog,” she said. “This year, we were the target in most of our games that people wanted to take down. I’m not surprised about how good we are, but the thing that’s changed is the perception of Woodburn girls soccer. Every team comes to play their best game against us, and that did not used to be the case.

“A lot of pressure comes with that, but the only nervousness I felt today was that things that weren’t in our control would go our way, so we’d get the result we deserved.”

The second-seeded Mustangs, in the state final for the third time in the past four seasons and seeking their first title since 2018, finished 15-1-2.

The Aardvarks (11-3) won the teams’ first meeting in district play, but Catlin Gabel came back a week later to win a nonleague game.

“It is almost always a tight game against our well-known league rivals,” said Catlin Gabel coach Chris Dorough. “Both programs have a lot of pride and history playing the state championship.”

The Eagles appeared poised to grab the lead less than five minutes into the second half when they drew a penalty, but OES goalkeeper Cameron Gabrielson stopped Kendrick Dahlin’s attempt to keep the game scoreless.

With the game approaching overtime, Elise Kim found Ye for the winning goal. Ye, who recently returned from an injury, settled the ball off a throw-in from Kim and fired a low shot with her left foot that beat Gabrielson near post.

“To win again and keep the title at Catlin Gabel means the world to the girls after a tough time during the pandemic,” Dorough said. “This is the closest-knit team I have coached, and the three captains — Kendrick, Lola (Diaz-Gonzalez) and Grace (Mueller) — provided outstanding leadership throughout the whole season. I’m so proud of this group and happy the season ended on such a high note.”