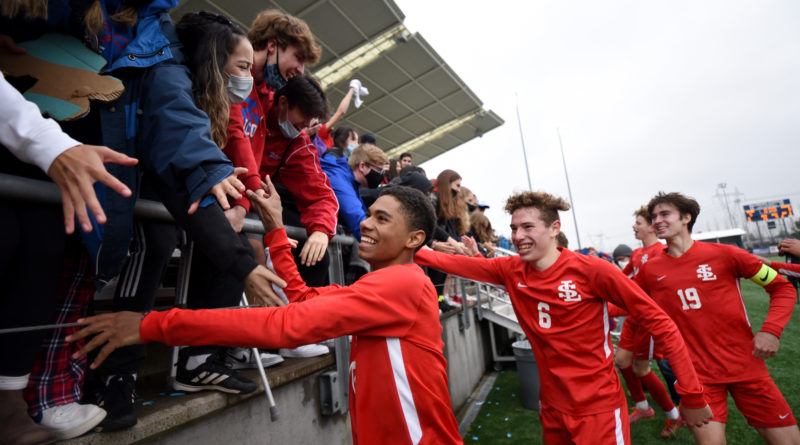 Two years ago, Harris scored two goals to lift the Falcons to their first Class 5A boys soccer state championship in a decade.

On Saturday afternoon, Harris did one better, recording a hat trick and assisting on La Salle Prep’s final goal in a 5-0 victory over Corvallis to secure back-to-back OSAA titles. (PHOTOS)

“Being able to come out and win both times is almost incomparable,” Harris said of the two championships. “Both teams are special. We ground it out together, we fought together. I think both teams were very good, but this is the best way to go out, especially with it being my senior year.”

Harris drew two first-half penalties and converted both of them, then tacked on a third spot goal 70 seconds into the second half as the top-seeded Falcons (16-1-1) put the match away early.

“He’s a magician with the ball,” Falcons coach Monty Hawkins said of his star striker, who finished the season with 24 goals and 21 assists. “The bigger the platform, the bigger the performance for him.”

Hawkins returned to the Milwaukie school this season after leaving the school a quarter-century earlier to focus on his indoor soccer complex in Tualatin. He eventually served as Portland State’s women’s coach for three seasons and spent 14 seasons at Sherwood before coming back to take over a program in turmoil.

“We weren’t able to get much coaching last year,” Harris said. “So, coming into this year, with COVID still being a factor, he was definitely meaningful for all of us.”

Hawkins added, “It is incredible. They accepted me, and we just kept the tradition going. All credit to the boys. They were a special group, and as long as we were committed to one another, stayed humble and kept working, this day was inevitable.”

La Salle Prep matched Hillsboro’s five-goal outburst in the first 5A title game in 2006 for most goals in a 5A final, with its five-goal margin the largest in a 6A or 5A championship game since Jesuit’s 5-0 win over Klamath Union in 2001.

Once the Falcons jumped out to their early lead, their thoughts turned to preserving the shutout — the eighth of the season for a team ranked No. 10 in the region by United Soccer Coaches. In their 2-1 win over Wilsonville in the 2019 final, they allowed the Wildcats’ goal with one second remaining.

“Yeah, a late goal would have ruined everything,” said senior Jeffrey Richter, a backup on the 2019 team who played a starring role in central defense Saturday.

“We wanted that shutout. We came out with high intensity, because we knew they moved the ball well, so we needed to communicate a lot. That was the major thing we worked on throughout the week.”

The Falcons opened the season with a 4-1 victory over the Spartans (12-4-2). Saturday’s victory also avenged an overtime loss to Corvallis in the 2018 state final.

“All the credit in the world to La Salle. They had a great game plan that they executed,” said Spartans coach Chad Foley. “Harris is a very technical player, and he got the better of us on a couple different occasions. We got a couple of bad breaks, and you have to recover quickly from those, and we weren’t able to do that.”

Foley, though, could look ahead to next season, when he returns a core that includes sophomore top scorer Ryan John (15 goals) and sophomore goalie Oscar Hommell.

“This is a great experience for us,” Foley said. “And it’s going to propel us forward moving into next year.”

Junior goalkeeper Teddy Benbow stopped Hidden Valley’s third penalty kick of the shootout and slotted home the winning penalty in the fifth round to lift No. 2 seed Philomath (17-1) to its first state championship in the past nine seasons, defeating No. 9 Hidden Valley 5-3 in penalties after the teams finished regulation tied 1-1 at Liberty High School in Hillsboro.

Benbow acknowledged feeling more nervous taking the winning shot than making the save in Round 3, diving to his left to parry away the kick.

“I didn’t even know I was up to shoot,” Benbow said. “But I’ve just been working on them every day in practice, like the last 15 to 30 minutes every day, because we figured at some point along the road, it would come down to this.”

The Warriors entered the playoffs fresh off their only loss of the season, a 3-2 defeat to Stayton that dropped them into a share of the Oregon West Conference title with the Eagles.

After blasting Estacada 5-0 in the first round, Philomath became the cardiac kids of the playoffs, scoring goals in the 70th minute or later in its next three games to either tie or win games.

In all three cases, it was senior Mark Grimmer Jr. who came up big, and he did it again with 6:52 to play Saturday, hitting on a penalty kick to tie the score at 1-1.

“We had never trailed in a game this season until that Stayton game,” Benbow said. “We ended up going down by two at halftime, but we came back, made it a game. It hurt a little to lose that last game, but it showed us that we could come back.

“Then against McLoughlin (in the quarterfinals), we showed that we could fight through and got a late goal, and same with North Marion (in the semifinals). We knew we had the playmakers to do it.”

The Mustangs (13-5) grabbed the lead four minutes into the second half when Mason Klipfel took Aston Marchington’s pass and one-timed it past Benbow.

“Our season was an amazing story of growth and overcoming expectations,” said Hidden Valley coach Alan Rojas, whose team finished third in the Skyline Conference before catching fire in the playoffs to reach the final for the first time since 2010.

“We peaked right at the end of the season, and it carried us deep in the playoffs. I’m proud of this team for their hard work and chemistry. Tonight’s game was physical and competitive, with lots of momentum swings. We created lots of chances and only managed to put one in the net, and giving Philomath a PK at the end of the game sparked their energy.”

Rueda Duran also had three assists and Widdows had two for the Eagles, who won their 14th state title to draw within one of Jesuit for most in state history.

Evan Williams added a goal and an assist, and center back Joshua Hamlett had the final tally as Catlin Gabel set state records for goals and winning margin in a championship game.

Hamlett and Rueda Duran returned this season after missing time during the spring season, when Catlin Gabel went 6-2-3 against a rugged schedule that included a tie with La Salle Prep and a loss to 2019 Class 6A semifinalist Cleveland, finishing with a district title by beating Riverdale in the final.

Hamlett and Rueda Duran went undefeated in every game they suited up for the Eagles over their four-year careers.

“I’m very proud of the boys,” said Eagles coach Peter Shulman. “They’ve had an incredible run, winning every title that they could in the past four years. The seniors are terrific players, but they’re also exceptional community members, a lot of fun — and this year, utterly invincible.”

The Pirates (14-4), who saw their win streak snapped at 11, avoided the shutout in the 64th minute when Benji Hudson knocked in a rebound of his own shot.

Dayton’s run to its first final included victories against No. 2 seed Riverdale and No. 3 Riverside.

“We knew Dayton had some great players in Hudson and (Danny) Anguiano, and we tried to limit their opportunities,” Shulman said.

He credited Hamlett with “absolutely dominating the aerial space that Dayton wanted to use. We wanted to keep the ball on the floor, and I thought we really began to click about halfway through the first half. With our midfield playing quickly to feet, and the combination of Felipe and Elijah up front, defending this team is like trying to hold back an avalanche.”

The avalanche hit early in the second half, with the Eagles scoring four goals in a 10-minute span to blow open a game they led 3-0 at halftime.