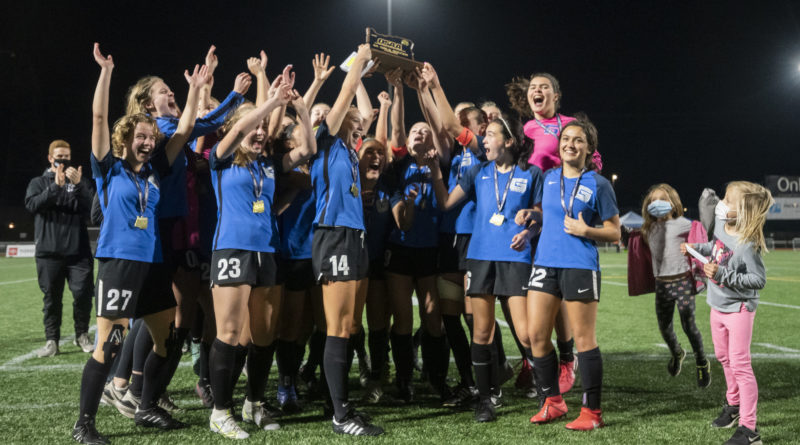 This one had everything.

There were spectacular goals.

There were clutch defensive plays.

There was plenty of intense back-and-forth action. There were momentum swings, and many, many emotional, stressful moments.

And for Grant, there was one other thing, something no Generals girls soccer squad had ever experienced before — a state championship celebration.

“It means everything. It’s something that we talked about at the beginning of the season,” said Grant senior forward Elle Frazier, who scored two goals in the contest, including the match-winner in overtime. “Before the season started, we were like, ‘We’re winning state.’ And we’ve had to overcome a lot of injuries and adversity, but it was never an excuse. We always knew that we’d put it away.”

“This means so much. To be the first Grant team to win the state championship is huge, and I think everyone can really feel that right now,” said Grant junior midfielder Katarina Roesinger, who had a goal and an assist in overtime. “I’m just so happy to be a part of this team and have my name on that list.”

“It’s our first state win, so that really means a lot, especially to our seniors,” said Grant freshman forward Kate Ratanaproeksa, who had a goal in the victory. “It was always in the back of our minds.”

With the history-making win, Grant, the Portland Interscholastic League champion and the No. 3 team in the final OSAA power rankings, finished its season 17-1-1. The Generals reached the state championship match for just the second time.

They insist the plan all season was to not only get there, but to win the state crown.

“At the beginning of the season, we, the captains, were in the coach’s back yard, and we said that it wasn’t going to be an option — we were going to be in the state finals, and we were going to win. We just put our heads down and did it,” Frazier said. “It’s crazy, honestly. We grew up watching the Generals play for years, and to be on this team, and to be the team that does it, it’s insane.”

Beaverton, the No. 3 team out of the Metro League and the No. 5 team in the OSAA power rankings, finished its season 15-3-1. The Beavers earned their first berth in a state championship match since 1991.

“It obviously means a lot. We haven’t been here in a long time, so just being here means a lot,” said Beaverton junior Natalie Drotzmann, who scored the Beavers’ first goal. “There were a lot of highs and lows, but I think we really came together. We just played so hard, and we’re really just a family.”

“It was so awesome, playing with the seniors. I’ve played with them since my freshman year, so ending it by going to the championship was great,” said junior Roxanne Rundle, who scored an overtime goal for the Beavers. “We worked so well as a team, and the chemistry is great, and we all support each other. We’re all there for each other no matter what.”

Grant, determined to get that first state crown, got off to a roaring start to the match.

Frazier, after taking a long pass from senior Minami Powers, dribbled up field and hit a shot from 17 yards, blasting the ball inside the right post of the Beaverton goal, giving the Generals a 1-0 lead with 32 minutes and 21 seconds left in the first half.

“It was really exciting,” Frazier said. “It came really early and, traditionally, if we score early, we tend to hold onto that lead, which I guess didn’t happen tonight, but we came back.”

It didn’t take Grant long to strike again. Ratanaproeksa, after taking a feed from Frazier, struck an open shot from 18 yards, placing the ball inside the right post of the Beaverton goal, making the score 2-0 with 28:13 remaining in the half.

“I was very surprised that it actually went in,” Ratanaproeksa said with a smile. “I didn’t think it was a very good shot. I thought it went right to the keeper. It was really good that I made it. I was so happy.”

Determined Beaverton battled right back. There was a scramble for the ball in front of the Grant goal following a corner kick by Beaverton senior Meg Unruh, with Generals senior goalkeeper Abby Winkler punching the ball away. But Drotzmann, reading the play, took control of the ball and struck it hard from nine yards, putting it in the right side of the Generals’ goal, cutting the lead to 2-1 with 23:31 left in the half.

“It’s something I’ll definitely remember, scoring in the state championship,” Drotzmann said. “It was a ton of fun. I haven’t actually scored on a corner this year. It was a goal for this year, and something I always wanted to do. It felt great.”

The Beavers got the equalizer before the intermission, as senior Lauren Ashe converted a long-range free kick attempt, putting the ball inside the upper right corner of the Grant goal from 35 yards on the left side, tying the score at 2-2 with 6:51 remaining in the half.

The teams would go to the break still tied at 2-2.

“We had a lot of momentum coming in,” Roesinger said. “We were definitely flustered when they came back, but we did a really good job getting reset and taking it back in our control.”

But that didn’t happen right away, mainly because of some clutch play by Beaverton senior goalkeeper Brielle Fernando. Three times in the first 10 minutes of the second half, Fernando made saves on open shots by Frazier, Roesinger and Ratanaproeksa, keeping the score tied at 2-2.

Fernando’s play seemed to set the tone for the second half, as neither team scored in the final 40 minutes of regulation play, sending the state-championship contest to overtime.

That’s where things really got crazy.

Just 1:34 into the first of two 10-minute overtime sessions, Roesinger, from 35 yards on the far-out left side of the field, smacked a line-drive shot into the right side of the Beaverton goal, giving the Generals a 3-2 lead.

“I’ve been working on hitting it from far out,” Roesinger said. “So, I just decided that I was going to hit it as hard as I could. I was ecstatic that it went in. I was so happy. It was honestly like a dream come true that it went in.”

However, that lead wouldn’t last very long — in fact, it wouldn’t even last a minute of game time. Rundle quickly answered, scoring on a spin-around shot from 12 yards, tying the score at 3-3 with 7:31 left in the first overtime session.

“I thought it was the time to score,” Rundle said with a smile. “I got the ball and just slotted it in. It felt so good.”

But this back-and-forth contest would shift back Grant’s way. Frazier, after taking a pass from Roesinger, had an open look at the Beaverton goal from about 20 yards. Fernando, put in an unenviable position, decided to sprint out toward Frazier, and Frazier was able to knock the ball past her and into the net, giving the Generals a 4-3 advantage with 4:39 left in the first overtime.

“I saw the keeper coming out, and I knew I had to get it off my foot before she came out and got it,” Frazier said. “It was a great through ball from KT (Roesinger), then it was one touch past the keeper, and it went in. It felt amazing. It was the best way to end a senior season.”

“I saw (Frazier) making a run, and I knew I had to hit her a good ball, and I know she can put them away,” Roesinger said of the scoring play. “It felt great to be up again and have control over the game again.”

Grant was still leading 4-3 at the end of the first overtime session, but the Generals knew there were 10 nerve-racking minutes to go.

“The last 10 minutes were the longest 10 minutes of my life,” Roesinger said. “But I’m so glad that we were able to shut them out and put it away.”

But even that wasn’t easy, as the Generals needed some key defensive plays down the stretch.

With 2:51 remaining, Grant senior midfielder Caprial Loescher was able to knock the ball away from Beaverton senior Macy Deckert right before Deckert was going to take a shot from 22 yards. Less than a minute later, Grant junior goalkeeper Michaela McCollum made a save on a shot by Beaverton senior Emily Rice from 25 yards.

With 24 seconds remaining, Loescher cleared the ball deep, sailing it past the far end line. It was at that point the Grant students in the stands started counting down the final seconds.

As they hit zero, history was made, and the Generals started celebrating their first state championship.

“I can’t believe we did that,” Frazier said of her emotions at the end of the match. “I just wanted to hug everybody. It was so exciting. It was so crazy.”

“I was terrified at the beginning. At the end, it felt so good to actually win state,” Ratanaproeksa said. “There was a big crowd here, so it wouldn’t have been fun to lose. This was so fun.”

“I couldn’t even believe it,” Roesinger said. “Everyone was together, and the fans came down, and I didn’t even know they were down there. Everyone was just super happy. This was so fun. It was amazing.”

Grant had 11 shots on goal and two corner kicks. Winkler, who played the first half in goal for the Generals, had two saves. McCollum, who played in goal during the second half and overtime, had three saves.

“It was crazy. I think we played good. We showed our true character,” Frazier said. “Our past three games have been won in the last minute, so I think that’s how we ended up getting it in the end. We kept our heads down, and we knew we’d get that last goal.”

“It was an emotional roller coaster, one goal after another,” Ratanaproeksa said. “We just really wanted to win. I think we were the better team. They’re really good, but I think we just wanted it more.”

“I think we played super well,” Rundle said. “We all stepped up, but it’s just unfortunate. It’s great that we got this far. We all worked so hard, and I’m really proud of us.”

“I think we played our hearts out. We fought until the very last second,” Drotzmann said. “It was a ton of fun. I’m going to miss our seniors so much.”

Photos from Grant’s win over Beaverton