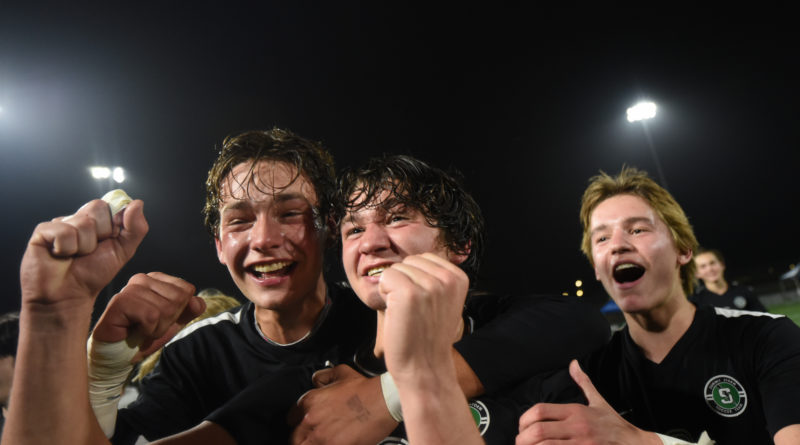 The Summit senior had an opportunity through a connection with Kyle Steinbaugh, an old mentor and lead scout for the Portland Timbers U19 Academy team, to try out for the team over the summer. He was invited to join the program, which would have meant forgoing his final season with the Storm.

“I did consider it,” Deperro said. “But I turned it down this year, my senior year. I wanted to play high school soccer. There’s always next year.”

Deperro wanted one last chance to bring home the Class 6A state title that had eluded Summit each of the past two postseasons, when the Storm entered the final as the higher seed, only to get knocked off by a double-digit seed.

They entered Saturday’s game with West Linn as the top overall seed in the bracket, ranked No. 8 in the country by United Soccer Coaches, with a tie against Mountain Valley rival South Salem the only blemish on their record.

The Lions? They were the No. 6 seed, making their first appearance in a state final after knocking off perennial power Jesuit in the semifinals.

Deperro and the Storm made sure there would be no three-peat of defeat. They stormed out to a two-goal lead after nine minutes and rolled to a 6-0 victory to claim the title that had proven elusive for the past three years. (PHOTOS)

“Three years of hell,” said Deperro, whose brace gave him 32 goals to go with 19 assists this season. “Freshman and sophomore year, we think we’re going to win, and we lose both, and then last year, there isn’t a postseason due to COVID. To come out this year, prove ourselves one more time, make it to the final and get it done, is just truly special.”

“Our back line was incredible,” said senior Alex Grignon, who scored his 25th goal of the season with a curling left-footed shot from the top-left corner of the penalty area in the 54th minute. “I really have to credit our success to them. They have been outstanding. There were some hiccups throughout the regular season, but they fixed them, really came into their own, and they’re the reason we’re state champs.”

As the Storm progressed through the bracket, the pressure seemingly built toward this final, but Grignon said, “I think I was the most calm I’ve ever been for a game. I knew what we had to do, and that if we did what we had to do, there wasn’t a team that could touch us.

“And you can see, state championship win, 6-0, you don’t see that often, especially against a great team like West Linn. I’m so proud of these boys. We deserve this so much.”

The Lions (15-2-2) accomplished plenty this season, including their first outright Three Rivers League title since 2015 and reaching their first final, but that didn’t erase the sting of the moment.

“I mean, we had an amazing season, but you know, all the feelings right now are about tonight. Nothing really eases that,” said striker Luke Tinsley, who returned for his senior season after playing for the Timbers Academy the past two years.

The Storm scored just 3:17 into the contest when Paul Fecteau collected a deflected ball at the top of the penalty arc, dribbled through two defenders and slotted a low shot inside the right post.

“That was unlucky,” Tinsley said. “The ball took a bad deflection and bounced their way, and they got the momentum early.”

Less than six minutes later, Deperro gathered the ball on the left wing, dribbled to the middle of the field and lasered a shot from 25 yards inside the left post.

“It was calming, getting that little cushion that we now know if we screw up, that it’s OK, we still have momentum and we don’t have to chase a goal,” Deperro said. “And then getting that second goal, then the third, the fourth, the fifth, the sixth — it’s just amazing to know that it’s slowly getting harder and harder for them to come back and you’re slowly pulling away. It’s something special, the best feeling in the world.”

The Storm took a 3-0 lead in the 26th minute after Rory McKee served a corner kick near post that Aiden MacLennan flicked home.

After Grignon’s goal, Summit scored two more in rapid succession. Deperro earned a penalty kick that freshman Kaden Roskowski blasted in with his left foot, then the senior closed the scoring by scooping up a turnover in the final third and beating the keeper far post.

While the Storm emptied the bench in the final minutes, Grignon and Deperro — their two stalwarts during this four-year run that saw them go 56-6-5 — remained on the field, savoring every last second.

“I’ve never felt this good in my entire life,” Grignon said. “We wanted this so badly for the past four years. It’s been a lot of sleepless nights, two lost state championship games. All we wanted to do was come back here and win, and we did it. We came back and we won, and I couldn’t be more proud of this team. I’m so happy.”