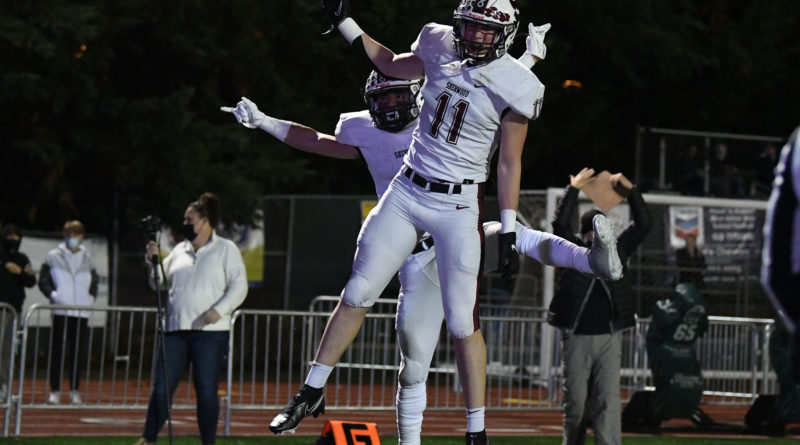 Cody Hall might not have understood the sheer significance of what his Sherwood football team had just accomplished.

He didn’t know the Bowmen had become the first team in state history to have started a season 0-4 and reached the quarterfinals.

“But we’re here,” Hall said after catching three touchdown passes in Sherwood’s 35-27 second-round road victory Friday over West Salem. “We went 0-4, and it was hard. We came back in league, battled the rest of the way, and we’re going to the quarterfinals.”

The 21st-seeded Bowmen (7-4) are in the quarterfinals for the first time since 2015, where they’ll face defending champion and No. 4 Central Catholic (12-0) next Friday.

“We’re looking forward to that challenge,” said senior Seth Glenn, who ran for a game-high 155 yards and a touchdown and made a game-high 13 tackles. “I think we’re ready. A good week of practice, and I feel like we’ll come out strong.”

They can’t come out any stronger than they did against the Mountain Valley champion and fifth-seeded Titans (9-2).

Sherwood jumped out to a 21-0 lead in the first 9 minutes, 40 seconds, then had to stave off a furious comeback attempt from the hosts that wasn’t foiled until junior Alex Armas stopped Titans quarterback Brooks Ferguson on fourth down inside the Bowmen 10-yard line with 1:22 to play.

“Going up 21-0 is probably what saved us,” Hall said. “We told ourselves all week that we were the better team. We came out fighting, and ranked No. 21, they didn’t expect it. But our coaches told us all week, ‘They’re No. 5 in the state, you can’t take them lightly,’ and they came out fighting that second half. They must have had a great halftime speech, because they came back, and it was a dogfight to the end.”

Even when the Bowmen were 0-4, first-year coach Kevin Hastin believed the team had this kind of run in it.

“We just had to focus on getting better every week and not on the wins and losses,” Hastin said. “I’ve said since Week 1 that we’re a dangerous football team because we’re talented, we’re young and we’re hungry, and that’s a good recipe right there.

“We believed we could be a really good football team before the season was over, and we just stuck with it. We stayed the course, and now we’re reaping the benefits.”

Glenn attributed the turnaround in large measure to finally adjusting to Hastin’s system after the program had been led by Greg Lawrence for more than two decades.

“I think it was just with new coaching, we weren’t comfortable with ourselves,” Glenn said. “We finally got comfortable against Newberg. That was a big game for us, and we keep getting better every week.”

For the Titans, who sought their first quarterfinal berth since 2017, they left the field ruing their poor start that included turning the ball over on downs at midfield on their first possession and a strip sack by Oliver Fisher that gave the Bowmen a short field.

Sherwood cashed in on both miscues. Glenn dashed 48 yards for a touchdown on the first play after making the fourth-down stop, and Hall caught a 28-yard touchdown from Bjorn Bergstrom — their second scoring connection of the first quarter — for a 21-0 lead.

“If we hadn’t put ourselves in the deficit that we did, the game would be completely different,” said Titans senior Johnny Withers, who ran for 102 yards and a touchdown. “We really got a feel for things in the second half, but we just couldn’t make up the difference.”

They came close, though. They chipped into a 28-7 halftime deficit on their opening drive of the second half, marching 77 yards in 13 plays before Ferguson sneaked in from the 1 with 5:21 left in the third quarter.

The teams then exchanged quick-strike scores. Bergstrom hit a streaking Hall for a 79-yard touchdown on Sherwood’s first play of the second half, but West Salem answered with an 80-yard pass from Ferguson to Brody McMullen.

After the Titans held on fourth down at midfield, they made it a one-possession game when Ferguson got the cornerback to bite on a fourth-down fake and lofted a pass to Zach Dodson-Greene for a 33-yard score.

The Bowmen chewed more than four minutes off the clock on their next possession, but a false-start penalty took them out of field goal range, and Martin Trujillo hurried Bergstrom into a fourth-down incompletion with 6:17 to play.

After a couple of first downs, Ferguson hit Josh Pikl on a 40-yard bomb to put the Titans in the red zone with 2½ minutes left. Three run plays set up fourth-and-4, and Ferguson appeared to have a lane before Armas led a host of Bowmen who closed it down.

“Our defense has been pretty good in the red zone all year,” Glenn said. “Today, we had some letups, but we got the stop in the end.”

Ferguson, who bounced back from two first-half turnovers to finish with 284 yards of total offense, was gracious in defeat.

“We knew they were a really good team, and they’re rather hot right now,” he said. “We had to come in and play our best tonight, and unfortunately, we didn’t.”

Still, Ferguson — who transferred to West Salem from Central before his junior year — wouldn’t have traded his senior season for anything.

“This is one of the greatest seasons I’ve ever experienced,” he said. “We won a lot of football games, and this team is so tightly wound. We’ve faced so many challenges throughout the year. It was the best football season of my life.”

Meanwhile, the Bowmen live for another week, just happy to have survived those frantic final moments.

“Our kids were backed up to the wall at the end there,” Hastin said. “And they made a huge stand. Our defense came up big in the end, and hey, we’re just pumped to be in the quarterfinals.”