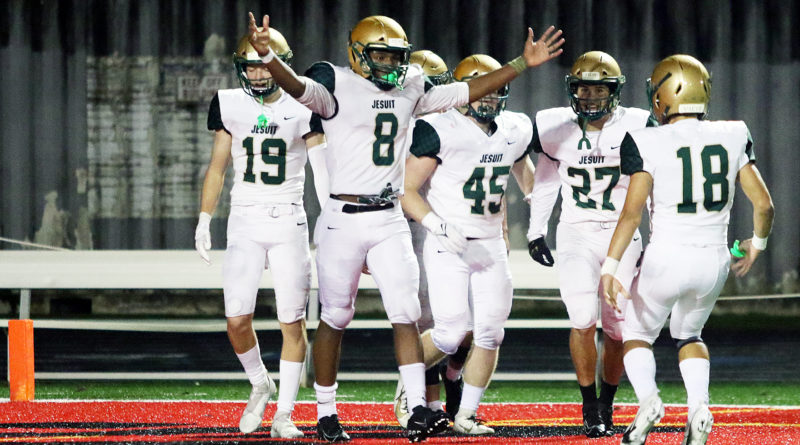 There’s no doubt about it, defense ruled.

And, in the intense postseason defensive battle between Jesuit and Clackamas, it was only fitting that the big play of the contest was provided by the defense.

That big defensive play not only helped clinch the win for the Crusaders, but it was also the icing on the cake — the birthday cake.

Jesuit, with senior linebacker Tyree Blake, on his 18th birthday, returning an interception 24 yards for a touchdown with 1 minute and 37 seconds left, scored a 19-7 win over the Cavaliers in a Class 6A state playoff second-round game Friday at Clackamas High School.

“Yeah, today is my 18th birthday,” Blake said with a smile during the Crusaders’ victory celebration. “I know that it’s my birthday, but it doesn’t matter if it’s my birthday or not. It’s just all about the team, and we pulled through. I’m just happy. We live another week.”

With the victory, its 10th in a row, Jesuit, the Metro League champion and the No. 9 team in the final OSAA power rankings, improved to 10-1. The Crusaders advance to the quarterfinal round of the state playoffs, where they’ll play at Lake Oswego.

“It means a lot — just, boom, one game at a time,” said Jesuit sophomore Lonnie Burt, who had a go-ahead touchdown run in the third quarter in addition to having a big game on defense. “It really means a lot for the seniors, so we just have to keep going for them.”

Clackamas, the No. 2 team out of the Mt. Hood Conference and the No. 8 team in the OSAA power rankings, finished its season 10-2.

“It was a great season,” said senior Ben Moffett, who scored the Cavaliers’ touchdown. “I’m proud of all of our wins. And we learned from our loss against Central (Catholic). It was a team effort all season.”

The Clackamas defense certainly seemed to step up during Friday’s rainy contest, holding Jesuit to 278 yards of total offense and coming up with two takeaways.

But Jesuit’s defense might have been even more stingy. The Crusaders limited the Cavaliers to 161 yards of offense while coming up with two interceptions in the decisive fourth quarter.

The Jesuit offense also got off to a promising start. The Crusaders, on the opening possession of the game, moved the ball all the way to the Clackamas 18-yard line before losing a fumble.

The next time Jesuit got the ball, it wouldn’t be denied.

Crusaders sophomore quarterback Jacob Hutchinson completed 14-yard passes to junior Nick Ferrero and Burt to help set up an 8-yard touchdown run by senior Michael Rincon. The extra-point attempt was off the mark, leaving Jesuit with a 6-0 lead with 1:05 to play in the first quarter.

On second-and-goal, Maehara threw a 6-yard scoring strike to Moffett, who made a spectacular diving catch in the front right corner of the end zone, right in front of the right sideline.

“I just put my hands out, and the ball placed right there,” Moffett said. “I looked at the referee, and he called it a touchdown. It was my first touchdown at the Clackamas field, so it felt really good to do that in our last game.”

With both defenses taking over, in a big way, the score remained 7-6 going to the fourth quarter.

“It was perfect blocks, a perfect call,” Burt said of the scoring play. “I read the fullback, (junior Noah Staley) and (Blake) led me. It was a touchdown because of the perfect blocking. It felt really good, but I knew the game wasn’t over yet.”

No, it wasn’t — and the Jesuit defense wasn’t done making big plays.

On Clackamas’ ensuing possession, Jesuit junior Garret Speer intercepted a Clackamas pass and returned the ball 46 yards to the Cavaliers 10-yard line. But that’s where the Clackamas defense showed its determination.

The Cavaliers stuffed Hutchinson inside the 1-yard line on a fourth-and-goal quarterback sneak from the 2, giving Clackamas the ball and a chance to regain the lead.

But Blake wouldn’t let that happen.

Three plays after the turnover on downs, Blake, reading a pass toward the right side, stepped in front of the ball, grabbed it and sprinted 24 yards down the right side of the field for a touchdown, giving Jesuit a 19-7 lead with 1:37 remaining.

“We worked on this all in practice. My coach put me in a great spot, calling the correct play. Then it was my job to make the play,” Blake said. “All of our defense covered their spots, they made the plays, and that left it to me to make the play. It felt great. I felt relief. But I knew the job wasn’t over and that they could still come back. It just felt great.”

“Right when I saw him catch the ball, I got super excited,” Burt said of Blake’s interception. “He’s a playmaker, and we expect big things out of him.”

After that, Jesuit came up with one more big defensive play. With the Cavaliers having the ball on their 39-yard line, and with time quickly ticking away, Burt sacked Maehara, and time ran out before Clackamas could get off another play.

“They were looking to pass, and our corners and safeties had everything locked up and did their jobs,” Burt said. “That gave me a lot of time to get into the backfield, and our other defensive linemen had a lot of pressure, too.”

The Crusaders then got to celebrate their hard-fought victory.

“We all love the competition. But we know that, with our hard work and mental toughness, that we’d pull it through,” Blake said. “You saw the scoreboard.”

Burt had a big game for the Crusaders on both sides of the ball. On offense, he rushed for a team-high 59 yards on 11 carries, all coming in the second half. On defense, he had two other tackles for loss to go with his game-ending sack.

“Yeah, I had a lot of fun,” Burt said with a smile. “The energy on our team was really high — even the people on the sideline had their energy up.”

Hutchinson completed 11 of 20 passes for 134 yards. Rincon ran for 57 yards on 14 carries. McKelligon was Jesuit’s top receiver with four catches for 78 yards. Sophomore Jace Burton had two receptions for 11 yards.

Also for the Jesuit defense, Speer had two tackles for loss to go with his interception. Senior Johnny Miller had a sack and two other tackles for loss. Staley had a tackle for a loss, as did Blake.

“We made some big plays, Garret Speer with a pick. I’m just really proud of our whole defense,” Blake said. “This was fun; see how we’re all celebrating? But it’s another week, and every week, it gets harder and harder, and we have to focus on ourselves.”

For Clackamas, Maehara completed 10 of 16 pass attempts for 86 yards. Junior Luke Ash ran for a game-high 61 yards on 17 carries and had three receptions. Beltz had two catches for 27 yards, and senior K.J. Johnson-Gibson had two receptions for 24 yards.

For the Clackamas defense, junior Keontae Johnson-Gibson had an interception, junior Sullivan McDaniel had a fumble recovery, senior Kaden Ludwick had a sack, and senior Kage Casey, senior Brody Crowley and senior Logan Chastain each had a tackle for a loss.

“It was a really fun game, and just a battle,” Moffett said. “Our team played so well tonight, and throughout the entire season. Both teams really wanted it. They just played really well.”