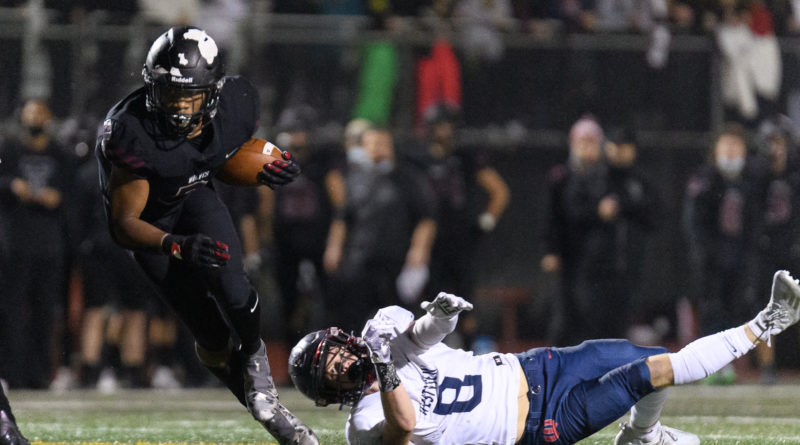 The senior running back put on a performance that will be remembered for a long, long time by those in attendance who got to witness it.

19 rush attempts. 170 yards. And most impressive, a school-record six touchdowns — all coming as part of an explosive first half to lead third-seeded Tualatin past 14th-seeded Westview, 58-25, on Friday night in the second round of the OSAA Class 6A state playoffs at Tualatin High School.

In typical fashion after several big games this season, Ross deflected the spotlight and credited his teammates, especially his offensive line.

“It feels good, but shoot, man — it’s hard to talk about it without crediting my linemen,” Ross said. “It’s just hard. It’s tough. They do such a great job, so … it’s tough to not bring my linemen into it. But individually, it’s a record to break. But I’m more worried about winning than breaking records. I had a great game, but so did my O-line.”

Ross scored five of his six touchdowns on the ground — from 1, 7, 6, 22 and 14 yards. He added an 80-yard kickoff return for a score that was part of a remarkable second quarter during which he scored five touchdowns and left Westview’s defense scrambling to find any answers to stop him.

Ross said the gaps his offensive line created were all the difference.

“Man, it was tough because I had a lot of options, I had a lot of holes,” Ross said. “I had two holes each play and I was like, which hole do I take? Every time I touched the ball, I felt like we were getting five to eight yards, and we just kept with it. Our coaches did a good job of play-calling, and we just felt unstoppable.”

Even Ross’ teammates were left in awe, but not surprised considering his work ethic in practice has carried over to the games.

“He doesn’t even take the foot off the gas in practice,” Tualatin senior Cole Prusia said. “I don’t know how that dude doesn’t have 10-plus (NCAA Division I) offers. He’s electric. He runs this team, he really does.

“That dude puts in so much work on the weekends. He’s also a hell of a basketball player. Like knowing he’s not just good at this, he’s also amazing at that just makes me so much more proud of him.”

Ross said he’s competed in a lot of high-profile competitions, such as AAU basketball tournaments and 7-on-7 football events, but none of it compared with what that first half felt like.

“It means so much being my senior year,” Ross said. “Describing that half … it’s hard to soak in. That’s six touchdowns. That just doesn’t compare to anything else I’ve done — whatever it is, like 30 points in a half (in basketball). It doesn’t compare.”

It was an offensive fireworks show in the first half that was expected coming from two teams averaging a combined 78.7 points per game.

After Ross’ 14-yard touchdown run with 1:05 left in the first half, Tualatin grabbed an unbelievable 51-25 lead entering the break. The teams combined for 11 touchdowns, including seven by Tualatin, on 610 yards of total offense in the first half alone.

Westview, which entered averaging 43.9 points per game, came out punch for punch and stood its ground for a quarter-plus. After junior running back Jordan Fisher scored on a 62-yard screen pass from junior quarterback Sam Leavitt, the Wildcats cut the deficit to 22-19 with 10:40 to go in the second quarter and were very much in the game.

Their other scores came on Fisher’s 1-yard run and senior wide receiver Darrius Clemons’ 74-yard reception in the first quarter.

But Ross’ immediate answer with the 80-yard kickoff return and five touchdowns in the second quarter seemed to break Westview’s spirits heading to halftime.

“He scored six?” said Clemons, who’s ranked the No. 1 prospect in the state by 247Sports and holds offers from Auburn and Oregon. “That just goes to show you Malik is a hell of a football player. I don’t know how he doesn’t have any D-I offers.

“I missed two tackles on Malik. I put that totally on me. None of that is on the other guys. I could’ve played better tonight.”

Tualatin scored its final touchdown in the third quarter when junior Jack Wagner recovered a fumbled punt snap by Westview in the end zone.

The list of contributions the Timberwolves received up and down the roster is long. Tualatin totaled seven interceptions, including three players who got two each.

Prusia had two, including a 36-yard interception return for a touchdown that kicked off the scoring barrage.

Wagner had two, including a highlight one-handed grab while falling backward in the third quarter. Sophomore AJ Noland added two interceptions, and senior Noah Ogoli had the final interception in the fourth quarter.

“We won every phase of the football game,” Tualatin coach Dan Lever said. “We won on special teams, we won on defense, we won on offense. It was a very fierce effort by our team.”

Westview (9-2) finished a phenomenal turnaround, winning more games this season than the previous four seasons combined, when it had an 8-25 record. The Wildcats reached the second round by beating Barlow 57-34 last week.

“It was special to me because all the times I’ve been at Westview, we hadn’t won more than two games (in a season),” said Clemons, who had three catches for 110 yards in his final high school game. “This offseason, we put in so much work and bonded together. We knew we had something special and I’m proud of what we did. Obviously, we came up short of our end goal, but I expected every single one of my teammates to fight until the end and they did. I love these guys.”

“It means a lot,” Ross said. “It’s been 13 years since the last time we’ve played in a quarterfinal at home. We’ve got a couple days to soak this one in, but we’ve got to get to it next week.”

Added Prusia: “We always knew if we put in the work that this time would come, but being in it right now, it’s so cool — like, I’m going to lose sleep tonight knowing we’re playing again.”