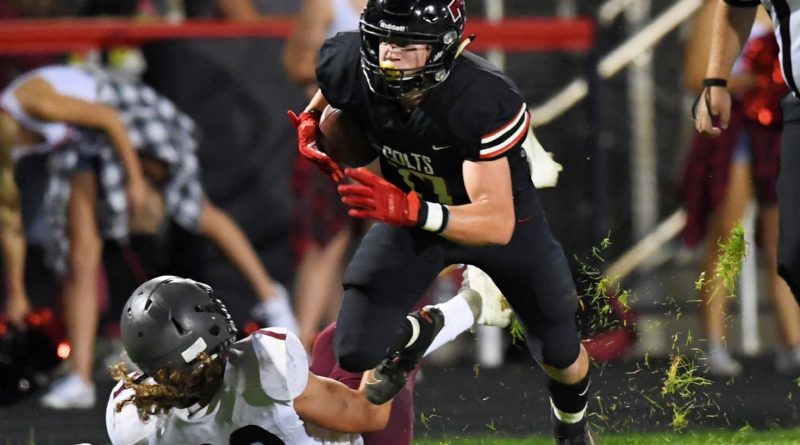 The Oregon high school football playoffs continue Friday and Saturday. Here’s a look at every Round 2 matchup in Class 6A, 5A, 4A, 3A, 2A and 1A.

All games 7 p.m. Friday unless noted

Quick stat: The Celtics and Lakers have met twice — both times in the playoffs. McNary won in the 2001 semifinals en route to the second of its two titles. Lake Oswego won in 2012 en route to the final.

First impression: The Lakers survived a late scare from Newberg to advance to the second round for the fifth postseason in a row. Was that just the wakeup call they needed for the rest of what they hope is a championship run?

First impression: Cavaliers coach James Holan played it close to the vest whether junior quarterback Blake Baker would play this week after leaving their first-round win over Sunset early with an injury. They’ll want all hands on deck facing a Jesuit defense that has allowed three touchdowns and shut out three opponents over the past five games.

Quick stat: Both the Bowmen and Titans have reached the second round of the playoffs every year since Sherwood moved up to Class 6A in 2014.

First impression: Sherwood has gotten on a roll since starting the season 0-4, winning the Pacific Conference title and traveling to Sandy for a first-round win. Can the Bowmen crack a West Salem defense that has posted back-to-back shutouts as part of a six-game win streak?

Quick stat: The Rams’ 49-0 victory over Oregon City in Round 1 was their first playoff shutout since beating Tigard 49-0 in the 2014 state final.

First impression: The Mavericks are rounding into form after an 0-3 start, with a COVID forfeit to Jesuit in Week 8 their only other blemish, but they’ll need a monumental effort to slow Central Catholic, which has scored 40 or more points eight times this season.

Quick stat: Junior Jordan Fisher ran for a school-record 296 yards and six touchdowns in the Wildcats’ 57-34 first-round victory over Barlow.

First impression: The must-see game of Round 2 features two of the highest-powered offenses in the state. While the consensus among the SBLive Oregon staff is a Timberwolves victory, this game could go either way and should keep the scoreboard operator quite busy.

First impression: Two of the biggest surprises in Class 6A square off in central Oregon. Roseburg hasn’t been to the quarterfinals in a decade. The Storm have ridden their defense to their best season since moving up to 6A. The teams opened the season in Cottage Grove, with Roseburg winning 23-7.

Quick stat: The Pacers and Irish split their previous two playoff meetings, with Lakeridge winning in the second round in 1982 and Sheldon taking a first-round game in 2010.

Quick stat: The Lions are in Round 2 for the seventh consecutive season after easing past Bend 35-13 in their playoff opener.

First impression: The Saxons will need another monster game from junior quarterback Daschel Smith and to clean up the mistakes that plagued them throughout a first-round win at David Douglas if they are to hang with West Linn.

Quick stat: The teams are in opposite divisions of the Northwest Oregon Conference but have never met on the football field.

First impression: The Wildcats have fired on all cylinders all season, with their closest margin of victory an 11-point win over Scappoose in Week 4. The Eagles will need to find another gear to stay with Wilsonville — something they’re capable of doing with senior quarterback Trenton Hughes at the controls.

Quick stat: The Colts have allowed one offensive score in their past four games — a fourth-quarter touchdown by Ashland against their second-string defense in a Week 8 victory.

First impression: The Cougars will need another big game from sophomore Tyler Konold, who has rushed for more than 1,500 yards, and senior quarterback Mikey Gibson to stop Thurston’s march to a third consecutive 5A state title.

Quick stat: The Dragons’ 7-6 first-round victory over Pendleton made them the first 5A team in the past four years to win a playoff game while scoring fewer than 10 points. Mountain View beat Milwaukie 3-0 in the 2017 first round.

First impression: This game has all the makings of another defensive struggle. The Bulldogs handled Dallas in both teams’ Mid-Willamette opener in Week 3, handing the Dragons a 21-9 defeat, and West Albany blanked a Scappoose team last week that came in averaging 40 points per game.

Quick stat: The Vikings’ four-game win streak is their longest since they started the 1992 season 6-0.

First impression: North Salem last week earned its first playoff victory in the past 17 seasons. For the Vikings to advance to the semifinals for the first time since sharing the 1963 Class A title with Grant, they’ll need to knock off a Foxes team that has allowed only two teams to score more than eight points all season.

First impression: The Hornets rely upon a defense that has allowed just 12 points per game, but they haven’t seen an offense as explosive as Marshfield’s. The Pirates have scored 40 or more points eight times and reached 50 four times.

Quick stat: The teams have split four all-time meetings, with the Vikings winning their most recent matchup 38-0 during the spring season en route to the 4A Showcase title.

First impression: Banks’ defense has rounded into form since giving up 403 yards and 33 points in its only loss of the season, to Estacada in Week 2. The Braves haven’t faced a running game quite like Mazama’s since then, however. How they handle the Vikings’ veer will tell the tale of this game.

Quick stat: This quarterfinal is a rematch from Week 4, when the Rangers traveled up I-84 and beat the defending state champions 44-14.

First impression: That Week 4 game marked the return of Tigers running back Brody MacMillan from a torn ACL suffered during the spring season. He rushed for 13 touchdowns over the next five games, all wins, and had 103 yards rushing and three touchdowns in a first-round win over Gladstone. Expect a much closer game between these teams this time.

Quick stat: These teams met just four weeks ago, when the Cougars traveled to Eugene and edged the Spartans 38-33, giving Cascade a 4-3 lead in the all-time series.

Quick stat: The Vikings’ 45-6 victory over Blanchet Catholic in Round 1 snapped a five-game playoff losing streak dating to their 45-40 defeat to La Salle Prep in the 20111 Class 4A state final.

First impression: Can the Challengers, who won the 3A Showcase title in April, slow record-setting receiver Braydon Thornton, who has caught 17 touchdowns this season — including a state-record seven in a Week 6 victory over Pleasant Hill? These teams met in Week 4, with Siuslaw rallying from 10 points down in the fourth quarter for a 38-34 victory.

Quick stat: The Hawks earned their first state playoff win since 2000 when they took down Amity 36-6 last week.

First impression: Warrenton senior Hordie Bodden Bodden might have the most unique name in Oregon high school football, but it’s his game that’s making a name for him. He has thrown for 1,965 yards and 21 touchdowns — including 175 yards and two scores in a first-round win over Philomath — and run for 778 yards and 13 TDs.

Quick stat: The defending champion Eagles were the only lower seed to win in Round 1, eking out a 7-6 victory at Dayton.

First impression: Santiam Christian’s title defense hasn’t gone quite as planned, making the playoffs as one of two at-large qualifiers, but the Eagles will be a tough out for a Lancers team enjoying its best season since 1996 paced by junior quarterback Jace Johnson (1,849 passing yards, 28 TDs).

Quick stat: This will be the fourth meeting between these far-flung 3A powers and first since the 2018 semifinals, when the Columbians won 40-13 en route to the state title.

First impression: Can the Vikings slow Rainier senior Stone Ware, who ran for 278 yards and three touchdowns on 20 carries in the Columbians’ 34-6 first-round win over Vale? Ware has three games of more than 300 yards rushing this season.

Quick stat: The defending champion Mustangs have won 28 consecutive games—the longest current streak in the state—including a 39-0 victory over the TigerScots in Week 5.

First impression: For Weston-McEwen to snap a 10-game losing streak in the series dating to 2011, it’ll need to solve a Heppner defense that has posted five shutouts and allowed 6.6 points per game.

Quick stat: The Lions’ 12-6 victory at No. 5 Knappa last Friday was the program’s first playoff win since 1965, when they won the B state championship.

First impression: Two years ago, Jefferson went 1-8. Now, the Lions find themselves in the quarterfinals for the first time in more than a half-century. They’ll face a Red Devils team that posted its first playoff shutout since 1970 by beating Monroe 44-0.

Quick stat: The Tigers last week earned their first playoff win in the past 15 seasons, erasing a 12-0 third-quarter deficit to defeat Oakland 16-12 and avenge a Week 9 loss to the Oakers.

First impression: These teams met in a Week 4 league game along the Oregon Coast, with the Honkers pulling out a 26-20 victory that enabled them to win the league title. With this game in the high desert, Lakeview has a slight edge in the rematch.

First impression: Gaston now gets the other half of that 2018 championship game, facing a Kennedy team that followed that title run with a loss to Heppner in the 2019 final. The teams met in Week 1, with the Trojans winning 34-6.

Quick stat: These teams have combined to win the past six OSAA eight-man championships, with the Antelopes’ titles in 2014 and 2019 sandwiching the Rangers’ four-year run.

First impression: Adrian romped to a 62-6 victory over Dufur in the league championship game two weeks ago at Eastern Oregon University. The Rangers’ touchdown was one of only four the Antelopes have allowed all season. Don’t expect a much different result the second time.

Quick stat: The Irish hadn’t made the postseason since 2005 and earned their first playoff win since 1979 (and second ever) with a 72-30 victory over Imbler last week.

First impression: Could Waldport continue its magical run after making the 300-mile bus trip to tiny Merrill in south-central Oregon? It’ll have to slow Raiders quarterback Chase McAuliffe, a sophomore who threw for three touchdowns and ran for two in a 38-0 first-round win over Camas Valley.

Quick stat: The Buckaroos have scored a 1A-leading 558 points this season, with the 44 points they scored in a Round 1 win over Ione/Arlington their fewest since a Week 3 loss to Powder Valley.

First impression: St. Paul is in the quarterfinals for the 11th consecutive appearance in the eight-man playoffs (the Buckaroos were 2A from 2014-17) and should have enough offensive firepower to get past the Mustangs.

Quick stat: The Bobcats notched their first playoff win in the past 15 seasons last week by defeating Enterprise 42-6.

First impression: Myrtle Point enters on a six-game win streak, but for the visitors to make the 500-mile bus ride home a happy one, they must find a way to slow Badgers senior quarterback Reece Dixon, who threw for 317 yards and five touchdowns in the first half of a first-round win over Perrydale.