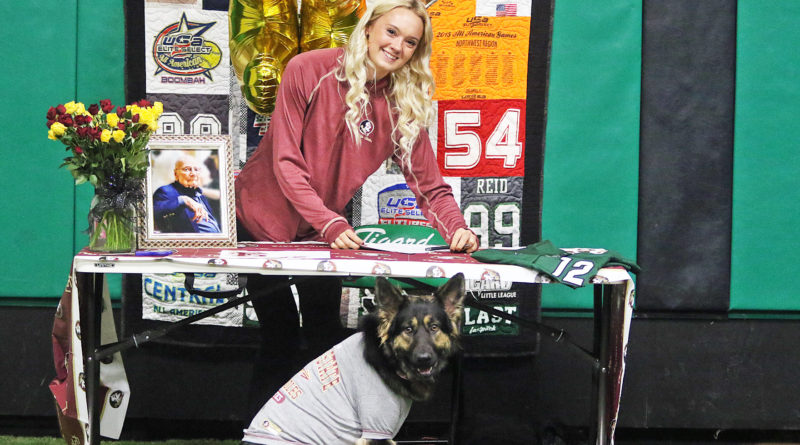 Makenna Reid will be moving away in the near future.

Reid, a Tigard High School senior, made her future move official as she signed a national letter of intent to play college softball at Florida State University, located in Tallahassee, Fla., in front of friends, family, coaches, teammates and her dog during a ceremony held in the Tigard softball practice barn Wednesday.

“It means a lot to me,” Reid said as she was enjoying a slice of cake, which was decorated in Florida State colors. “I was originally committed to N.C. State (North Carolina State University), so this is a big difference, and a big change. But I’m really excited to get onto the campus and meet with the coaching staff. It feels like the right fit.”

Reid will be joining a Florida State squad that went 49-13-1 in 2021 on its way to reaching the championship series of the Women’s College World Series.

“I like the family aspect of it, and I’ll develop as a pitcher,” Reid said, regarding why Florida State was the right choice for her. “I know it’s the right place for me as a pitcher, and as a person.”

But, of course, with that choice comes a move clear across the country.

“I like it. I have family down there, my grandparents and my cousins,” Reid said. “I also really like the state of Florida. I’ve been there multiple times. I like fishing, I like the sun, so I’m really excited about it.”

And it sounds like the Seminoles are excited to have Reid be part of their program.

“Makenna’s recruiting journey has been very unique. She is an old soul and a student of the game,” Florida State coach Lonni Alameda said on the team’s website. “I feel she will thrive in this teaching environment. She is a left-handed pitcher that will bring a different look and complement our staff. We can’t wait to get her on campus.”

In Reid, Florida State will be getting a pitcher who has been a standout in the Tigard area since she played Tigard Little League softball. The hard-throwing left-hander has really started to shine as a pitcher for the Tigard High School team.

This past spring, in a shortened, revised season, Reid helped lead the Tigers to the Three Rivers League championship with a 10-2 league record (16-2 overall).

Reid might have been at her best April 21, when she threw a no-hitter, striking out 17 batters and walking just one, in a 2-0 win over rival Tualatin in a Three Rivers League game at Tualatin High School.

In addition to all of those accolades, Reid also will get to realize a long-time ambition — playing college softball.

“It’s always been a goal,” Reid said. “I didn’t exactly know where I was going to end up, but I’m happy with where I’m going.”

She’s also happy that she got to make it official during Wednesday’s signing ceremony.

“It was really special,” said Reid, who seemed to get emotional when talking to the crowd about her father, Chris Reid, before signing the letter of intent. “I’m kind of happy I got to do it on my own, here in the Tigard barn where I practice all the time. I practiced here last night. And I’m just happy that everyone came, and that my dog (Raleigh, ‘soon to be renamed Tallahassee’) was here. It all worked out.”

Before moving on to Florida State, Reid has something else on her mind — her senior softball season at Tigard.