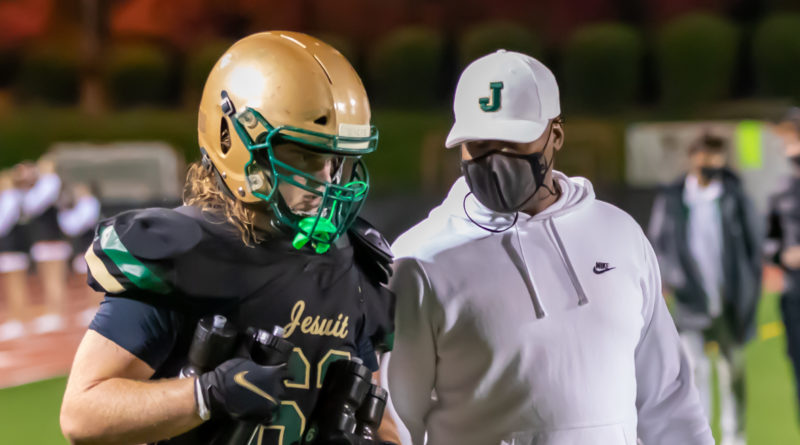 It hasn’t taken long for the Burtons to make their mark at Jesuit High School.

It’s been a winning combination for the ninth-seeded Crusaders (9-1), who are set to take on No. 8 Clackamas (10-1) on Friday night in the second round of the Class 6A state playoffs. Both Burtons are enjoying the ride.

“Just that I ended up coaching him, it’s been a blessing,” Nigel said. “I’m having a lot of fun with it.”

Nigel, a former Oregon State assistant under Mike Riley who guided PSU to a 21-36 record from 2010-14, has been a Pac-12 Network football analyst since 2015. When Jesuit had an opening on its coaching staff before the 2021 spring season, one name came to mind for head coach Ken Potter.

“I’ve known Nigel for a long time … and I’ve been around him in a lot of different settings,” Potter said. “I asked him if he would like to help coach at Jesuit, and he said he’d love to. It’s really worked out.”

Last spring, Nigel coached the varsity defensive backs and wide receivers while Jace began the season on the freshman team. Jace received a promotion to varsity for the Crusaders’ Week 4 game against Mountainside and was asked to shadow Andrew Simpson, one of the state’s most dangerous receivers.

Jace held his own on defense and even forced a fumble in the 21-14 overtime victory. He’s been a varsity staple ever since.

“Going from the freshman team to varsity to covering one of the best receivers in the state just like that, it was a tough experience,” said Jace, who caught three touchdowns last week in Jesuit’s first-round playoff win over Liberty. “But I think I did all right.”

Added Nigel: “At that moment, I went from being his coach to being a parent, and I was scared! Not about him getting hurt or anything; I just didn’t want him to lose his confidence. And to the kid’s credit, he stepped up and caused a big fumble. … He just keeps rising to challenges.”

After the spring season, Nigel took over as Jesuit’s defensive coordinator while Jace was set to play major roles on both sides of the ball.

Nigel has observed two key differences between coaching at the high school and college levels. High school kids tend to require less day-to-day mentoring because they still live with their parents. From a football perspective, teaching can be more difficult in high school due to less available practice time.

“At the Division I level, all those kids aspire to play in the NFL, even the ones that have no chance,” Nigel said. “At the high school level, you have kids who know they will never play past high school who go, ‘I know I’m not going to start, but I just want to be part of the team, find a role, help and be with my friends.’ That’s different, and it’s pretty touching.”

Potter, in his 35th season as head coach at Jesuit, praised the former University of Washington safety’s ability to teach high-level concepts in a simple way.

“There’s never a time in this world where you can’t continue to learn,” Potter said. “Even though I’ve been here a long time, Nigel brings a wealth of experience from having coached a lot of different college levels. Breaking it all down for the high school level is something I think he’s developed well.”

Jace said his dad coached him at times in youth basketball and football, but varsity football is a different beast. The Crusaders are undefeated since a Week 1 loss to West Linn, and Jace has been making big plays every game.

“It’s really cool,” Jace said. “I feel like I get more help because if I don’t understand something, I don’t have to wait until the next day. I can ask my dad about situations and he’ll be honest with me about how I played or how I practiced. So, it’s been good, other than when I have a bad practice. Those car rides home motivate you to not have a bad practice.”

The unpleasant car rides have been few and far between for the Burtons. Potter praised Jace for his continued improvement at practice, a telltale sign of hard work. Nigel is relishing the chance to have regular interactions with Jace’s classmates in the halls and at practice.

“Most parents know their kids’ friends’ names and might know a little something about them, but I’ve actually been able to forge relationships with my son’s closest friends,” he said. “It’s pretty cool to just walk around his high school and his buddies are saying ‘hi’ and talking about whatever is on their minds. Most parents don’t get that.”

Nigel wouldn’t rule out a return to college coaching at some point, but his current focus is purely on Jesuit. He wants to see Jace fulfill his lifelong dream of playing college football and is determined to aid him in that journey.

After that, who knows? But that’s off in the distant future, and the Crusaders have a state title to chase.

“I’m here for two reasons: because I love my son and I want to help him, and there’s nobody I respect more than Ken Potter. Those are the two reasons,” Nigel said.

“I still have friends coaching, and I’m getting so old now that my friends are head coaches. Maybe one day (I’ll go back to college), but right now I want to help Jace with what he wants to do. I think all parents just want to help their children reach their goals.”

Quick stats, what to know for every Round 2 matchup