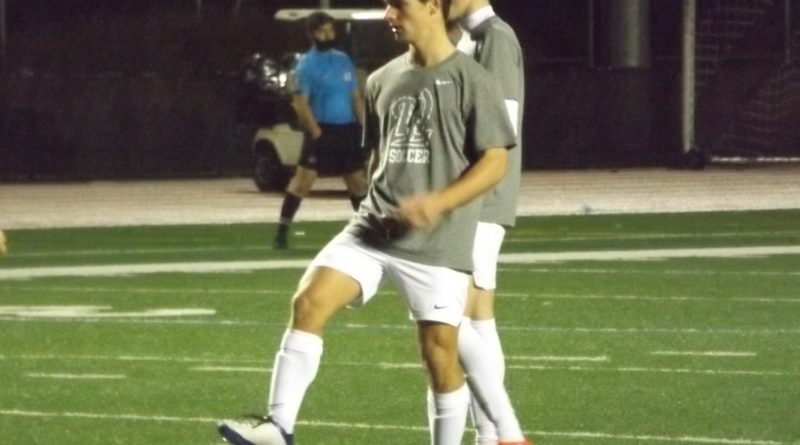 As Jesuit’s last-gasp header trickled wide of the right post and the final seconds ticked off the clock in Tuesday’s Class 6A boys soccer semifinal, the West Linn bench emptied onto the Cronin Field turf.

The Lions rushed to the west end of the field and engulfed goalkeeper Tyler Davis, who made several point-blank saves in the second half to secure their 1-0 victory and the program’s first trip to the state championship match.

Davis was still in a state of disbelief after the team broke its postgame huddle.

“I never thought this kind of interview would happen,” said Davis, a senior who had seven saves, including five in the second half. “It’s a great feeling, like there’s nothing better.

“We wouldn’t want it any other way. We’ve been playing with those kids for as long as some of us can remember, and to come in here and knock them off, that’s got to be one of the sweetest feelings ever.”

While Davis could hardly contain himself, teammate Luke Tinsley — whose sixth goal of the season, with 1:40 remaining in the first half, stood up as the game-winner — hardly broke a smile afterward.

“Obviously, we still have work to do,” said Tinsley, who spent the past two years playing for the Timbers Academy. “We have to stay focused as a team. We have a job to do, and we’ve got to stick it out to the end.”

Tinsley was referring to Saturday’s state final, where they’ll meet top seed Summit, a 3-0 winner over Grant in the other semifinal, at 4 p.m. Saturday at Hillsboro Stadium.

It’ll be the Storm’s third consecutive appearance in the 6A final, while sixth-seeded West Linn’s previous semifinal berth came eight years ago.

“It’s going to be a really good game,” Tinsley said. “They’ve been the best since my freshman year, and it’s just going to be really fun to get out there and play them.”

Two years ago, the Lions (15-1-2) went 8-7 and lost in the first round. During the spring season, they finished 4-3-4, but one of those ties was on Jesuit’s field, which gave them confidence they could pull out a victory Tuesday.

“As our coach said then, we’re going to see these guys next year — and deep,” Davis said. “And it’ll be a different result.”

The Crusaders (14-4), who entered the match as the No. 2 seed and seeking their 20th trip to the final, controlled possession for much of the game. They held a 17-6 shot advantage, including 7-2 in shots on target.

However, they couldn’t turn that possession into the goal they needed as West Linn posted its sixth consecutive shutout, including four during its playoff run.

“We just didn’t convert,” said junior striker Drew Pederson. “We always knew that they would be tough. They played well defensively, and their goalie was pretty good.”

Davis was more than good on this night. It started in the 35th minute, when he dived left to get a hand on Spencer Carle’s free kick from 25 yards, knocking it out for a throw-in.

Three minutes later, that save loomed large when Tinsley collected a loose ball in the penalty arc and fired a low drive through traffic inside the left post.

“Dro (Alejandro Valdes) kind of shielded the ball, and I just came out and had an open shot,” Tinsley said.

Davis came up big in the 68th minute after spilling a save on a long drive, swallowing up Pederson’s rebound shot.

Six minutes later, Jesuit had another great look on goal from 10 yards, but Davis anticipated the play and made the save.

“Tyler was the player of the match,” said third-year Lions coach Steve Ancheta. “Our defense really held their own and worked hard to get a really gutty victory.”

The match ended with 10 players on each side as first Jesuit and then West Linn lost players when they received a second caution.