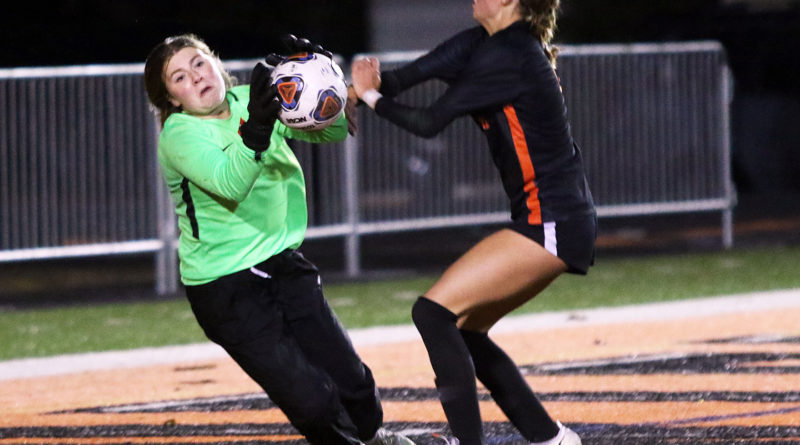 Thanks to a late goal, the Grant girls soccer team is moving on to the Class 6A state championship match for the second time in school history.

The Generals, with senior Caprial Loescher scoring off an assist from senior Elle Frazier with 3 minutes and 45 seconds left in the second half, scored a 1-0 win over Sunset in a state semifinal match Tuesday at Delta Park’s Strasser Field.

Grant improved to 16-1-1. The Generals will get a chance to win their first state championship Saturday, when they face Beaverton in the Class 6A title contest, set to be played at 7 p.m. at Hillsboro Stadium.

Wilsonville earned a spot in the Class 5A state championship match by getting a 2-0 win over Crescent Valley in a semifinal played Tuesday at Wilsonville High School.

Antonson, who became the top girls high school goal-scorer in Oregon history during the Wildcats’ 6-0 quarterfinal win over Putnam on Saturday, scored both of the team’s goals in the semifinal victory.

Wilsonville improved to 17-0-1. The Wildcats, looking to win their first state title, will face Northwest Oregon Conference rival La Salle Prep in the Class 5A championship match Saturday at 10 a.m. at Hillsboro Stadium.

La Salle Prep had to come from behind to get a 3-2 win over North Eugene in a Class 5A semifinal played Tuesday at La Salle Prep.

Woodburn advanced to the Class 4A state championship match by getting a 1-0 win over top-seeded Gladstone in a semifinal played Tuesday at Gladstone High School.

Elizabeth Valdez Vazquez scored the only goal, coming off a cross from Crystal Garcia, 3 minutes and 30 seconds into the contest.

Gladstone tried to answer with close looks coming off of corner kicks and direct kicks.

With the win, and its 10th shutout of the season, Woodburn improved to 12-0-4. The Bulldogs, looking to win their second consecutive state title, move on to face Hidden Valley in the Class 4A state championship match, which will be played Saturday at 7 p.m. at Liberty High School in Hillsboro.

The Hidden Valley girls soccer team stayed unbeaten and advanced to the Class 4A state championship match by edging North Marion 2-1 in a Class 4A semifinal Tuesday at Hidden Valley High School in Grants Pass.

Hidden Valley took a 1-0 lead when Hannah Rommes scored on a follow-up shot after an attempt by Skylar Willey was blocked by a diving North Marion goalkeeper in the 21st minute. The Mustangs upped their lead to 2-1 when Gabby Heverly scored on a throw-in assist from Aja LaPan in the 41st minute.

North Marion got a free-kick goal by Dominique Huapeo in the 76th minute, making the final score 2-1.

Hidden Valley, the Skyline Conference champion and the No. 2 team in the final OSAA power rankings, improved to 15-0-2. The Mustangs will play Woodburn in the Class 4A state final Saturday at 7 p.m. at Liberty High School in Hillsboro.

Olivia Faucera helped lead the way for the Aardvarks with four goals and two assists. OES seniors Annie Hendrickson and Nadia Schwartz scored in the seventh and eighth minutes, and the Aardvarks never looked back. Zoe Bullard and Mia Robertson anchored the back line for OES, limiting the work for goalkeeper Cameron Gabrielson, who helped preserve the shutout.

Top-seeded OES improved to 11-2. The Aardvarks will face Catlin Gabel in the Class 3A/2A/1A state championship match Saturday at 10 a.m. at Liberty High School in Hillsboro.

Catlin Gabel took charge in the first half and went on to post a 4-0 win over Riverdale in a Class 3A/2A/1A semifinal Tuesday at Catlin Gabel.

Lola Diaz-Gonzalez started the scoring for the Eagles when her cross led to a Riverdale own goal in the 18th minute. In the 37th minute, Campbell Swaim scored off an assist from Annika Sitori, giving Catlin Gabel a 2-0 halftime lead.

In the second half, Catlin Gabel got a goal by Diaz-Gonzalez, off an assist from Kendrick Dahlin, and another goal by Swaim, off a pass from Charlotte Long, to wrap up the 4-0 victory.

Catlin Gabel improved to 13-2-1. The Eagles, who will be trying for their second consecutive state championship, will face Oregon Episcopal School in the Class 3A/2A/1A title tilt Saturday at 10 a.m. at Liberty High School in Hillsboro.