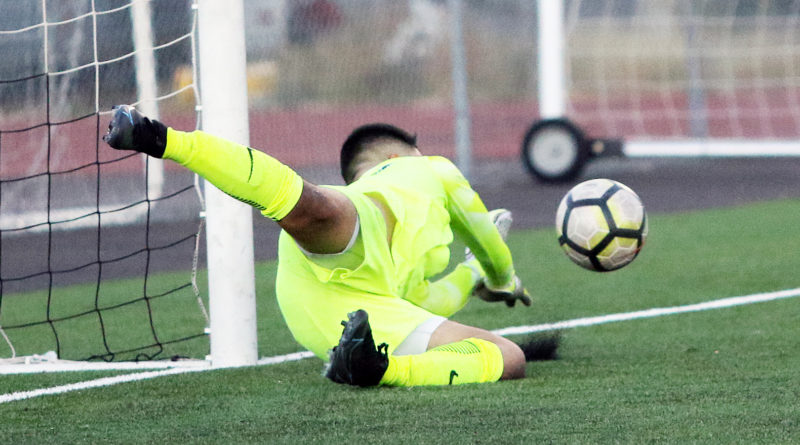 The Storm (16-0-1), who moved up to No. 8 in the most recent United Soccer Coaches national rankings, posted their fourth shutout of the playoffs and reached the 6A state final for the third consecutive season by beating PIL champion Grant in Bend.

Mountain Valley player of the year Nani Deperro opened the scoring at 21:23, latching onto a pass from Zach Custer for his 31st goal of the season. Deperro trains with the Portland Timbers’ U19 team during the offseason.

Two minutes later, Alex Grignon doubled the Storm’s lead with an unassisted goal. Rory McKee tacked on an insurance goal 10 minutes into the second half, with Bowen Teuber getting the assist.

Soren McKee made four saves to record the shutout.

The fifth-seeded Generals finished the season 14-3-2.

Luke Tinsley scored the game’s only goal, Tyler Davis made seven saves, and the sixth-seeded Lions knocked out the second-seeded Crusaders at Jesuit High School. Read the full story here.

The No. 1-seeded Falcons (15-1-1), ranked No. 10 in Region VIII by United Soccer Coaches, earned the chance to defend the state title they won two years ago by defeating the fourth-seeded Vikings (12-2-3) in Milwaukie.

Mizael Harris had a goal and two assists, boosting his season totals to 17 goals and 18 assists, and La Salle Prep built a 3-1 halftime lead en route to its eighth consecutive victory.

The Falcons will play Corvallis at 1 p.m. Saturday at Hillsboro Stadium in the championship match.

“We’re humbled by the experience,” La Salle Prep coach Monty Hawkins said. “They’ve been laser focused throughout the season on getting to this day and defending their title. Every time they’re asked to answer the bell, they’ve stepped up.”

Center back Jeffrey Richter opened the scoring in the 20th minute, running onto Harris’ free kick from 30 yards and volleying the ball across the goal into the top-left corner for his fourth goal of the season.

Seven minutes later, Harris got onto the end of a long free kick and beat a couple of defenders to make it 2-0. In the 33rd minute, Luke Bjelland pounced on a loose ball from close range for his third goal of the season.

Jael Jacobo pulled one back for North Salem two minutes before halftime, but the Falcons sealed the victory with 14 minutes left when Lance Sheffield volleyed in a cross from Harris for his 10th goal of the season.

“It was a good team effort,” Hawkins said. “A lot of guys stepped up tonight.”

In Eugene, the No. 3-seeded Spartans (12-3-2) rallied from one-goal deficits on three occasions before ousting the No. 2 Wolverines on Kellen Filger’s curling shot from outside the penalty area with three minutes remaining.

“I’m just so proud of our group,” Corvallis coach Chad Foley said. “To come back three different times shows a lot of resilience and guts.”

Willamette (15-2) grabbed the lead just 30 seconds into the match, taking advantage of a giveaway along the Spartans’ back line with a goal by Carlos Ariel De Dios Cruz.

Ben Perez tied the score in the 14th minute with his third goal of the season, but the Wolverines again cashed in on a mistake deep in Corvallis’ end to retake the lead in the 32nd minute.

“They put a lot of pressure on our back line, and we didn’t handle it well at the beginning,” Foley said.

However, the Spartans wasted little time to equalize, with Ryan John scoring his team-high 15th goal a minute later, sending the game to halftime tied 2-2.

Papa Yansane put Willamette back on top seven minutes into the second half, dribbling through the middle of the field and slotting a low shot to the back post.

The Spartans tied the score in the 74th minute, with MWC player of the year Jesus Pulido — normally a defender but moved to forward several minutes earlier to get him involved in the attack — scoring off an assist from Colin Smith. It was Pulido’s fourth goal of the season and Smith’s seventh assist.

Filger then scored his fifth goal of the season to send Corvallis to its third final in the past four postseasons, where it’ll face La Salle Prep in a rematch of both teams’ season opener. The Falcons won that game 4-1.

Anson Shimeall, who assisted on Filger’s game-winner, had three assists in the match to give him four for the season.

Dylan Bell scored in the 97th minute off a free kick from 40 yards to lift No. 2 seed Philomath (16-1) past North Marion at Crescent Valley High School to earn the program’s second appearance in a state final.

Philomath won the title in its only other trip in 2012. It’ll play Hidden Valley at 4 p.m. Saturday at Liberty High School in Hillsboro.

However, Mark Grimmer scored with four minutes left to send the match to overtime.

“It was a great season overall,” said North Marion coach Carlos Perez, whose team won the Oregon West title and lost only to Philomath twice and to Stayton. “I thought we should have been a higher seed than 6, but we made the most of it in the playoffs. We knew we had a special team, and we took it as motivation, since I think many people underestimated this team.”

Theo Bergman had a goal and an assist, and No. 9 seed Hidden Valley (13-4) erased an early 2-0 deficit to defeat 12th-seeded Molalla and advance to its first final since 2010.

Mason Klipfel scored on a through ball from Bergman just before halftime to draw the Mustangs within 2-1 at the break. Bergman earned a penalty kick converted by Ronan Hodge four minutes into the second half to tie the score.

The Mustangs scored twice in short succession to take a 4-2 lead. First, Bergman latched onto a long punt by goalie Spencer Fiske and slipped the ball past the keeper. Two minutes later, Tristen Winkler controlled a cross by Aiden Fiske and scored in the upper-right corner.

“This team has been a team of resilience,” said Mustangs coach Alan Rojas. “They have not won every game, but they have learned how to rally. They just need a little spark to play on fire.”

Molalla finished the season 9-6-3 but not before knocking off a couple of league champions in Valley Catholic (Cowapa) and Henley (Skyline) on the road in the playoffs.

“It was a season of ups and downs,” coach Ryan Gates said. “The players played for each other and believed when a lot of others didn’t. They can hold their heads up high as 12 seeds rarely make it as far as they did.”

These two Southwest Portland rivals had met in the previous two 3A/2A/1A finals, but this time they met in an epic semifinal clash at Catlin Gabel, which came down to senior goalkeeper Dillon George saving a penalty kick with seven seconds remaining to preserve the win for the top-seeded Eagles (16-0).

“This was by far the closest match we have had this year, and I think the team really needed to see what they could do under pressure, though my heart could have done without the drama,” said Catlin Gabel coach Peter Shulman, whose team will play for a third consecutive title at 1 p.m. Saturday at Liberty High School against Dayton.

“We were tested to the limit tonight by a great performance by the Aardvarks. It was great playoff soccer, with exceptional determination, high-level skill, and a hard-fought but sportsmanlike contest between intense rivals.”

The Aardvarks (12-5) scored first when Torben Karl got on the end of a low cross in the 23rd minute. The Eagles tied it just before halftime when Felipe Rueda Duran blasted home an Elijah Widdows pass from 20 yards.

OES scored off a counterattack in the 64th minute to retake the lead, but Aidan Sheeran-Hahnel volleyed home the tying goal two minutes later.

“Sophomores Rendon Benitez and Owen Jones were especially strong, but it took every last man and bit of energy that we had to pull it out,” Shulman said. “There is no doubt that this will make us a better team, and we’re excited to have earned the chance to compete for the championship.”

Senior captain Daniel Anguiano scored on a 21st-minute penalty kick, and senior Tyler Spink beat the keeper through his legs two minutes later as the No. 7 Pirates (14-3) won in Boardman to advance to their first OSAA state final.

Dayton had been building toward this performance since the spring, when it reached the final of the 3A/2A/1A culminating-week tournament, but got the biggest win in school history against a Riverside (15-2) team bidding for its first final appearance since winning the 2017 title.

“Riverside was a great team and gave us a tough task, but our guys were up for the challenge,” said Dayton coach Jony Miramontes. “We didn’t hold anything back and stepped up to the occasion. We fought for every ball and worked as a team today.”

Goalie Marcos Ceja made several critical saves for the Pirates, and Miramontes also praised Anguiano’s work on defense, crediting the district player of the year “with great covers and organization. He made it very difficult for Riverside to create plays.”