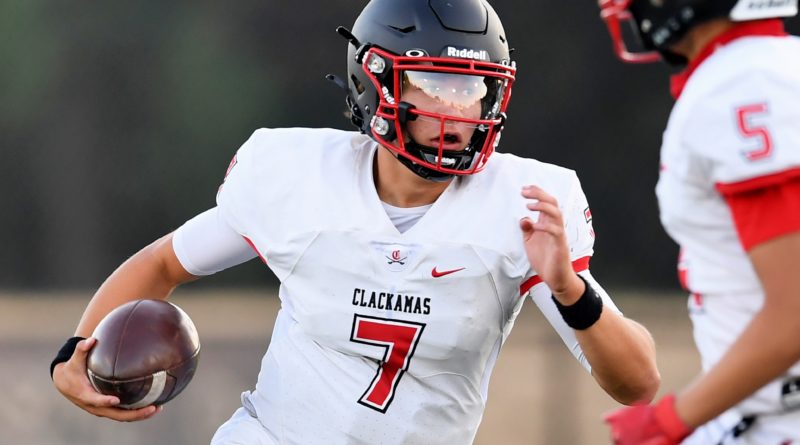 The Oregon high school football playoffs kicked off last week with first-round action around the state.

Here’s what stood out during the opening round of action.

There were many impressive performances in Round 1 of the OSAA Class 6A state football playoffs.

Roseburg notched its first playoff win since 2012 behind a big night from Logan Klopfenstein.

Jordan Fisher ran for 296 yards and six touchdowns for Westview in its first playoff victory in the past five years.

Perhaps no performance was more impressive, however, than the collective effort put together by No. 32-seeded Newberg to not only stave off a potential running clock against Lake Oswego but also put a scare into the top seed.

The Tigers trailed 42-10 with 8:24 left in the third quarter and 49-18 six minutes later. One more Lake Oswego score would have triggered the mercy rule.

Instead, the Tigers ripped off 22 fourth-quarter points and recovered an onside kick with 2:59 to play. They drove to the Lakers 3-yard line before a fumbled snap killed their dream of the incredible comeback, with Lake Oswego escaping with a 49-40 victory.

“It was certainly inspiring to see these kids rise to the challenge, especially when so many wanted to throw it in,” said first-year coach Jeremy Johnson.

Yes, the Tigers finished 3-7, but five of those losses were within six points, and they won three must-win games to grab the Pacific Conference’s final playoff berth.

“We hung with many of the best teams in the state,” Johnson said. “The fight, the resilience in these kids is deep through their core. It just didn’t prevail enough times earlier in the season.”

While the Tigers join 30 other teams on the sidelines the rest of the postseason, Johnson is excited about the program’s future and building on the legacy created by former coach Kevin Hastin — whose Sherwood team is one of 16 still alive after its first-round win at Sandy.

“The kids need to reset now and realize what they have to do to prepare for next year,” Johnson said. “The time for next season starts now. They need to transition the resiliency they showed into so many of the small things you need to do in the game of football.”

‘I’m really proud of how that kid played.’ Backup QB leads Clackamas to second round

When Clackamas starting quarterback Blake Baker went down with an injury early in last week’s 6A first-round game against Sunset, the Cavaliers turned to junior Mateo Maehara, a little unsure of what to expect.

Maehara had moved to wide receiver and defensive back with Baker’s emergence as the starter, getting most of his practice reps behind center running the Wildcat.

The Cavaliers ended up not missing a beat with Maehara in control. He was 7 of 15 for 132 yards and two touchdowns, and the No. 8 seed beat Sunset 31-18 to advance to a second-round home game with ninth-seeded Jesuit on Friday.

“Mateo did a great job coming in with limited reps,” Clackamas coach James Holan said. “I’m really proud of how that kid played. He did a great job moving us down the field. He definitely brings an element with his feet and did a great job protecting the football.”

Holan said Baker is day-to-day with his injury and is hopeful he’ll be back for this week’s game.

“He’s a great football player and a huge part of our team and our success,” Holan said.

North Salem has suffered through some lean years of late.

The Vikings hadn’t had a winning season since 2004 before a three-game win streak to close the regular season secured a plus-.500 record and their first playoff berth in the past six years.

The good times will keep rolling for another week after Friday night’s 27-11 victory over Crater advanced them to the Class 5A quarterfinals for the first time since they shared the 1963 A-1 title with Grant.

“It is a great feeling to see that the work these kids have put in over the last couple of years has paid off,” North Salem coach Jeff Flood said. “It’s a new experience for our kids getting to play football in November, and we hope to keep building on that.”

Next for the Vikings is a matchup with No. 2 Silverton, which romped to a 42-7 victory over McKay. The teams met twice after North Salem dropped to 5A in 2018 and played in the Mid-Willamette Conference — the Foxes won both meetings before the Vikings moved to the NWOC West this year.

“I don’t think anyone looks forward to playing Silverton,” Flood said. “But we’re excited for the opportunity to go up against one of the best teams in the state.”

‘Our kids were calling out their plays.’ Dragons defense dialed in during first-round victory at Pendleton

When Pendleton scored an early touchdown in its 5A first-round matchup with Dallas at the Round-Up Arena, it figured to be the start of something big for the Buckaroos.

After all, they’d averaged 40.1 points per game in rolling to the NWOC East title and the No. 6 seed in the playoffs.

Instead, those ended up being Pendleton’s only points of the game. The Dragons scored in the second quarter on Logan Person’s 15-yard run and made their 7-6 lead stand up the rest of the way to earn their first playoff win since 2016.

“He had our kids dialed in on what they did offensively,” Jackson said. “Our kids were calling out their plays.”

The Dragons also limited Pendleton’s screen passing game, allowing just the one big play on the Buckaroos’ only score — a 65-yard pass from Collin Primus to running back Payton Lambert — with defensive lineman Demitri Harris picking off another screen.

Person finished with 10 tackles and the Dragons’ other interception. Owen Hess led the team with 11 tackles, two for loss, and Isaac Ostrom was credited with the third-down sack when the Buckaroos were flagged for intentional grounding after reaching the Dallas 9-yard line.

On the fourth-down play, James Partridge broke up the pass play in the end zone to seal the victory.

“We felt that if we forced them to throw the ball, we had the upper hand,” said Jackson, whose team will face MWC rival and No. 3 seed West Albany on Friday. “Our pass rush and coverage have been strong points for us in the second half of the season.”

4A favorites cruise through to quarterfinals

It comes as little surprise that the Class 4A bracket remains virtually intact after the first round of the playoffs.

The only “upset” in Round 1 saw No. 9 Henley make the long bus ride from Klamath Falls to Tillamook and knock off the eighth-seeded Cheesemakers 35-14. The Hornets’ reward is a quarterfinal matchup with top seed Marshfield, which posted its fifth victory of 40-plus points in a 43-0 rout of Madras.

The next closest margin of victory in the first round was defending champion La Grande’s 34-12 win over Gladstone. The average margin was 34 points, including No. 2 Cascade’s 67-24 victory over Astoria — the Cougars’ sixth game scoring 60-plus points.