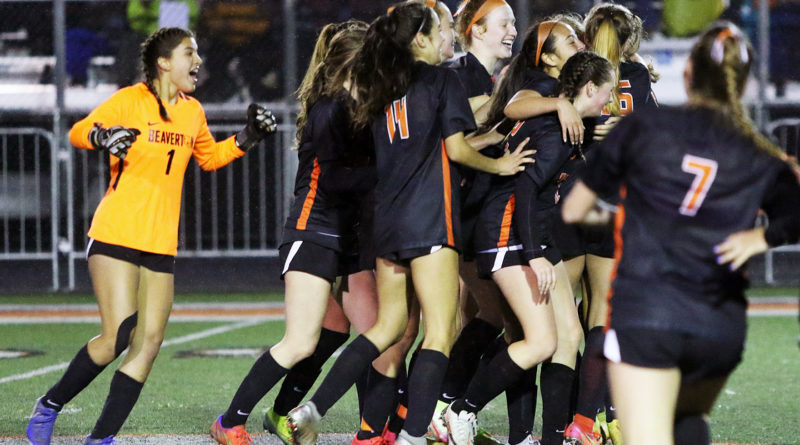 Sure, the Beaverton girls soccer team played 80 minutes of impressive soccer in the semifinal round to earn a spot in the Class 6A state championship match.

But the Beavers say, in reality, the path to the title tilt started long ago — maybe many years ago.

Beaverton saw its long-time goal become reality, as it bested Forest Grove 2-0 in a hard-fought Class 6A state semifinal match played in front of a large, enthusiastic crowd Tuesday at Beaverton High School.

“I think this is a dream come true, for sure,” said Beaverton senior Lauren Ashe, who scored the first goal of the match. “I feel like our girls have been working really hard. A lot of us have been playing together since we were eight years old. We’ve been dreaming of something like this, to finally put our work ethic into action, so I’m really proud of everyone.”

“It was super exciting,” said senior defender Hannah Rice, who helped the Beavers get the shutout. “I feel like we’ve been working for this ever since our freshman year, with our senior class, so it was just really exciting to be able to do this with them.”

“This is crazy,” said Beaverton senior Macy Deckert, who scored the Beavers’ second goal. “From the beginning of the season, this was our goal. This team is special, going through the years together, since our freshman year. I’m just so proud of everyone. We just can’t believe it.”

Beaverton, the No. 3 team out of the Metro League and the No. 5 team in the final OSAA power rankings, improved to 15-2-1. The Beavers advance to the Class 6A state championship match, where they’ll face Grant on Saturday at 7 p.m. at Hillsboro Stadium.

“It was crazy, because we’ve just worked so hard for this, and it’s insane that we’re going to the final,” Rice said.

“This was the best experience of my life,” Deckert said. “I’m so excited. I’m still riding high.”

Forest Grove, the No. 3 team out of the Pacific Conference and the No. 16 team in the OSAA power rankings, finished its season 12-3-3. The Vikings’ postseason run included an overtime win over top-seeded Jesuit and a penalty-kick shootout victory over Pacific Conference rival Sherwood on their way to earning the first state semifinal berth in program history.

“That means a lot. It’s the first time for our school, and we’re bringing home a trophy. So, we’re all super proud of that,” Forest Grove senior Lily Everson said. “This season meant so much to us. Previous years, we hadn’t been as close with each other, and I feel like this year we had a really strong connection. We knew the potential we had and that we could take it far.”

The Vikings wanted to take it even farther, while going up against an equally determined Beaverton squad.

The result was a defensive battle in the early minutes, with every possession being contested and opportunities being rare. Forest Grove junior goalkeeper Aleena Calvert shined in the first half, twice running out to grab the ball from a Beaverton player who had an open path to the goal. She jumped to grab a Beavers corner kick with 13 minutes and 17 seconds left in the first half.

As the half was winding down, Beaverton took advantage of one of the rare scoring opportunities. Ashe, taking a free kick attempt from 26 yards in front, drilled a hard shot past a diving Calvert and inside the left post of the Vikings goal, giving the Beavers a 1-0 lead with 8:18 left in the first half.

“I have to say, that was pretty exhilarating, scoring the first goal of the match,” Ashe said. “I feel like that was the push that we needed in order to get that win.”

Beaverton took the one-goal lead to the intermission.

The Beavers added to their lead early in the second half.

Beaverton senior Meg Unruh, from the left side, crossed the ball to Deckert, who was in front, to the right of the Forest Grove goal. Deckert, taking the ball with Calvert running at her, lofted a high shot from close range, with the ball bounding into the goal, giving Beaverton a 2-0 lead with 32:38 to play.

“Meg Unruh played a great ball over, and I just got on the end of it,” Deckert said.

“That was huge. We really needed that,” Ashe said of Deckert’s goal. “That showed that we were able to finish our opportunities.”

Forest Grove, trying to rally, created some opportunities, but the Vikings weren’t quite able to cash in.

Forest Grove had shots by senior Makena Speer, with 26:00 remaining, by Everson, with 20:31 to play, and by junior Sophia Broberg, with 13:47 left, with all three of those attempts being just barely off the mark.

“We came out here and we weren’t ready to give up,” Everson said. “We knew that in the second half that we had to come out better and play our style, and I think we did that.”

But Beaverton, which got one final shot on goal by Unruh with 3:09 to go, would soon be watching the clock, and counting it down, until the final whistle blew — igniting the Beavers’ victory celebration.

“This was super fun,” Rice said.

Beaverton had nine shots on goal and two corner kicks.

“Yeah, we were ready,” Ashe said. “Every game we’ve got to be ready. I feel like, ever since our slump in the Metro League (a tie with Southridge and back-to-back loses against Mountainside and Sunset), we don’t ever want to have that again, especially in the playoffs. This is our last season, so we want to leave it all out on the field.”

“We just really worked on playing as a team throughout,” Deckert said. “Defense, midfield, forwards, and it really showed. We were super connected, and it was just really great.”

The Beaverton defense, including junior Danika Kime, junior Katelyn Sanders, junior Natalie Drotzmann and Rice, among others, allowed Forest Grove two shots on goal, with senior goalkeeper Brielle Fernando making a save on both of those attempts.

“Everyone just gave 100 percent effort, trying the whole time, and we were really connected when we were on the field,” Rice said.

Forest Grove, which got shots on goal from sophomore Elise Broberg and junior Summer Hullinger, had one corner kick.

“This was so much fun,” Everson said. “We didn’t know what this was going to be like, and to have everyone out here supporting us meant a lot to us.”

Grant, the Portland Interscholastic League champion and the No 3 team in the OSAA power rankings, moved to 16-1-1 after getting a 1-0 win over Sunset in Tuesday’s other Class 6A semifinal.

“We’re just going to prepare for that,” Ashe said of Saturday’s championship match against the Generals. “It’s the finals; there are going to be a lot of emotions on the field. There’s going to be a lot of intensity in the stands. We just want to keep our heads straight and go into that game really strong.”

“We’re just going to come out with the same intensity we came out with today and just play our hardest, because it’s the seniors’ last game,” Deckert said.

“We just need to play how we’ve been playing, and we got it,” Rice said.