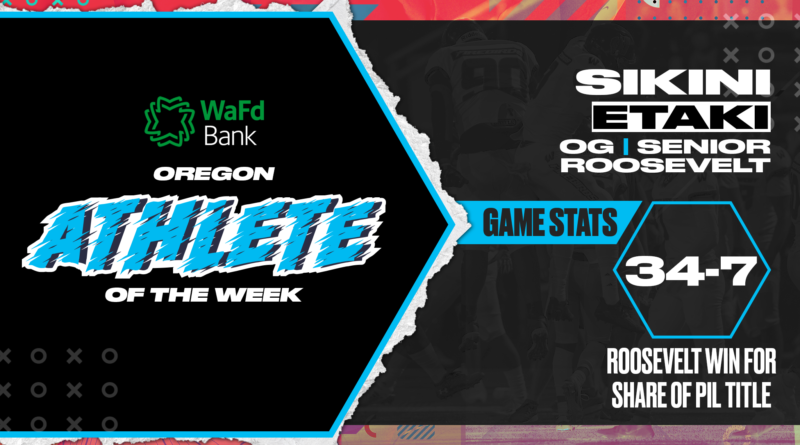 The senior was instrumental as the Roughriders limited Lincoln to 170 yards of total offense in a 34-7 victory that gave Roosevelt a share of the PIL crown.

Eteaki received 52.7% of the vote, beating out Churchill’s Chace Pence who finished second with 30.98%. West Salem’s Kaden Young finished third with 8.59% and Sherwood’s Nolen Scott finished fourth with 1.33%. There were over 26,000 votes tallied this week!

Jenna Albrecht, Ridgeview volleyball: Albrecht had 11 kills, three aces and five digs, leading the Ravens to a 3-0 win over Thurston in the first round of the 5A playoffs.

Benjamin Balazs, Sunset boys cross country: Balazs ran to victory at the Metro League district meet in a time of 14:55.40.

Myles Barton, Putnam football: Barton had 448 yards and seven touchdowns on 34 carries, leading the Kingsmen to a 55-41 win over The Dalles.

Bryce Bowers, West Albany football: Bowers had eight total tackles and an interception to lead the Bulldogs’ defense in their 41-27 win over Corvallis.

Hiro Diamond, Liberty football: Diamond rushed for 175 yards and four touchdowns and passed for 225 yards and another touchdown in the Falcons’ 49-39 loss to Sherwood. (story, photos)

Deacon Edgar, South Medford football: Edgar completed 11 of 13 passes for 252 yards and three touchdowns to help the Panthers secure third place in the Southwest Conference and an automatic berth in the playoffs by beating rival North Medford, 40-34.

Kennedy Fletcher, Lincoln girls soccer: Fletcher scored just before halftime to break a scoreless tie and added a second goal 13 minutes into the second half as the Cardinals defeated Liberty 5-0 in the first round of the 6A playoffs.

Elle Frazier, Grant girls soccer: Frazier scored four goals to give her 28 for the season and assisted on another as the Generals beat McNary 8-0 in the first round of the 6A playoffs.

Seth Glenn, Sherwood football: Glenn rushed for 145 yards and four touchdowns for the Bowmen in their 49-39 win over Liberty that clinched the Pacific Conference championship. (story, photos)

Hailey Heider, West Albany volleyball: Heider served 16 aces — including nine during a 13-point service run in the second set — to go with nine kills and five digs, leading the Bulldogs to a 3-0 win over Parkrose in 5A’s opening round.

Blakely Herbert, Cottage Grove volleyball: Herbert served out the final nine points of the match, including three aces, to seal the Lions’ 3-1 win over Tillamook in the 4A first round. She also had 22 digs.

Alden Himes, Glencoe boys soccer: Himes scored two second-half goals to help the Crimson Tide beat Clackamas 3-0 in the first round of the 6A playoffs.

Addie Hoover, West Linn volleyball: Hoover had 11 kills and 10 digs for the Lions in their 3-0 second-round win over Summit.

Brycen Indell, Thurston football: Indell led the defense with nine tackles, two of them for loss, as the Colts posted their fourth shutout in seven games, this one a 60-0 rout of North Bend that clinched the outright Midwestern League title. He rushed for 131 yards and a touchdown.

Sarah Jones, Sprague volleyball: Jones had 38 digs, including several phenomenal ones in the fifth set, as the Olympians outlasted Sherwood 3-2 in a thrilling second-round victory.

Laila Leaks, South Salem volleyball: Leaks had 46 assists and five blocks as the Saxons defeated McNary 3-1 in the second round of the 6A playoffs.

Ethan Lucore, Sandy football: Lucore rushed for three touchdowns to help the Pioneers lock up an automatic playoff berth with a 48-7 win over David Douglas.

Kalisa Lukovich, Nelson volleyball: Lukovich had a match-high 17 kills as the Hawks beat Roseburg 3-0 in the first playoff match in program history.

Eve Lynx, South Medford girls soccer: Lynx made five saves during a 60-second span to preserve the shutout as the Panthers beat Wells 1-0 in Round 1.

Zach Marostica, Sunset boys soccer: Marostica had a goal and two assists for the Apollos in their 3-1 first-round win against Grants Pass.

Shinjiro Metzger, Sunset boys soccer: Apollos coach Conrad Buck called Metzger “a beast all over the field today, playing at left defense, left wing and center forward at different times and being a dominant presence at all three” as Sunset scored a 3-1 victory over Grants Pass in the first round of the playoffs.

Dom Montiel, Marshfield football: Montiel passed for seven touchdowns and 402 yards to power the Pirates to a 48-41 win over Marist Catholic, wrapping up the Sky-Em League championship for Marshfield.

Malakai Nutter, Bend football: Nutter had 20 carries for 191 yards and three touchdowns to power the Lava Bears to a 49-3 victory against Mountain View.

Trever O’Leary, Glencoe football: O’Leary broke a 14-14 tie with a 73-yard touchdown run on the final play of the third quarter, lifting the Crimson Tide to a 28-21 victory against McMinnville.

Chace Pence, Churchill football: Pence was 19 of 23 for 251 yards and three touchdowns for the Lancers, helping to lift the team to a 35-0 win against Willamette.

Emma Pruitt, Oregon City volleyball: Pruitt had a 14-point service run that blew open the third set as the Pioneers fought off Lincoln for a 3-0 victory in 6A’s opening round. She finished with 10 kills.

Griffin Rea, South Eugene boys soccer: Rea assisted on Zac Walker’s first-half goal, then scored two in the second half to lift the Axe to a 4-0 first-round win over McNary.

Olivia Rosborough, Silverton volleyball: The Foxes got 22 kills and four blocks from Rosborough in their 3-1 win over Redmond in the first round of the 5A playoffs.

Malik Ross, Tualatin football: Ross ran for a season-high 183 yards and two touchdowns and had a scoring catch for the Timberwolves in their 49-13 win over rival Tigard.

Jeremiah Schwartz, Ridgeview football: Schwartz gained 140 yards and scored a touchdown receiving for the Ravens in their 42-0 win over rival Redmond. On defense, he had an interception.

Nolen Scott, Sherwood football: Scott returned the opening kickoff 97 yards for a touchdown and ran 20 yards for what proved to be the decisive touchdown as the Bowmen wrapped up the Pacific Conference title with a 49-39 win over Liberty. (story, photos)

Abby Sorensen, Sprague volleyball: Sorensen had a match-high 22 kills in the Olympians’ thrilling five-set win over Sherwood in Round 2 of the 6A playoffs.

Desiree Tupua, Siuslaw volleyball: Tupua had 18 kills, nine blocks and 12 digs, leading the Vikings to a 3-0 win over North Marion in the first round of the 4A playoffs.

Ellie Wallace, Nelson volleyball: In the first playoff match in Hawks history, Wallace had 37 assists and seven aces to help lead Nelson to a 3-0 sweep of Roseburg.

Shane Wood, Crater football: Wood completed 7 of 8 passes for three touchdowns as the Comets rolled to a 45-0 win over Ashland.

Kaden Young, West Salem boys soccer: Young scored all four goals for the Titans in their 4-3 first-round win over Liberty.

Logan Person, Dallas football: Person rushed for 155 yards and three touchdowns in the Dragons’ 29-13 win over Central. On defense, he had nine tackles, two pass breakups and one interception.

Owen Hess, Dallas football: Hess led the Dragons’ defense with 10 tackles, two pass breakups, one tackle for loss and an interception. He rushed twice for 31 yards and a touchdown in Dallas’ 29-13 win over Central.

Kayleigh Carpenter, South Salem volleyball: Carpenter had a match-high 18 kills and 13 digs, helping the Saxons beat McNary 3-1 in Round 2 of the 6A playoffs. She had 13 kills and 10 digs in a 3-0 first-round win against Sunset.