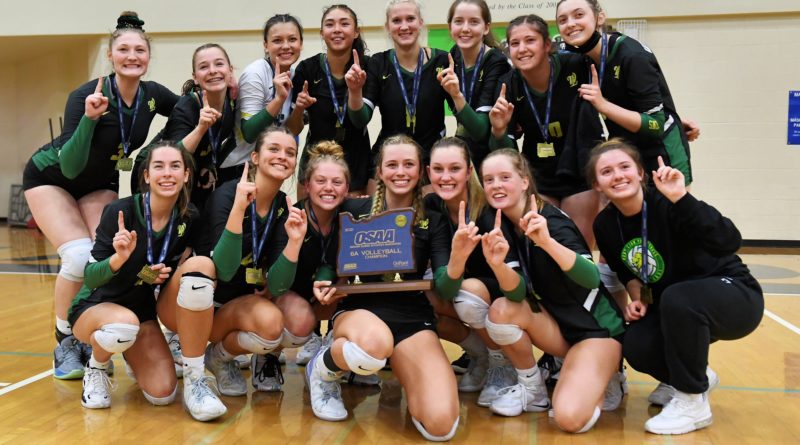 The West Linn junior couldn’t hang them around her neck as well-wishers wanted to photograph her with them.

She broke one celebrating too hard following the Lions’ three-set sweep of Jesuit in the Class 6A volleyball state championship match Saturday night at Liberty High School in Hillsboro — about the only thing to go wrong for Hoover on a night that went so right for her team.

“We just worked so hard this whole season, and now it came true. We’re just going to celebrate. We did it as a team and not as individuals. That’s something we struggled with this season, but we fought and we worked together, and that’s all that matters.”

It also mattered that West Linn (28-2) did it against the two-time defending champions, defeating the Crusaders (27-3) for the third time this season to secure the program’s first title since 2007.

“We’ve been battling with Jesuit for years now,” said Lions setter Shealyn Cecil. “We’ve always had a feud with them, and to sweep them in the state finals feels fantastic. It’s all I could ever dream of.”

Hoover came up big during the crucial stretch of the match, when the Lions completed their rally from an 11-5 deficit in the second set.

She combined with Rayna Reynolds on a block that give them their first lead of the set at 20-19, then served out the final four points, capping the comeback with an ace.

“She’s sneaky,” Cecil said. “I like to call Addie a shot master because she’s got power, but she’s smart about using it. She knows where to put the ball to get it down.”

“We have a very dynamic offense, so we knew if we relied on everyone and not just one person, it would keep them guessing,” Lions coach Emilie Wilmes said. “We made their middles work, and that was the key to our game plan.”

The Crusaders thought they’d made the necessary adjustments after their loss to the Lions in the West Linn Tournament final three weeks ago. Instead, they struggled to find a rhythm offensively, hitting just .034 as a team — including a minus-.103 in the third set.

“West Linn is a great team, and I’m really happy for them. They really came out there with their all,” said junior Izzy Patterson, who had a team-high nine kills and 11 digs. “It was mostly mental for us. We definitely made a lot of mistakes on our end. But you better believe that we’re going to come back stronger than ever. We’re going to work hard.”

Indeed, the Crusaders could return most of the core that formed this year’s runner-up, including Patterson and junior Ceanna O’Loughlin outside, sophomore Lily Lansing in the middle, and freshman setters Jackie Carle and Hayden McGehee.

“There’s some pretty good kids coming back, so we’re kind of excited about that,” said 29-year coach Teresa Zimmerlee. “And we’re excited for how they did this year. West Linn was just more experienced than we were, but I thought the kids played well. I was proud of how they played.”

The Lions graduate eight seniors off this year’s champions, including Belmont University commit Emily Warmenhoven — whose clutch play in the semifinals helped West Linn survive a five-set nailbiter with Central Catholic — Reynolds and Ella Nordquist in the middle, Cecil at setter and libero Audrey Shih.

Still, they’ll have Hoover and junior Amyah Semau back on the outside, and sophomore Olivia Doel will return to her natural setter position after moving to defensive specialist with Cecil running a 5-1 offense.

“We’ve got some good underclassmen,” Cecil said. “I have faith in the Lions. I think we’ll be good.”

West Linn opened the match on fire, quickly jumping out to an 8-4 lead and steadily expanding upon it throughout the first set before Nordquist and Warmenhoven combined on a block to close it out.

The Crusaders’ final lead of the match came at 6-5 in the third set. Cecil’s kill and Doel’s ace erased the deficit, and back-to-back kills by Warmenhoven expanded the lead to 11-8.

The lead grew to 18-13 before Jesuit made one last push, getting as close as 20-18 on an O’Loughlin kill. Warmenhoven and Nordquist combined to squelch the rally, with each getting two kills and combining on a block down the stretch. Nordquist’s tip kill on match point set off a frenzied dogpile as Jesuit’s final swipe to keep the play alive sailed wide.

“We know it takes everyone on this team,” Hoover said. “We wanted to take some pressure off Emily and not feel like she had to do it all on her own. I feel like everyone just stepped up, and we just did it as a team.”