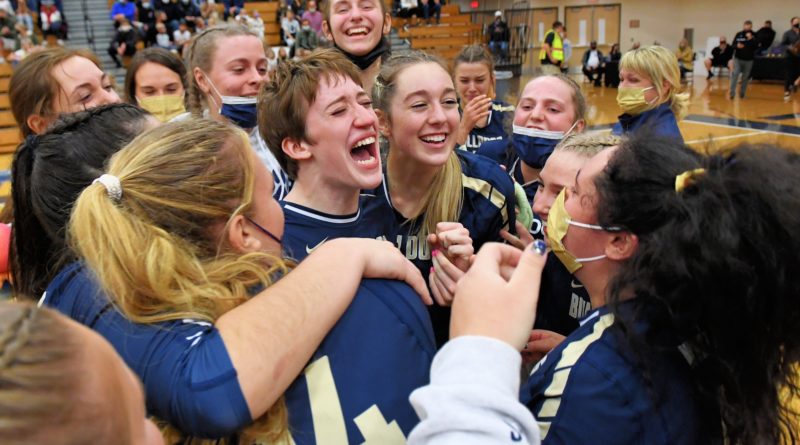 In our instant gratification world, the West Albany volleyball team had to exercise some patience before achieving its long-held goal.

The Bulldogs felt they had a championship-worthy team last season, but the COVID pandemic led to a shortened spring season with no OSAA state tournament.

They shrugged off that disappointment this fall, coming into the Class 5A playoffs with the top seed and living up to that billing Saturday night in a three-set sweep of Wilsonville, winning the championship 25-22, 25-18, 25-22 at Liberty High School in Hillsboro.

“This feels so perfectly right,” said Virginia Commonwealth-bound senior setter Sydney Harrington. “I don’t know how else to describe it. This was what we all needed. We’ve wanted this for so long. I’ve been playing with these girls since I started. I’m just overjoyed. It feels so amazing.”

Hailey Heider, who led the Bulldogs (26-3) with 16 kills, nine digs and three blocks, added how “it was really great that it was my senior year, and I got to finish it with my best friends. It just feels like we were able to finish what we started two years ago and wrap it all up for the school.”

The Wildcats (21-5), making their second consecutive appearance in the final, jumped out to a 19-13 lead in the first set, but coming out of a timeout, West Albany chipped away before Harrington served two aces during a six-point run that got it to set point. A Wilsonville service error closed the set.

“We’ve come back from worse,” Harrington said. “We played CV (Crescent Valley) and came back from 21-13 to win the set. We knew we could do it. We knew we had to. There was no other choice.”

Wilsonville grabbed a 5-1 lead to open the third set and was tied at 16-16 before three consecutive hitting errors gave the Bulldogs the lead for good. Grace Nealy closed the match with her sixth block of the match, falling backward and watching as the ball fell to the court as her teammates engulfed her.

“They’re such a great team,” said Wildcats senior Ashli Edmiston, who had a match-high 21 kills. “We started out pretty strong, but then we lost our energy a little bit toward the end. It was a lot of our mistakes that got us.”

The Wildcats lost to Ridgeview in the 2019 final and, like West Albany, felt they had a championship-caliber team last season. They entered the playoffs as the No. 7 seed despite winning a share of the NWOC title, then went on the road to knock off No. 2 North Bend in the quarterfinals and won a five-setter in Friday’s semifinals over Crescent Valley.

“It was so fun,” Edmiston said. “We were the underdogs every game, proving everyone wrong. That’s what we love to do.”

The Ravens, whose title defense ended in Friday’s semifinals against West Albany, bounced back to place third, defeating Crescent Valley in four sets.

See below for more photos from the Class 5A final.

Since Cascade made its first appearance in a state final in 2013, it had been in a slow decline, hitting rock bottom with a four-win season two years ago.

Cougars coach Cristina Williams recalled that nadir Saturday night after the biggest triumph of her 12-year career — a five-set victory over Sisters in the Class 4A state championship match at Corvallis High School for the first title in school history.

“We had to rebuild a little bit, and as freshmen, these seniors struggled. But they kept fighting, kept working, and we added some younger kids with more club experience. That helped, and the kids embraced each other. They had a goal and fought together for it.”

After dropping the third set, the Cougars (22-4) got a lift from one of those youngsters to take control of a match featuring co-Oregon West champions. Sophomore middle Annabelle Peterson had five kills and two blocks during a decisive 12-2 run that gave them the fourth set.

In the fifth, Sisters (22-4) again grabbed an early lead, but Peterson again came up big down the stretch with five kills during a match-ending 13-3 run.

“That second set, she was getting blocked, getting frustrated,” Williams said. “But she’s a very smart, very composed player, and she knows her spot. We just reminded her she can do this, and she bounced back and helped us pull through.”

Peterson finished with 17 kills and three blocks, while Lucretia Benolken led the Cougars with 18 kills and 10 digs. Jadyn Daviscourt served eight aces, and Kenna Coleman had 55 assists and nine digs.

“I’ve just got a permanent smile right now,” Williams said. “I’m still in shock right now. It was amazing. These girls are such big gamers. We kept telling them the match was not over, that there was still a lot of match left to play and to stay aggressive and don’t play fearful. And that’s what they did. They were not going to fail.”

Gracie Vohs had a match-high 19 kills and six blocks for the Outlaws, who reached the final despite losing Sacramento State commit Greta Davis midway through the season to an injury. Gracelyn Myhre added 10 kills and 10 digs, and Hannah Fendall dished out 40 assists.

Philomath, which placed fourth in the OWC and came into the playoffs as the No. 13 seed, took home the third-place trophy with a four-set victory over Valley Catholic.

No. 2 seed Burns bounced back after dropping the opening set to defeat first-time finalist Sutherlin in four sets at Corvallis High School, securing the Hilanders’ ninth OSAA state title and first since 2015.

The Hilanders also won the culminating-week tournament during the spring season.

“Sutherlin came out firing on all cylinders in the first set, and we worked to hold our own,” Burns coach Paula Toney said. “We knew we needed to be more aggressive to grab hold of the match, so we worked on coming out stronger in the second set and were able to maintain the momentum.”

Makayla Murphy led the Bulldogs with 16 kills and eight digs, and Tianna Murphy had 31 assists and nine digs.

“Two years ago, we were ecstatic to win the 4-6 match,” Sutherlin coach Kathy Rice said. “We got a taste of what it might be tonight, and you have to take a minute to remind yourself that you took second. It was a great day. I’m really happy with the effort the girls put in. I’m pretty proud of them and pleased with our showing.”

Catlin Gabel, which lost Cal-Berkley commit Sophie Scott to a torn ACL during the spring season, placed third for the program’s best finish ever, beating Creswell in five sets in the consolation final.

Top seed Salem Academy rolled to a 25-13, 25-18, 25-18 victory over first-time finalist Gaston at Ridgeview High School in Redmond. The Crusaders capped a 27-2 season with their first championship since 1995 and the third in school history. Aly Herber led the way with 14 kills, while Aubrey Smith had 12 kills and 14 digs.

Fifth-seeded North Douglas won the first state title in school history, defeating two-time defending champion St. Paul in four sets at Ridgeview High School in Redmond, winning 25-22, 18-25, 25-7, 25-17. Halli Vaughn and Asia Ward had nine kills apiece for the Warriors (27-3), in the final for the first time since 2016 and the third time ever.