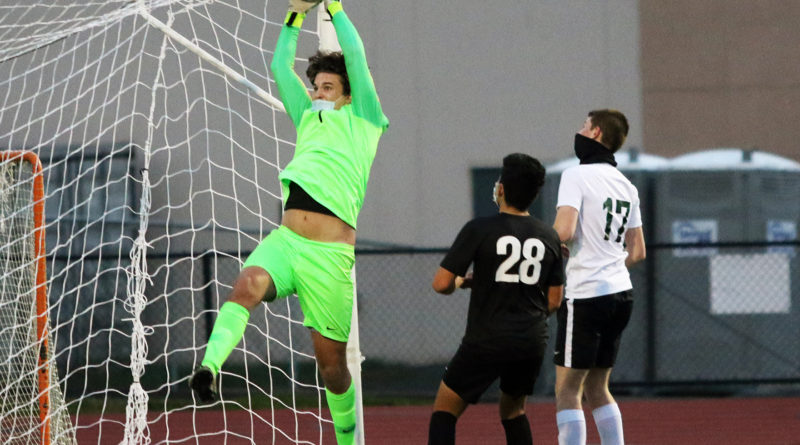 Drew Pedersen had a second-half hat trick, and Zac Simmons and Elliot Parellus combined on the shutout as second-seeded Jesuit (14-3) reached the semifinals for the fourth time in the past five postseasons with the home win at Cronin Field.

Luc Insley scored on a shot from outside the penalty area as the Crusaders broke the game open.

“The game was much closer than the score,” Jesuit coach Geoff Skipper said. “Both goalies made huge saves.”

One of those saves came on a point-blank shot in the first half by the seventh-seeded Cardinals (12-4-2), and the visitors had another shot hit the post to keep the game scoreless going to halftime.

Pedersen’s first goal came off a Lincoln mistake in the back, “and from there, the match changed entirely,” said Cardinals coach Pablo Dipascuale. “We were forced to chase the game, and props to Jesuit for hanging in there, capitalizing on our mistakes and being clinical in the final third.”

A taut quarterfinal between the third-seeded Axe and No. 6 West Linn wasn’t decided until the final round of a penalty-kick shootout, but in the end, it was the Lions (14-1-2) who advanced to the semifinals for the first time since 2013 with a 4-3 shootout win.

South Eugene (14-3) had a bicycle kick shot by Zac Walker clang off the crossbar in the second half — the closest either team came to scoring during 100 minutes of regulation and overtime.

West Linn travels to Jesuit on Tuesday night in one semifinal, while the other matches No. 1 seed Summit (15-0-1) and fifth-seeded Grant (14-2-2) in Bend.

The Storm, ranked No. 21 in the nation by United Soccer Coaches, shut out Lakeridge 3-0, and the PIL champion Generals survived 4-3 in penalty kicks against league rival Cleveland after a scoreless regulation.

Freshman Vance Sheffield pounced on a rebound midway through the second half for the game’s only goal, and top seed La Salle Prep (14-1-1) is halfway to successfully defending its state title after outlasting No. 8 Silverton (8-3-5) in a quarterfinal match in Milwaukie.

Mizael Harris served in a corner kick that Foxes keeper Brady Mykisen made the initial save on, but in a goalmouth scramble, Sheffield knocked the ball to the back of the net.

Falcons coach Monty Hawkins praised the work of junior Luke Warner, who “provided a spark on the wing with great energy, producing dangerous chances on goal.”

Silverton’s three losses were to three of the four semifinalists.

“I’d say that’s a solid season,” Foxes coach Marty Limbird said. “We executed our game plan to defend a powerhouse team in La Salle. Senior Isaac Lawson played lights-out and was dialed in all game as a defensive midfielder, as was our entire back line led by seniors Victor Lopez and Solomon Moore.”

Sophomore Ryan John scored his team-high 14th goal in the 20th minute, and defensive stalwarts Gus Lerczak and Micah Martin scored five minutes apart in the second half off set pieces to lift the third-seeded Spartans (11-3-2) to the home win.

Lerczak, a junior holding midfielder, scored his second goal of the season in the 60th minute, and Martin, a sophomore center back, scored his first career goal to help send Corvallis to a semifinal against Willamette.

“It’s been a slow progression throughout the year,” said Spartans coach Chad Foley, whose team has not lost since a 2-1 defeat to the Wolverines in late September. “We’re pretty young across the board, but I really feel like the growth I’ve seen from that game until now, I feel really good with where our team is right now. I’m looking forward to seeing how we compete Tuesday.”

Oscar Hummel made five saves for his fifth shutout of the season.

Ariel De Dios Cruz scored two goals, and Papa Yasane and Danny Sifuentes also scored for the second-seeded Wolverines (15-1), who followed their first state playoff victory in program history by ousting a Bulldogs team that had won four consecutive titles across Class 5A and 4A.

The fourth-seeded Vikings (12-1-3) advanced 5-4 in penalty kicks after a scoreless regulation to reach the semifinals for the first time in school history and eliminate 2019 runner-up Wilsonville (9-5-2).

Aston Marchington volleyed home a corner kick from Joaquin Martinez in the 95th minute, and the ninth-seeded Mustangs (12-4) ousted No. 16 Ontario in Grants Pass to reach the semifinals for the first time since 2010.

Goalie Spencer Fiske, who the night before was the placekicker for Hidden Valley’s football team in its first-round playoff loss to Banks, made six saves for his seventh shutout of the season.

The Mustangs outshot the Tigers 25-9, including 10 shots on target.

The 12th-seeded Indians (9-5-3) rallied from a 3-0 deficit after 42 minutes to force overtime, then scored twice in the first five minutes of the extra period to stun Skyline Conference champion Henley in Klamath Falls.

Nico Algoso Del Agua scored off a corner from Martin Ruiz a couple minutes into overtime, and Ruiz capped the rally with a goal in the 95th minute.

Molalla is in the semifinals for the first time since 2016 and will travel to Hidden Valley on Tuesday.

The Hornets (12-4-1) played the final 86 minutes a man down after losing their starting keeper to a red card for denying an obvious goal-scoring opportunity. Still, the hosts looked as if they’d survive and advance until Molalla began its comeback.

Tony Morfin started the rally with a goal in the 45th minute off a wall pass from Ruiz. Two minutes later, Algoso Del Agua drew Molalla closer, and Blake Griffin tied the score in the 52nd minute.

Caedyn Laninga saved two consecutive penalties in a shootout to clinch North Marion’s 4-3 shootout win after the sixth-seeded Huskies (11-2-3) and No. 3 Phoenix played to a scoreless draw in regulation.

“They made it very difficult for Victor to possess and distribute the ball to his fellow strikers,” Perez said. “They pressed him very well and made it a physical battle with him. They gave him little time to think.”

Mark Grimmer’s 77th-minute goal lifted second-seeded Philomath (15-1) to the semifinals for the first time since 2013. The Warriors will play host to North Marion on Tuesday.

Senior Aidan Sheeran-Hahnal recorded a brace, and Felipe Rueda Duran had a goal and an assist to lift two-time defending champion and top seed Catlin Gabel (15-0) past Delphian (12-4-2) in Southwest Portland.

Adrian Long and Evan Williams also scored for the Eagles, who allowed just one shot on goal in recording their ninth shutout of the season.

“Delphian fought hard throughout, with a standout performance from their keeper, Brody Workman,” Shulman said.

The fifth-seeded Aardvarks (12-4) erased an early deficit to get past the fourth-seeded Bruins (13-2) and earn a third shot at archrival Catlin Gabel in Tuesday’s semifinals.

The Eagles won the first two matchups between the Southwest Portland private schools by 4-0 and 3-1 scores. The two also met in the past two state finals, both won by Catlin Gabel.

“It was a very wet and sloppy game, and Oregon Episcopal was just better than us today,” said Bruins coach Jess Beaman.

Senior Pablo Claustro recorded a hat trick, with two of his goals assisted by Diego Magaña, and the third-seeded Pirates (15-1) of Boardman cruised to the quarterfinal home win over the No. 6 Billies (16-1).

Jose Napoles scored Riverside’s other goal off an assist by Adair Rodriguez, and Will Killion made four saves.

Oswaldo Rosas scored the tying goal for Dayton in the 24th minute, and senior Aidan Olberding’s 42nd-minute tally lifted the seventh-seeded Pirates (13-3) to the win over No. 2 Riverdale (9-2) at Lewis & Clark College.

Dayton erased a sixth-minute goal by the Mavericks to reach the semifinals for the first time since 2011. The Pirates will travel to No. 3 Riverside on Tuesday.