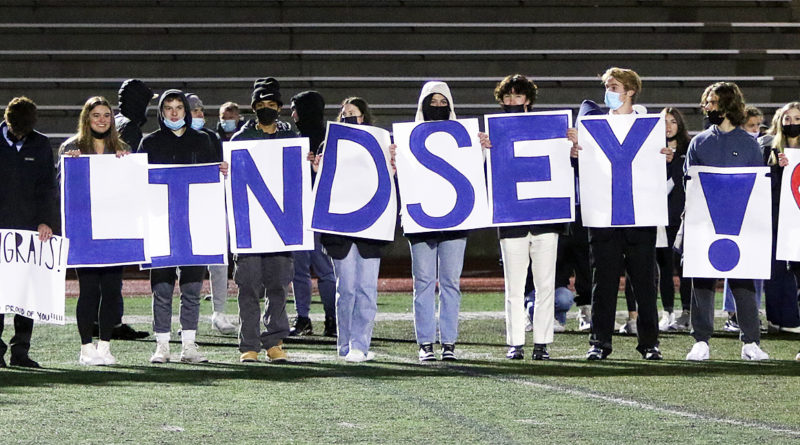 It was a special night for the Wilsonville girls soccer team.

It was a very, very special night, and a historic night, for Wildcats senior forward Lindsey Antonson.

And, because of Antonson’s record-setting performance, along with an impressive outing by her teammates, the Wilsonville squad gets a chance to enjoy at least one more special night.

Antonson’s third goal of the match, which came with 30 minutes and 13 seconds left in the second half, gave her 46 goals for the season (including eight in two playoff matches) and 134 for her career at Wilsonville. That put Antonson on top of the list of Oregon goal-scorers, passing Jesuit’s Callan Harrington, who was the career goal-scoring leader with 133. Antonson entered the contest tied for the No. 2 spot on the list with Hillsboro’s Tiffeny Milbrett and Sarah Bagby, who started her career at Catlin Gabel and finished at Jesuit.

“Just to be in that conversation in the first place is just beyond words. Honestly, it leaves me speechless, but it’s a blessing,” Antonson said during the post-match celebration. “My team, obviously, had a lot to do with it. And also passion and determination, because I love the sport, and that’s what I do.”

“Lindsey is like my idol,” said Wilsonville sophomore forward Kenley Whittaker, who had the assist on Antonson’s record-setting goal. “And she’s a really dear friend to me, so it was really, really special to assist on her goal. I wanted to help push her over the record. It was really special.”

Also special for the Wildcats was the impressive victory. With the win, Wilsonville, the Northwest Oregon Conference champion and the No. 1 team in the final OSAA power rankings, improved to 16-0-1. The Wildcats, who have played in three state championship contests but have yet to win a title, advance to the semifinal round of the Class 5A playoffs. They’ll play host to Crescent Valley on Tuesday, with the winner moving on to play in the Nov. 13 state title tilt.

“I’m really excited. We’ve been working for the championship,” Antonson said. “We want to get it and bring it back home to Wilsonville. Girls soccer hasn’t done that, so we’re really looking forward to it.”

“This is a really big win for us. We really wanted to beat Putnam, and it also advances us to the semifinals, which is pretty exciting,” Whittaker said. “We’re looking to win and advance. We’re heading for that title. That’s our overall team goal.”

It didn’t take the Wildcats long to show how determined they are during Saturday’s quarterfinal contest.

Senior Brighton Ring scored from 20 yards, off a pass from sophomore Brianna Crane, giving the home team a 1-0 lead just 1:55 into the contest. Then, Antonson scored her first goal of the night, coming on an open shot 15 yards away on a breakaway opportunity, putting the ball into the left side of the Putnam goal with 32:03 left in the first half.

Less than a minute later, Ring scored again, this time on a follow-up shot after Putnam sophomore goalkeeper Hailey Patlan made a diving block on an attempt by Antonson. Ring’s second goal upped the lead to 3-0 with 31:08 remaining in the first half.

Whittaker then got into the scoring act. Whittaker, going up high, got her head on a long-range free-kick pass from senior Karina Borgen, knocking the ball into the Putnam goal to push the score to 4-0 with 12:56 before halftime.

“That was special, too,” Whittaker said with a smile. “That was a free kick from Karina Borgen, and she just placed it perfectly where I needed it. It was just a jump and a header over the keeper, who popped out too far.”

Antonson would score again, blasting in a shot from 25 yards, coming on a play that started with a corner kick by senior Dalton Mermis, making the score 5-0 with 7:02 left in the first half.

That goal put Antonson in a tie for the top spot on the all-time goal-scoring list. She looked to have three other record-setting scoring opportunities in the first half, but all of those attempts were blocked by a diving Patlan.

“It was frustrating, but I was trying not to let it get to my head,” Antonson said. “I’m just glad I got it over with in the second half, pretty early.”

The record-setting goal came 9:47 into the second half. Whittaker, with the ball near the baseline on the left side of the field, had one thought in mind — get the ball to Antonson.

“I absolutely was looking for Lindsey,” Whittaker said. “I said, ‘Lindsey, this is your ball.’”

Whittaker’s pass found Antonson, with a group of Putnam defenders around her, 15 yards out in front of the Kingsmen goal. From there, Antonson hit a sliding shot, smacking the ball into the left side of the goal for the record-setting tally — igniting a loud ovation from the Wilsonville crowd.

“I knew right when I hit it that it was going in,” Antonson said. “I was just kind of speechless, and it was a weight off my shoulders. It was like, ‘I don’t have to worry about it anymore.’ Kenley got me the ball, which means a lot, because her and Bri (Crane) get me a ton of balls. Just having her give it to me was really special, too, but getting it over with, because it’s been getting closer and closer, just felt nice.”

“It was really emotional. I yelled, ‘Yes, Lindsey!’” Whittaker said. “I was dreaming about that. I was telling Lindsey it would be my dream if I could assist her on that goal. It was really sweet. I definitely take pride in that.”

Wilsonville closed out the 6-0 win, earning a trip to the semifinals.

“I’m really proud of the team,” Antonson said. “We came out hard. And we’ve played this team before in league, and playing a team two times is really difficult. I’m really proud that we came out here and worked hard and got the job done.”

“Tonight was very, very fun,” Whittaker said. “I enjoyed every single second of that game.”

Wilsonville had 20 shots on goal and four corner kicks. The Wildcats defense, including junior Cassandra Wedin, senior Katelyn McDougal, Mermis and Borgen, among others, limited Putnam to two shots on goal.

Senior Emma Gingrich and sophomore Ariana Barney had Putnam’s shots on goal. Patlan had a strong game in goal, with 14 saves, including one on a penalty kick.

Putnam, the No. 3 team out of the Northwest Oregon Conference and the No. 8 team in the OSAA power rankings, finished its season 8-4-2.