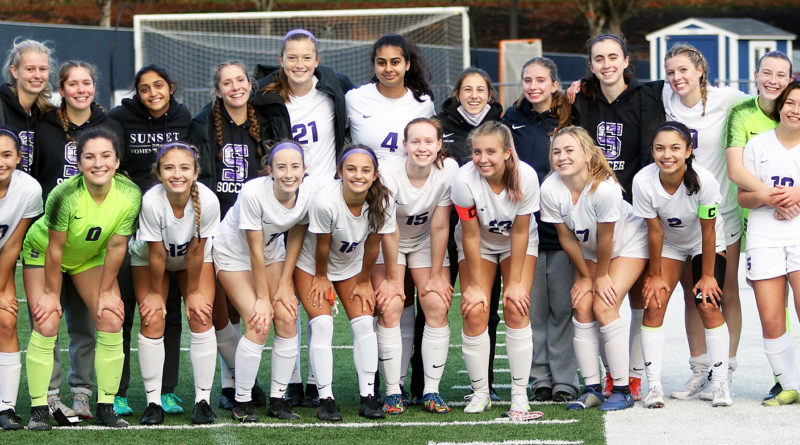 Siera Edwards stepped up in the clutch.

Ellie Felt came through under pressure.

Heck, the whole Sunset girls soccer team seemed to shine in the moment.

The Apollos, with Edwards, a senior goalkeeper, making two saves in a penalty-kick shootout, and with Felt, a sophomore midfielder, scoring the game-clinching goal in the shootout, rallied to get a dramatic 2-1 (4-2 in penalty kicks) win over Lake Oswego in a Class 6A state playoff quarterfinal match Saturday at Lake Oswego High School.

“Oh, it means so much,” Edwards said following the Sunset victory celebration. “I genuinely love this team so much, ever since I’ve been on it since my freshman year. Everyone on it is so kind and supporting, so it means so much to be able to get to this point and do it as a team.”

“Oh, this is so big,” Felt said. “This is my first year, without the COVID year, and my freshman year, and it’s so amazing to be part of a team that’s so supporting and just wants the best for everyone.”

With the win, Sunset, the No. 2 team out of the Metro League and the No. 7 team in the final OSAA power rankings, improved to 12-4-1. The Apollos also advance to play in the semifinal round of the state playoffs, where they’ll face Grant on Tuesday at 5:30 p.m. at Delta Park’s Strasser Field.

“I don’t think we’ve been in the semifinals since I’ve been here,” Edwards said. “We’re excited. Our last game against them (Grant) was a little rough (a 5-0 road loss Sept. 9), but we’re a whole new team. I’m so excited.”

“Oh, I think we’re going to have so much fun,” Felt said. “Being out here with the team is so amazing.”

Lake Oswego, the Three Rivers League champion and the No. 2 team in the power rankings, finished its season 14-1-2.

Sunset had to come from behind to get the win in Saturday’s match, as the Lakers held a 1-0 halftime lead.

The Apollos got their opportunity to tie things up when Lake Oswego was whistled for a handball in the penalty box with 21 minutes and 5 seconds remaining in the second half. Sunset took advantage of that opportunity, as senior Malea Cesar put her ensuing penalty kick into the left side of the Lake Oswego goal, tying the score at 1-1.

Neither team was able to score again in regulation play, with Lake Oswego senior goalkeeper Lauren Smith making a diving save of an open Sunset shot with just over two minutes remaining. There was also no scoring in the two 10-minute overtime sessions, sending the contest to a penalty-kick shootout.

That’s where Edwards really shined for the Apollos, diving out to her left twice to make blocks of two of the Lakers’ four attempts.

“I just try to see whichever way I think they’re going, and then I, personally, like to take a step the opposite way to enforce that, and then I just go and do my best,” Edwards said. “It felt amazing.”

For Sunset, Cesar, junior Megan Szudarski and senior Parisa Burke were successful with their attempts, giving the Apollos a 3-2 lead in the shootout and bringing up Felt with a chance to clinch the win.

Felt put her shot in the left side of the goal, giving Sunset the victory and igniting the Apollos’ celebration.

“I was nervous stepping up, but I just knew I needed to put this away, for my team, and for Siera, for her two blocks,” Felt said. “I just get in my head and told myself, ‘I can do this,’ and putting it away was so amazing. Oh my gosh, I ran straight over to Siera, because she was the one who really did it for us.”