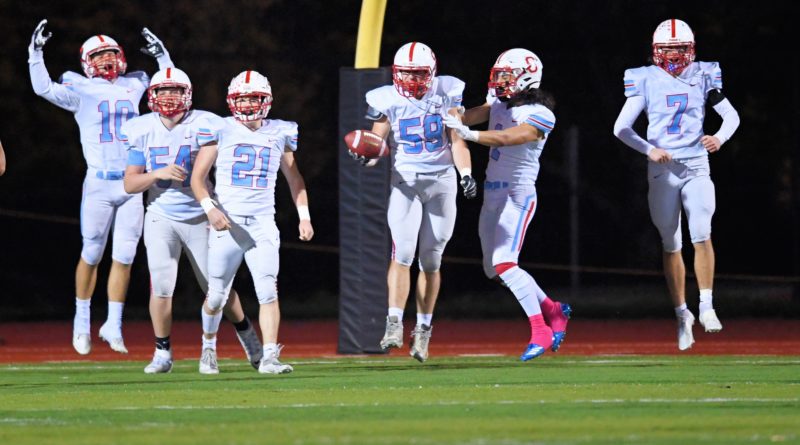 Host David Douglas hadn’t qualified for the Class 6A state playoffs since 2014, while South Salem was making its first appearance in the past four seasons — and at times, the moment appeared too much for both to handle.

The Saxons settled their nerves enough to make the necessary plays to earn their first playoff victory in the past six years, outlasting the Scots 40-27 to earn a second-round matchup at No. 2 West Linn next week.

“We didn’t play to our standard tonight, but we’re ready for West Linn,” said junior quarterback Daschel Smith, who ran for three touchdowns and threw for two, finishing with 276 yards of total offense.

“A lot of people didn’t believe in us, but we came into the season thinking league (title). We didn’t get that, but we still got to the playoffs, and we’re excited to be here.”

South Salem (6-4) clinched its first winning season since 2015, and after three consecutive two-win seasons, the electricity flowed through the postgame huddle.

“I’ve never been on a winning team before, so that’s pretty awesome,” said junior lineman Trevor Goldman. “I’m super excited for next week. I know I’m going to show up and do what I can do, and hopefully my teammates do the same. That’s all we can do.”

Goldman scooped up a fumble at the Scots 15-yard line and scored his first career touchdown at any level late in the first quarter to put the Saxons up 14-7.

For every big play the Saxons made, though, they couldn’t shake the Scots (5-5), who were hosting their first playoff game in the past 11 years and seeking their first postseason win since shocking West Linn in a 1-8 first-round matchup under the OSAA’s prior playoff format in 2011.

Jayden Poulshock capped the ensuing Scots drive with a 7-yard run to draw them within 14-13. After Smith’s 48-yard keeper pushed the lead up to eight, the Scots answered with a quick strike of their own — a 73-yard pass from Jakai Clardy to Poulshock up the seam that tied the score at 21-21.

Smith then hooked up with his favorite target, junior Tini Tinitali III, for touchdown passes of 34 and 8 yards just before halftime to give South Salem a 34-21 lead. The second score was set up by Isaac Harrell’s punt block and recovery at the Scots 8.

Still, the Scots came out of the locker room and cut into the deficit yet again, with Poulshock finishing a 12-play drive by zigging and zagging through traffic and bouncing off several would-be tacklers for a 25-yard touchdown with 5:04 left in the third quarter.

South Salem responded with its best drive of the night, going 60 yards in eight plays, with Smith scoring on a 12-yard run to push the lead back to 13 going to the final quarter.

Finally, an interception by Parker Williams deep in Saxons territory with 1:50 to play allowed them to breathe easier.

“Our kids came out and made enough plays to win,” said 21-year coach Scott Dufault. “I’m proud of our kids. They competed and made the stops when we had to. We certainly didn’t play very well, but we came out of here with a win and get to play next week.”

While South Salem celebrated ending its six-year playoff drought in the north end zone, the Scots somberly walked off the field, not yet ready to let the magnitude of what they’d accomplished this fall sink in.

“Yeah, it might take a while,” said Poulshock, a senior who ran for a game-high 142 yards in his final game. “This is my first time being to the playoffs ever. I’m just really proud of my team and everybody pushing themselves to the hardest, being in the weight room every day and coming out here and doing the work on the field.”

David Douglas was one of the last teams in the spring to take the field, initially opting to play 7-on-7 until Multnomah County emerged from the high-risk category during the height of the COVID pandemic.

They played just two games during the spring season, but after a solid offseason, coach Cal Szueber had playoff expectations for his team — until he learned a week before the season that senior James Hubbard, his projected starter at quarterback, was transferring to Centennial, while his top receiver was headed to McDaniel.

That thrust freshman Jakai Clardy into the breach at quarterback, so for the Scots to not only make the playoffs but earn a home game as the No. 15 seed exceeded even Szueber’s lofty expectations.

“As we were telling the seniors, the legacy they leave behind, we got better and better every year, and I’m so proud of these guys for what they’ve done,” Szueber said. “We made mistakes tonight, but that doesn’t define our season. It was a great season, and we’re looking forward to our future, too.”

Szueber, who has led teams at six schools to 11 playoff appearances during his 25-year coaching career, called this year’s group “probably the youngest team I’ve ever coached.” With Dufault’s squad also fairly young, that led to what both coaches lamented were lots of mistakes, including a combined 25 accepted penalties for 257 yards.

“We were here and got a taste for it,” Szueber said. “Now, I hope the kids, they’ll want to keep coming back.”

The Saxons, meanwhile, get to come back for another week, and they’re well aware of the challenge facing them. The Lions (9-1), tri-champions of the Three Rivers League, eased past Bend 35-13 in their first-round game.

“They’re a hell of a team, one of the best in the state, so it’ll be a really good challenge for us,” Smith said. “There’s a lot of sophomores and juniors on this team, and we were kind of freaking out to start the game. This was not a place any of us had been on this team, so we just had to slow down and get used to it and raise the standard.”