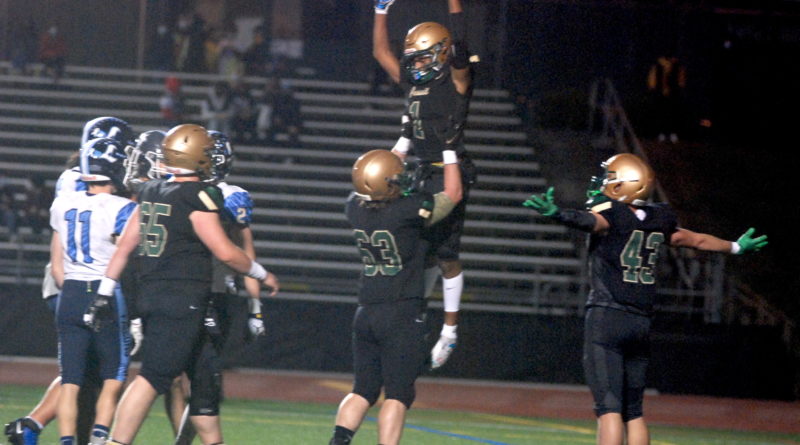 PORTLAND — For years, it’s been no secret how Jesuit has built its powerhouse program in Oregon.

A strong, gritty running game behind a big offensive line dubbed “The Franchise” has carried the Crusaders to a winning tradition every fall.

Well, a big warning just flashed to future opponents after Jesuit showcased a potent passing attack led by quarterback Jacob Hutchinson. The sophomore was sensational, passing for 226 yards and three touchdowns in less than a half to fuel the Crusaders’ 62-6 rout of Liberty in the first round of the OSAA Class 6A state playoffs Friday night at Jesuit High School.

Hutchinson gave all credit to his offensive line, which he said has not allowed a sack all season.

“You see those boys over there, that’s The Franchise,” Hutchinson said. “They’re the leaders of our team; they keep me healthy and safe. I haven’t been sacked once this year, and that’s all to them. They’re opening up holes for our running backs. When you’ve got big boys on our offensive line, it opens it up for the passes and all that stuff.”

The three touchdown passes came on three consecutive drives in the first half — each going to fellow sophomore Jace Burton on catches of seven, 51 and 79 yards that left Liberty reeling.

“It felt really good,” said Burton, who finished with seven receptions for 181 yards. “I have to owe it to Jacob. I mean, the balls he threw me were amazing. Got to give it to Coach (Ken) Potter and Coach (John) Andreas for the play calls. They put me in good situations to score and you just gotta make it happen.”

Their chemistry on the field was no surprise after Burton said they started playing flag football together at four years old and continued all the way through fifth grade. Since then, they lived in different school districts before reuniting to play at Jesuit last year as freshmen.

“I’ve known him going on 12 years,” Burton said. “It’s just been going great. He’s been my best friend forever. As of last year, we’re going to school together, so it’s great. I think already having that relationship just made it so much better. He’s my best friend, he’s my brother, and he’s my quarterback, too.”

The threat of a legitimate passing attack gives an element that now makes Jesuit even more difficult to defend. Since a season-opening loss to West Linn, the Crusaders have won nine games in a row and are averaging 39.3 points per game in those victories.

“It just adds to our offense,” Burton said. “Everybody’s a key factor to this offense, so I think adding a passing game makes it even better. There’s no more loading the box with having Jacob’s arm and having a line.”

Jesuit’s rushing game was on full display once again as three running backs combined to score six touchdowns. Senior Michael Rincon led the way, totaling 12 carries for 144 yards and two scores as part of a 35-point second quarter that gave Jesuit a 49-0 lead at halftime.

Sophomore Lonnie Burt added two touchdowns from three and nine yards in the first half. Sophomore Julius Christensen had two scores in the second half (36 and 48 yards) and finished with 10 carries for 114 yards as the mercy rule was enforced to activate a running clock.

“Liberty really loaded the box with seven, eight guys and we were able to take advantage of that with a couple long passes,” Potter said. “Then they took a lineman out and then our running game was a little better. It’s one of those things where you hope it works like that, but you’re never quite sure it’s going to. The kids executed really well.”

Liberty had opportunities to make it a game early and got deep into Jesuit territory a couple times in the first half. The Falcons reached Jesuit’s 23-yard line late in the first quarter and the Crusaders’ 9-yard line early in the second quarter, but both drives stalled as Liberty turned it over on downs.

“We just couldn’t finish it,” Falcons coach Eric Mahlum said. “I think sometimes the difference in a game like this is, you finish those drives, you start to go toe to toe with them and put some points on the board. It pumps up your defense a little bit, your offense is feeling good. When you don’t get those, the other side is feeling a little bigger, your guys start to question what they’re doing, and I think it was tough to not punch those in.”

Senior quarterback Hiro Diamond led Liberty with 24 carries for 151 yards and a touchdown. He completed 7 of 16 attempts for 47 yards and an interception. Diamond’s score came on a 3-yard run late in the fourth quarter.

Mahlum credited Liberty’s senior class led by Diamond, Cade Hammond and Ethan Jones for helping the program continue to build a solid foundation that includes a second-round appearance in 2019 and a quarterfinal appearance in 2018.

Metro League champion Jesuit (9-1) now travels to face Clackamas (10-1) in the second round next Friday. The Cavaliers are coming off a 31-18 win over Sunset in the first round.

As the No. 9 seed in the OSAA bracket, the Crusaders feel confident about their chances against anyone.

“I think we’re right where we need to be,” Hutchinson said. “I honestly do. We’re going to make a run at the championship. We got into the playoffs, that was our goal. We don’t really look at our seeding. We’ll play whoever lines up against us.”

Added Burton: “I think every team has overlooked us at this point. Ninth seed, we lost Week 1, so you know, I think it’s nice being underdogs.”

Potter said the talk of rankings and who the favorites are doesn’t affect what they do.

“We just need to focus on us,” said Potter, who last week moved into second place on the state’s all-time coaching wins list (now at 334). “And if we focus on us and we practice well and do things right, I think we’re a formidable opponent to anybody.”