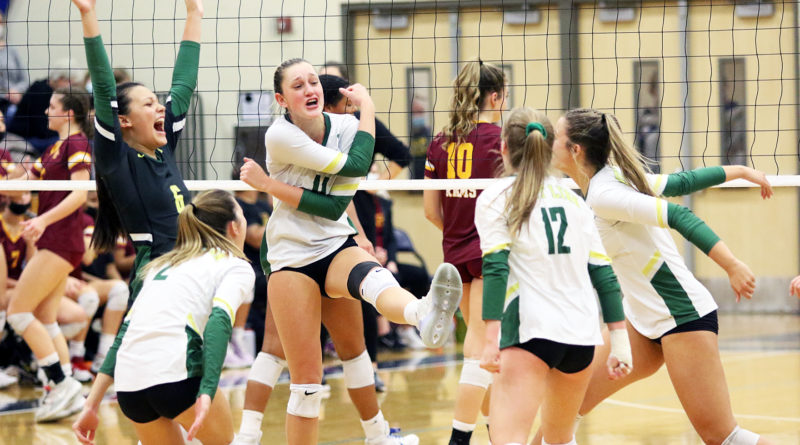 Every single hit, pass, serve, dig — they all mattered, too.

Wow, did they ever.

It was the West Linn volleyball team that scored the final so-important point. With that crucial point, coming on a kill by senior outside hitter Emily Warmenhoven off a set by senior Shealyn Cecil, the Lions got a thrilling victory — and, with it, a chance to claim a state championship.

“This was really fun — well, now it’s fun. In the moment it was a little too stressful,” Cecil said with a smile after the match. “Oh, we’ve been gunning for a championship for a very long time. Us seniors have been working for it since our freshman year. We’re just one step closer to it now. That’s really important to us.”

“This is huge for us,” Warmenhoven said. “This has been a goal of ours all season, to make it to the top two.”

West Linn, the Three Rivers League champion and the No. 1 team in the final OSAA power rankings, improved to 27-2. The Lions advance to play in Saturday’s Class 6A state championship match, where they’ll have the chance to win their first state title since 2007 when they play Jesuit at 7 p.m. at Liberty.

“We’re super stoked for tomorrow,” Warmenhoven said. “We have to give it our all and play as a team the entire time. For us seniors, it’s our last time playing for this high school. We’re just going to put it all on the floor.”

Central Catholic, the Mt. Hood Conference champion and the No. 4 team in the OSAA power rankings, moved to 24-3.

“Oh my gosh, I would take that kind of game over a blowout every time,” Central Catholic junior setter/outside hitter Mia Starr said. “I love playing games like this. It was just a fun, fun experience.”

West Linn, with its sights set on earning a spot in the championship match, came out strong to start the semifinal contest. Behind two kills by Warmenhoven and an ace by Cecil, the Lions sprinted to a 5-0 lead in the opening set. The score was 15-3 following a block by West Linn junior Addie Hoover.

Central Catholic cut the lead to 21-18 on a tip by Starr. But West Linn was able to fight off the rally, getting a back-row kill by Hoover, coming off a set by Cecil, to close out a 25-21 first-set win.

“We weren’t expecting to come out that strong right away,” Cecil said. “And I think that showed, because they caught up to us, and we almost blew that 10, or so, point lead that we had. But, we recovered, and it worked out well for us in the end.”

The second set was close in the early going. The Rams took a 14-13 lead on a kill by junior Sofia Cooper. But after a sideout kill by Hoover, West Linn got a point on a serve by senior Ella Nordquist, followed by a block by senior Rayna Reynolds, and the Lions took control of the set.

With senior Lila Skates serving, West Linn scored three consecutive points to go up 24-17. From there, a kill by Warmenhoven, off a Cecil set, closed the Lions’ 25-18 second-set victory, leaving West Linn just one set from earning a spot in the title tilt.

But Central Catholic wasn’t about to let West Linn get there easily.

“We were down the first two sets. That can take a lot out of the body and the mind, but we pulled through and looked at each other and said, ‘We’re not going to lose this game. We’re going to work hard for every point,’” Starr said. “We really came together as a family, and we’re like, we have each other, and we’ve got this.”

That determination paid off for the Rams in the third set.

With the score tied 10-10, after Central Catholic got a sideout kill by junior Alycia Wilson, the Rams took charge. An ace by senior Renee Tassin and another kill by Wilson helped the Rams take a 13-10 lead. Two more aces, both by freshman Mia Hunt, gave Central Catholic a 17-12 advantage.

West Linn rallied, taking an 18-17 lead on a kill by Nordquist. But the Rams wouldn’t be denied.

Two kills by senior Elliott Bush, a kill by Cooper and a point on a serve by Tassin helped the Rams get a 25-22 third-set win.

“We took it one point at a time,” Starr said. “We had that mindset. They might be bigger than us, but they’re not as tough as us.”

Central Catholic kept with that strategy in the fourth set. The Rams took a 10-9 lead on an ace by Hunt, and they didn’t give it up the rest of the set. Aces by Tassin and Bush, and strong play at the net by Cooper, Starr, senior Lauren Stempie and Wilson, helped Central Catholic win the set 25-15, setting up a decisive fifth set.

“Serving was a big deal. We served a lot tougher. We were reading things more, and we stayed more disciplined. We stayed calm. We took deep breaths together as a team. That really helped all of us,” Starr said. “The cheering was a big part. The student section, obviously, really helped, but it started on the court. We looked at each other after every point.”

Going to the fifth set, played to 15 points, Central Catholic seemed to have all the momentum on its side. Now, it was West Linn’s turn to try to respond.

“We just had to recollect,” Warmenhoven said. “They were obviously giving it their all. We knew we had to come back and play as a team to pull it off.”

“It’s really hard to do, coming off two lost sets,” Cecil said. “We were thinking, ‘Balls to the walls, give it everything we’ve got, because this is going to make or break us. We’ve got to do it now.’”

West Linn, soon after getting back-to-back kills by junior Amyah Semau, took a 10-9 lead in the back-and-forth fifth set when Reynolds scored on a tip off a set by Cecil. Central Catholic answered, tying the score 10-10 on a kill by freshman Malia Parker.

Warmenhoven took over from there. Her consecutive kills gave the Lions a 12-10 lead. Then, following a block by Cooper, Warmenhoven had two more kills, giving West Linn a 14-11 lead, leaving the Lions one point from victory.

The dramatics weren’t over. Back-to-back hitting errors by West Linn closed the gap to 14-13. But on the next point, Cecil set Warmenhoven, who smashed the ball to the hardwood on Central Catholic’s side of the net, wrapping up the 15-13 fifth-set win and igniting West Linn’s victory celebration.

“It was relief, mostly. I was proud of my team,” Cecil said of her emotions at the end of the match. “Honestly, it was just working together, staying together. In the sets that we lost, it was more that we weren’t playing as much as a team. We knew we had to count on each other. My hitters, Emily Warmenhoven and all of them, did great. I know I can always depend on her.”

“It was very exciting,” Warmenhoven said of the fifth-set victory. “We had to play as a team, support each other and give it everything we could to get to where are now. This was very fun — definitely one of the better ones this season for us.”

While the outcome wasn’t what they wanted, the Rams say they’ll also take good feelings from the semifinal battle.

“That was so intense. My freshman year, I was a player on the bench watching a fifth set. So, coming from that to being out there playing is very different,” Starr said. “It was definitely exciting, especially with a good team like West Linn. It was back and forth, back and forth.”

Central Catholic will face Bend in the Class 6A third-place match, which will be played Saturday at 12:30 p.m. at Liberty.

“Next day, new game,” Starr said with a smile.