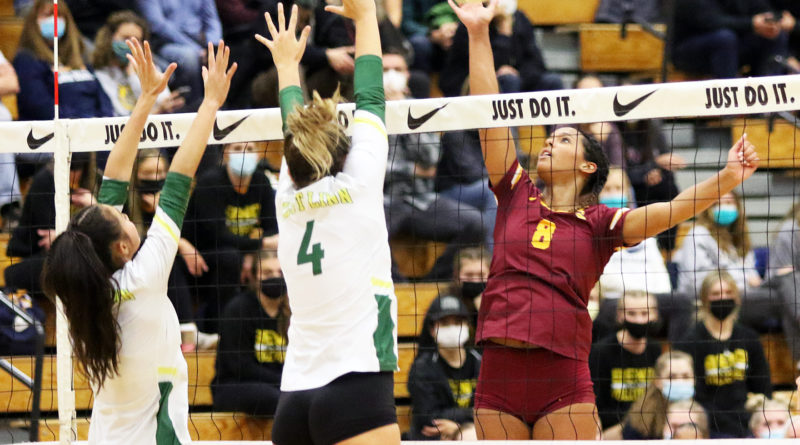 The third-seeded Crusaders, who got the match-winning point on a kill by junior Isabel Patterson, improved to 26-2. Jesuit will face West Linn in Saturday’s Class 6A state championship match, set to start at 7 p.m. at Liberty High School in Hillsboro.

Bend, the No. 2 seed, moved to 23-3. The Lava Bears will play Central Catholic in the Class 6A third-place match, which will be played Saturday at 12:30 p.m. at Liberty.

“We are so excited for this opportunity,” Bulldogs coach Megan Wallace said. “Not having the opportunity last year has really fueled our eight returning seniors as well as the rest of the team. This has been our goal since the beginning of the season, and we made it part of our culture.”

“Crescent Valley is very well-coached and had a great game plan for us,” Wilsonville coach Scott Thompson said. “We’d been winning the serve/serve-receive battle during the second half of the season, but they won it today. Our team showed incredible resiliency as we were playing from behind all match. We won key points along the way and in the fifth set, we played with poise and confidence while remaining aggressive. Very gritty effort by our team. I couldn’t be more proud of our team today.”

Thompson said Ashli Edmiston and Makenna Wiepert stepped up for the Wildcats in the victory. Ella Hubka was key in the first-set win, serving points 19-23. Libero Sophia Kleckner also had a strong performance.

“She had an incredibly gutty performance and made some key defensive plays down the stretch,” Thompson said. “I also have to mention my two middle blockers, Tatum Lubisich and Emma Alewine.  They do all the dirty work necessary for us to win. They get double team blocked all match and keep swinging.  They’ve been unsung heroes all season.”

The Wildcats improved to 21-4. Wilsonville will play West Albany in the Class 5A state championship match Saturday at 4 p.m. at Liberty.

“The team played very well for their first appearance in a semifinal match,” Crescent Valley coach Troy Shorey said. “They showed a lot of spirit and passion while playing. All sets were hard-fought and the players gave their all on every play.”

Madison Heagney had eight aces, seven kills, 24 assists and 15 digs for the Raiders. Bella Jacobson had six aces, recorded 17 kills, passed 2.82, had one stuff block and tallied 16 digs. Taelyn Bentley had 10 kills and three stuff blocs. Kara Peterson had one ace and 21 digs, and Kamdem Mitchell had two aces, 13 kills, 26 assists and 11 digs.

The top two seeds will meet in the Class 4A state championship match, which will be played Saturday at 7 p.m. at Corvallis High School.

No. 2 seed Cascade swept two-time defending champion Valley Catholic in three sets to earn its spot in the championship match.

Sisters and Cascade have met twice this season, with each team winning at home.

The second-seeded Cougars (21-4) got what coach Cristina Williams called “a team effort tonight for sure” to dethrone the two-time defending champion Valiants, sweeping the match 25-19, 25-21, 25-23.

“My middles really stepped up,” Williams said of senior Emma Gates and sophomore Annabelle Peterson, while junior Lucretia Benolken “was our outside powerhouse who led our team in kills.”

Cascade trailed 21-14 in the third set but went on a 7-0 run to get back into it, eventually closing out the match.

“I am incredibly proud of how my team came together and showed fight in the third set,” Williams said. “We won with our tough serves that helped us fight all the way back.”

“We are so excited to be in the finals,” Sutherlin coach Kathy Rice said. “This group of ladies have worked incredibly hard all season. They have worked to trust each other to pick up the slack when a teammate stumbles. It took all of them to get here and will take all of them tomorrow.”

Tianna Murphy had 45 assists and Haley Smoldt added 20 digs for Sutherlin, which will face No. 2 Burns in Saturday afternoon’s championship match. The Hilanders (28-3) ousted Catlin Gabel in four sets.

First-time finalist Gaston will take on Salem Academy, which last played for a state title 12 years ago, in the Class 2A final at Ridgeview High School in Redmond. The Greyhounds outlasted Monroe in five sets, and the top-seeded Crusaders, who last won a title in 1995, swept Grant Union.

At Ridgeview High School in Redmond, No. 5 seed North Douglas, reaching the final for the first time since 2016 and in search of the program’s first state title, will meet two-time defending champion St. Paul in Saturday’s final. The Buckaroos (30-4) rallied from a 2-1 deficit to defeat Damascus Christian.