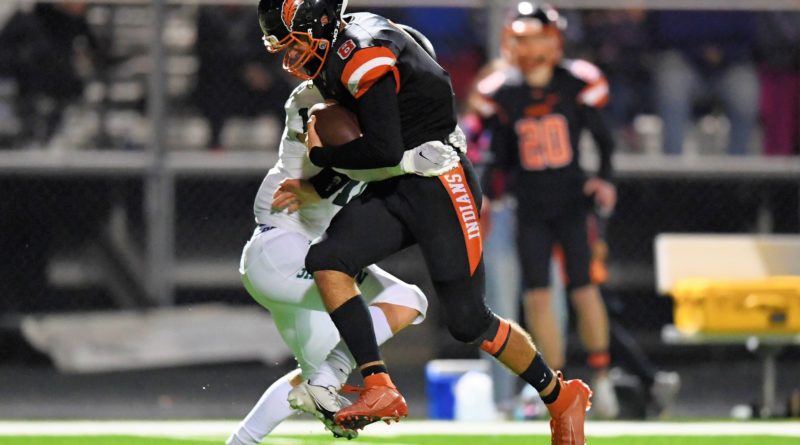 Logan Klopfenstein caught three touchdown passes — all in the first half — and Roseburg (9-1) turned back a second-half comeback bid by the Tigers (3-7) for the victory at Finlay Field in Roseburg.

The victory was Roseburg’s first in an OSAA playoff since 2013 and its first home playoff win since 2011.

The Tigers came out of the locker room with fight, though, scoring touchdowns on their first two possessions of the second half and putting the outcome back in doubt.

With its 35-3 advantage now shaved to 35-17, Roseburg re-established control on its next possession. The key play on the drive came when Marsters, the quarterback, rolled out and burst down the left sideline for a 40-yard-plus run deep into Tigers territory. That led to Roseburg’s final touchdown, a 17-yard run by Cayden Eckel on the first play of the fourth quarter, and a 42-17 score.

Klopfenstein’s first touchdown catch came on a fake field goal, when he took a toss from holder Dominic Tatone for a 13-yard score. Klopfenstein’s next two touchdowns came on passes from Marsters, those plays covering three and 69 yards.

On the first snap after Roseburg made the score 21-3 on Klopfenstein’s third scoring catch, Dunn made an interception that led to Marsters’ third touchdown pass — a two-yard dart that slipped between the hands of a Tigers defender and into the clutches of Landyn Dupper, who was behind the defensive back.

Roseburg finished its first-half scoring when, on the first snap after a punt, Steinacher nabbed a pass that was tipped near the line of scrimmage and returned it 22 yards for a touchdown.