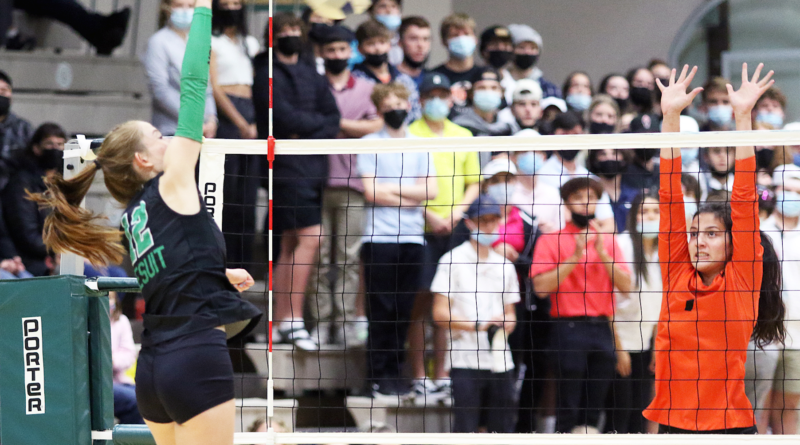 Rayna Reynolds helped lead the way for the Lions with 15 kills in 30 attempts, hitting for a .433 average while also having five blocks.

“What worked for us is when our middles stayed involved in the game,” West Linn coach Emilie Wilmes said. “Addie Hoover can see the court, so when she’s hitting, we had some major momentum-changing hits.”

“Both the outsides did their best to really keep the ball in play … and keep the game going,” Wilmes said.

“I am beyond proud of the competitiveness they showed,” Sheldon coach Martine Wodke said. “It has been an honor to coach this team.”

The top-seeded Lions improved to 26-2. They’ll face Central Catholic in a Class 6A semifinal match Friday at 6:30 p.m. at Liberty High School. Sheldon finished its season 25-8.

“Last night was one of the most intense and incredible volleyball matches I have ever had the privilege of coaching or watching,” Central Catholic coach Kayla Hambley said Wednesday. “South Salem came to play; they are talented and tenacious.”

“It was a tough loss to Central Catholic tonight,” South Salem coach Matt Leichty said. “Our girls fought hard, just a little slow getting started, and it cost us in the end. Coming back from down 2-0 to tie it up and force a fifth set at Central Catholic is no easy task. Great, hard-fought battle by both teams.”

Senior libero Renee Tassin helped lead the way for the Rams in the victory.

“She put away more aces than any previous match before, her serve receive was a 2.2 (with no errors), and 17 digs, and her ability to chase down balls and pick up tips is unmatched,” Hambley said. “She is only a second-year varsity player, and this is her first year as a libero for our varsity team, but you would never know it. She plays like a four-year veteran starting libero.”

Junior Sofia Cooper added 13 kills for the Rams, while also stepping up in the decisive fifth set.

“Without her grit during the fifth set, I believe the win would have gone to South Salem,” Hambley said.

“I’m so proud of my team for battling back after dropping sets three and four,” Hambley said. “We worked hard all week on serving under pressure situations and fighting back when our team is down. I feel incredibly blessed that our team is deep enough that our ‘non-starters’ can scrimmage against our starting lineup and challenge them just about as tough as many of the top teams in the state.”

Central Catholic improved to 24-2. The Rams will face West Linn in a Class 6A semifinal match Friday at 6:30 p.m. at Liberty High School. South Salem finished its season 19-7.

“Overall, the team passed a 2.4, which really contributed to us being able to run a strong offense,” Bend coach Kristin Cooper said.

Bend improved to 23-2. The Lava Bears will face Jesuit in a Class 6A semifinal Friday at 8:30 p.m. at Liberty High School. Oregon City finished its season 20-8.

“The Ravens played a tough match against a great Churchill team,” Ridgeview coach Randi Viggiano said. “Our tough serving and aggressive offense kept them out of system. Both teams played great defense and fought hard.”

Ridgeview improved to 16-4. The Ravens will face top-seeded West Albany in a Class 5A semifinal at 1:30 p.m. Friday at Liberty High School. Churchill finished its season 16-4.

“The first set we played well, but conservative,” West Albany coach Megan Wallace said. “In sets two and three, we played confident and didn’t hold back. The fourth set, La Salle turned it up and weren’t going out without a fight, and it was a battle until the very end where we went back and forth point for point starting at 22-21.”

West Albany moved to 24-3 on the season. The Bulldogs will face Ridgeview in a Class 5A semifinal match at 1:30 p.m. Friday at Liberty High School. La Salle Prep finished its season 19-6.

“It was a great team effort tonight,” Crescent Valley coach Troy Shorey said. “We have had better serve-receive nights, but our offense did a great job of making up for it. The players are excited to be treading new waters and striving for their goals.”

Kara Paterson led the Raiders with four aces and 27 digs. Bella Jacobson had a team-high 17 kills, while adding one stuff block and seven digs. Kamden Mitchell led the team in assists with 23 and added four kills and 13 digs.

Crescent Valley improved to 19-4. The Raiders will face Wilsonville in a Class 5A semifinal at 3:30 p.m. Friday at Liberty High School. Silverton finished its season 16-6.

“It was solid all-around play by our team,” Wilsonville coach Scott Thompson said. “We served and serve-received well, set the ball well and hit at a high level.”

Wilsonville improved to 20-4. The Wildcats will play Crescent Valley in a Class 5A semifinal at 3:30 p.m. Friday at Liberty High School. North Bend finished its season 21-2.

“The girls played well, met their goals and out-prepped Baker tonight,” Philomath coach Denee Newton said. “We won the serve-receive and serving game, and Baker just couldn’t match our blocking and versatility of attackers. They were very scrappy, though, and they made for a great match. Gonna study hard and prep for Sisters.”

Philomath improved to 12-9. The Warriors will face top-seeded Sisters in a Class 4A semifinal match, which will be held at 6:30 p.m. on Friday at Corvallis High School.

“Tonight was a hard-fought match for us against Philomath,” Baker coach Ali Abrego said. “We came back from a six-point deficit in the first set to challenge them on game point. Playing against an older team, it was awesome to see how our girls rose to the occasion and continued to persevere after a rough second set. They finished the match working cohesively together.”

Cascade improved to 20-4. The Cougars will face Valley Catholic in a Class 4A semifinal at 8:30 p.m. on Friday at Corvallis High School. Sweet Home finished its season 12-6.

Gracie Vohs led the way for the Outlaws with 22 kills, eight blocks and three aces. She also had a huge block in the fourth set to win the match. Bre White had 13 kills and Sydney Myhre added 11 kills. Maddie Pollard went on a key seven-point serving run to bring Sisters back from behind.

Sisters improved to 21-3. The Outlaws will play Philomath in a Class 4A semifinal Friday at 6:30 p.m. at Corvallis High School. Siuslaw finished its season 15-9.

The third-seeded Valley Catholic squad kept alive its hopes for a third consecutive Class 4A state title by rallying to get a 20-25, 25-18, 25-16, 25-21 win over No. 6 seed Cottage Grove in a match played Tuesday at Valley Catholic High School.

Izabelle Senters and Gracie Arnold helped get Cottage Grove off to a strong start to the match.

Valley Catholic improved to 19-4. The Valiants will face Cascade in a Class 4A semifinal match on Friday at 8:30 p.m. at Corvallis High School. Cottage Grove finished its season 15-7.