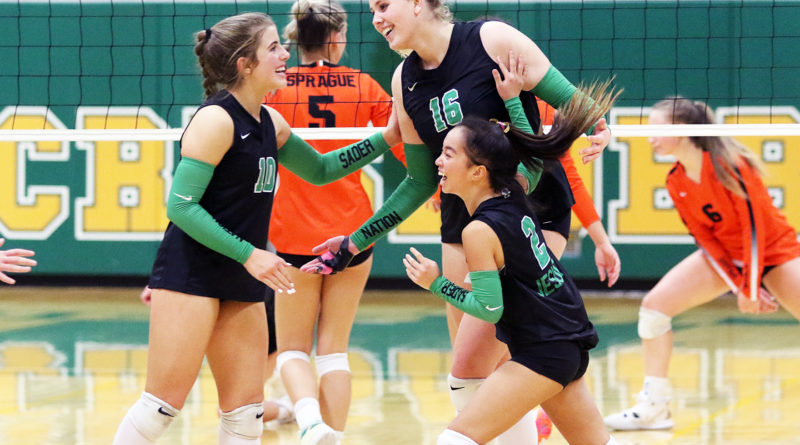 Sure, the Jesuit volleyball team got off to a slow start.

But once the Crusaders got going, there seemed to be absolutely no way anyone was going to stop them — Sprague sure couldn’t.

Jesuit, after trailing the Olympians 22-21 in the first set, responded by scoring the next 14 points on its way to posting a 25-22, 25-4, 25-12 victory in a Class 6A state playoff quarterfinal match Tuesday at Jesuit High School.

“We tend to do that,” Jesuit freshman setter Jackie Carle said of the Crusaders’ slow start and big finish. “We just need to get it out of our heads sometimes, and just know that we have the talent, and execute it.”

“I think our team has a habit of starting off slow,” said Jesuit senior middle blocker Tess Masingale. “But, slowly, we’re breaking out of that, and we’re hoping not to do that in our next games. But I think we did a good job of coming out of that slow start. It was great. We really played our best and played like a team. It was great to see that.”

Jesuit, the Metro League champion and the No. 3 team in the final OSAA power rankings, improved to 26-2. The Crusaders also advance to the semifinal round of the Class 6A state playoffs, which will be held at Liberty High School in Hillsboro.

“Oh, it’s awesome,” Carle said. “My team is great, and this is a really big step in my career, and I’m really excited to go on with my team, and they’re all great players. We have so much talent on our team.”

“It’s awesome,” Masingale said. “Getting to Liberty was always one of our goals. I’m super excited that we’re here. We did a good job of pushing through this season to make it here.”

Jesuit will meet Bend in a tournament semifinal match starting at 8:30 p.m. on Friday. Central Catholic and West Linn will clash in the other semifinal.

“We just want to continue playing great and execute the best that we can,” Carle said.

Sprague, the No. 6 team out of the Mountain Valley Conference and the No. 22 team in the power rankings, finished its season 11-15.

But the Olympians, playing as though they had nothing to lose, looked ready to battle the Crusaders strong early in the match.

Sprague held a 15-13 lead after an ace by junior Rubie Morrissette. The Olympians then looked to be on the verge of a first-set victory, as they led 22-21 following a point on serve by junior Megan Smith.

That’s when Jesuit got going — in a big way.

The Crusaders tied the score, at 22-22, on a sideout kill by Masingale, coming off a set by Carle. Then, with sophomore Tiana Takayama serving, Jesuit scored three consecutive points, the last two coming on kills by junior Ceanna O’Loughlin, to win the opening set 25-22.

The Crusaders kept rolling in the second set. With Takayama serving, Jesuit scored the first 10 points of the set. Masingale had three kills during the scoring spree. Junior Isabel Patterson added a kill and a block, and Takayama had an ace, as Jesuit rolled to the 10-0 lead.

Jesuit would go on to score the final six points of the set, with Masingale getting the last point on a kill coming off a set by Carle, to get a 25-4 win.

“Our passing was really good, and just getting to the ball,” Carle said. “We were really scrappy, which is good. Getting it out of our heads after the first set was a game-changer.”

The Crusaders also got off to a roaring start to the third set. With senior Harper Buchholz serving and starting things off with an ace, Jesuit jumped out to a quick 7-0 lead.

Kills by Masingale and Patterson pushed the margin to 11-2.

Sprague tried to fight back. The Olympians, getting aces from sophomore Sidney Friesen and senior Abby Sorensen, and two kills by Sorensen, trimmed the third-set score to 12-8. But Sprague wouldn’t be able to get any closer.

Jesuit, with Buchholz serving, scored seven straight points, giving the Crusaders a 22-10 advantage, on their way to closing out the set 25-12, giving the team a 3-0 sweep — and a berth in the final four.

“This was so fun,” Masingale said. “I’m so glad we made it here, especially as a senior.”

Masingale led the way for the Crusaders with 15 kills. O’Loughlin added 12 kills, and Patterson had 10. Carle had 15 assists. Patterson led the team with 17 digs. Senior Maisie Alexander had 12 digs, Takayama had 10, and Buchholz added nine. Buchholz had four aces.

On Saturday at the Class 6A state tournament, the third-place match is set for 12:30 p.m., with the state championship match scheduled for 7 p.m.