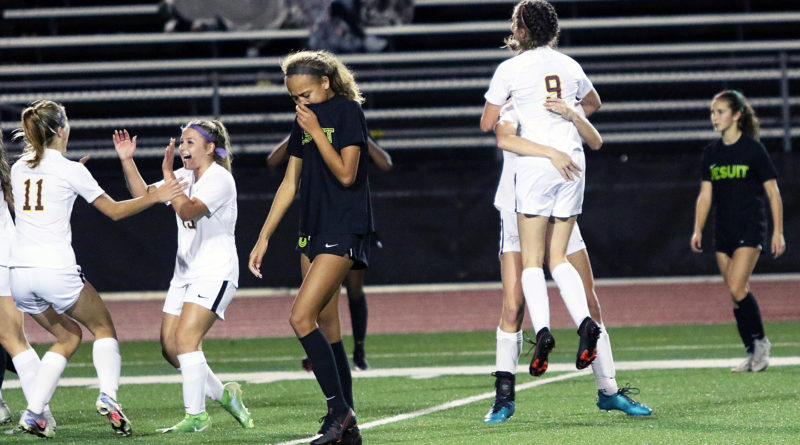 Despite its doubters, the Forest Grove girls soccer team isn’t done yet.

To keep their season going, the Vikings had to pull off a major upset — although maybe it wasn’t so much of an upset in their minds.

“Forest Grove hasn’t had a season like this forever. This means everything for all of us,” said Vikings senior Makenna Speer, who converted a penalty kick to tie the score at 2-2 late in the second half. “This is probably the most fun we’ve had this season. We were really looking forward to this game. There were a lot of people who told us before this game, ‘I’m sorry, but you’ve had a good run.’ But all the girls were sending each other messages, saying, ‘We’ve got this.’ It’s just a team, just a name.”

“All of our hard work paid off, and that feels great,” said junior Sophia Broberg, who scored the winning goal on a free kick with 2 minutes and 3 seconds left in overtime. “We’re showing people that we can go all the way.”

“That’s really awesome,” Broberg said of reaching the quarterfinals. “We tied Sherwood the first time we played them, so it’s going to be a fun match.”

“We played them midseason, and we gave them a run for their money, as well,” Speer said.

Jesuit, the No. 1 team out of the Metro League, the No. 1 team in the OSAA power rankings, and the three-time defending state champions, finished the season 13-2. The loss was the first postseason setback for the Crusaders since they fell 2-1 to Sunset in a 2016 state semifinal game.

In Tuesday’s second-round thriller, Forest Grove held a 1-0 lead at halftime, thanks to a corner kick goal from the right side by senior Lily Everson, coming with about 10 minutes before the intermission.

“We were thinking, at that time, that we can’t let the intensity drop, because most teams get complacent when they’re up 1-0, so we just dug deep and we were like, ‘We’re not losing this,’” Speer said.

But Jesuit seemed to have other ideas.

The Crusaders, fired up to start the second half, tied the score at 1-1 when, after Forest Grove was whistled for a handball in the penalty box, senior Taylor Krueger put her penalty kick off the right post and into the back of the net with 30:16 remaining in the second half.

From there, Jesuit kept the pressure up, getting shots from sophomore Abigail Cox and freshman Kaitlyn MacLennan. The Crusaders also got a key defensive play from junior Audrey Kent, who knocked the ball from Forest Grove sophomore Elise Broberg as she looked to have an open path to the Jesuit goal with 13:43 left to play in regulation.

But the determined Vikings wouldn’t be denied.

With 5:40 left, Jesuit was whistled for a handball in the penalty box. Speer then yelled over to Forest Grove coach Ignacio Olvera, ‘I got this, this is mine.’

“As a player, personally, I’m a big believer that this is going in the back of the net, and no one is stopping it,” Speer said.

Jesuit sophomore goalkeeper Claire Lindsey was able to deflect Speer’s penalty kick, but the ball still found its way inside the left post and to the back of the net, tying the match at 2-2.

“The tip of her fingers touched it, but a lot of times when I take PKs, it’s powerful and it’s low, which is what I was trying to do — hard and off to the side,” Speer said. “That was probably one of my highlights of the season.”

“I had all the confidence in her,” Sophia Broberg said. “She’s a great player, and when she took it, I knew she had it. It was great to tie it up and get back in it.”

Neither team scored again in regulation, sending the contest to two 10-minute overtime sessions. After a scoreless first 10 minutes, and as the second OT session was winding down, it looked like a penalty-kick shootout was a definite possibility — but that’s when Sophia Broberg stepped up.

With just over two minutes remaining, the Vikings were awarded a free kick, from about 27 yards on the left side. Broberg took the kick and blasted her shot inside the right post of the Jesuit goal, giving Forest Grove a 3-2 lead with 2:03 remaining in overtime.

“At first, I was really nervous, because it was our only opportunity, and I wanted to take every opportunity that we could. I just tried to stay as calm as I could and kick it in,” Broberg said. “I was trying to take it to that front post and stay composed. And I just trusted my team that, if anything happened, they would get there. The trust between my team and me was the biggest thing that got it to the back of the net. I felt really, really relieved.”

“Oh my gosh. I had full faith in her, as a player and a teammate,” Speer said. “She’s been along by my side. When I saw her get on that line, I’m going, ‘Either she’s hitting this in, or one of us is getting a piece on it.’”

Just over two minutes later, the Vikings were celebrating their victory over top-seeded Jesuit.

“It was just ecstasy, pure joy. This means everything. These girls have worked so hard for everything that we have,” Speer said. “We get up at 6 in the morning to go lift weights before school every day, and we have two-hour practices in the evenings, and we’re even out there on Saturdays. This means everything to us, especially to us seniors. This is our last chance, and we just beat the No. 1 team.”

“I was really emotional,” Sophia Broberg said. “We’ve worked so hard, getting up at 6 in the morning to go run and train. All the hard work paid off. This was super fun. These girls are amazing.”

The winner of Saturday’s match at Sherwood will face Beaverton or Bend in a Class 6A semifinal match Nov. 9.