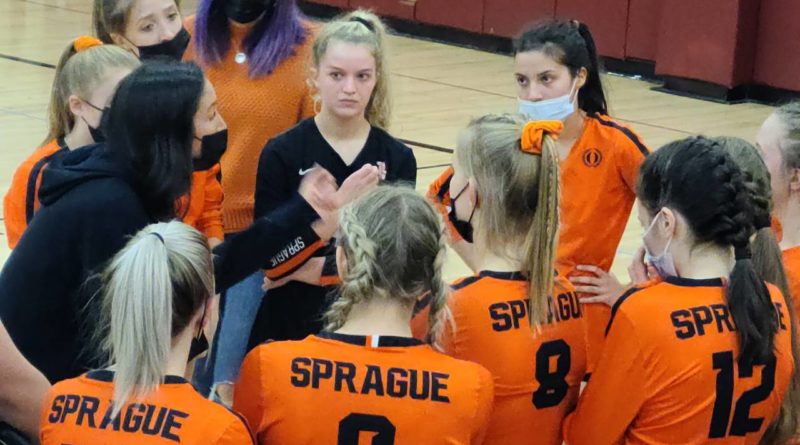 The Olympians knew they were better than the No. 22 seed they received in the bracket, and they’ve spent the past week proving it.

In Wednesday’s first round, they went to Newberg and knocked off the Tigers in five sets. On Saturday, they needed five sets again, and this time, they stunned No. 6 seed Sherwood, beating the Pacific Conference champions 25-23, 22-25, 25-23, 22-25, 16-14 at Sherwood Middle School.

Sprague becomes the lowest seed to advance to the 6A quarterfinals since West Linn made it as a No. 22 seed in 2013.

“We don’t think we deserve to be at 22nd,” said senior Abby Sorensen, who had a match-high 22 kills. “So, we decided to prove that tonight by pushing ourselves to our limits.”

Three years after the Olympians (11-14) made a surprising run to the state final, they’ve earned a rematch in Tuesday’s quarterfinals against the team that beat them in 2018 — No. 3 seed Jesuit, which swept West Salem in its second-round match as it bids for a third consecutive title.

“I think we’re going to play our hardest,” Sorensen said. “It should just be a fun game. We’ll put it all out there. It’ll be one to remember.”

The Olympians might not have had momentum coming into the postseason, but one thing 11th-year coach Anne Olsen said they had going for them was playing in the rugged Mountain Valley Conference, which has three teams in the quarterfinals.

“In our conference, it’s tough to go play at other people’s houses,” Olsen said. “These girls have definitely showed why, even though we were the sixth-place team in our league, we still weren’t some team to mess with. The girls pulled it together, and it’s just phenomenal to be able to coach these girls. It’s just amazing.”

The Bowmen (18-4), who saw a 15-match win streak come to an end, had a balanced attack all night, with five hitters recording seven or more kills — led by sophomore Emily Fulton’s 17 — but the Olympians made them work for every point.

Junior libero Sarah Jones, in particular, had several phenomenal digs in the fifth set, when the Olympians erased 6-3, 13-11 and 14-13 deficits.

“Hands down, Sarah stepped it up tonight,” Olsen said. “She knew her job, and she got it done. She ran that back row and took care of business.”

Tess Masingale had 10 kills with a .526 kill percentage, Izzy Patterson added eight kills and 11 digs, and CeAnna O’Loughlin had seven kills to help power the third-seeded Crusaders (25-2) to a 25-22, 25-8, 25-20 home victory. Maisie Alexander had seven digs, four aces and 18 service points, and Jackie Carle had 29 assists.

“McNary played us tough from start to finish,” said Saxons coach Matt Leichty. “We got a little rattled in set 2 and let that one slip away from us, but the team responded well, came out strong and played a really solid third set. We then did what we needed to wrap it up in the fourth.”

Emma Burlingame had 12 digs and two blocks, Hannah Wilborn added three blocks, and Maile Chan had 10 digs for the Mavericks, who finished 14-11.

“Our offense was unable to find a rhythm against Bend,” said Mountainside coach Lena Chan. “A solid season for all these players and well done by the entire team for continuing to improve their game and support each other.”

The Southwest Conference champion Irish (21-7) traveled up I-5 and knocked off Mt. Hood runner-up Clackamas 25-12, 25-19, 25-16 to reach the quarterfinals for a fifth consecutive season. Beaux Bruegman led No. 9 Sheldon with five kills and 17 assists, while Gwen Fife had 10 kills, Kaitlyn Wood added five kills and three blocks, and Elle Bruegman had 14 digs and five assists.

The Hawks, in their first season, finished 17-7.

“It was a very competitive match,” Rams coach Kayla Hambley said. “They are a talented team.”

CLASS 5A FIRST ROUND

“After being down by quite a bit in the first set, we rallied and kept it close, then won a close set against a tough Redmond squad,” said Foxes coach Kate Trimble. “We went up 6-0 in the third and carried that momentum to finish the match.”

The top-seeded Bulldogs (23-3), who won the Mid-Willamette championship, cruised to a 25-8, 25-5, 25-7 home win as Hailey Heider served 16 aces — including nine during a 13-point service run in the second set — to go with nine kills and five digs. Sydney Harrington added 22 assists and four kills, and Maddy Hellem had 13 digs. “We dominated with our serving this match,” said West Albany coach Megan Wallace.

Jenna Albrecht had 11 kills, three aces and five digs, and Elle Owen added five kills and three blocks to lead the 2019 state champion Ravens (15-4), the No. 4 seed and Intermountain champion, to a 25-8, 25-19, 25-13 home win. Madie Vaughn had six kills, six digs and two aces, Kylee Rost had 13 digs, and Paige Capitani had five kills for Ridgeview.

CLASS 4A FIRST ROUND

The two-time defending champion Valiants (18-4), the No. 3 seed, advanced to the quarterfinals with a 27-25, 22-25, 25-18, 25-9 home win. Freshman JoJo Christiansen’s seven-point service run in the fourth set helped Valley Catholic put the match away.

Junior Abby Berndt, who recently moved to outside hitter, had 11 kills with a .346 hitting percentage, and Fran Eisenhardt added 13 kills and four aces. Freshman Addie Emerson chipped in 10 kills, Katiya Blas-Arellano had 43 assists, and Sophia Rewers (21 digs) and Kylee King (19 digs) anchored the back line.

Junior Desiree Tupua had 18 kills, nine blocks and 12 digs, and freshman Rhianna Lane had seven blocks to lead the ninth-seeded Vikings (15-8), making their first playoff appearance since 2016, to a 27-25, 25-20, 25-14 win at North Marion. Hailee Outlaw and Mylee Blake added six kills apiece for Siuslaw, which had not won a playoff match in the past 10 years.

The No. 2-seeded Cougars (19-4), in the postseason for the first time since 2017, reached the quarterfinals for the first time in the past seven years with a 25-10, 25-20, 25-23 home win. Grace Neer had nine kills and four blocks for the Tigers (8-7), Makenna Shorts added seven digs, seven assists and two blocks, Izzy Kemp had eight assists and seven digs, and Ari Myer had 15 digs.

“Although we weren’t able to walk away with the win, I am extremely proud of this group of girls,” said La Grande coach Melinda Becker-Bisenius, whose team overcame a COVID quarantine, several injuries and the death of a teammate’s father to reach the playoffs. “This group never gave up, and it showed tonight after getting beaten badly in the first game.”

The 2019 runner-up Huskies (12-5) began their playoff run with a 25-11, 25-18, 25-21 home win. Sweet Home coach Mary Hutchins praised the play of setter Kailee Pepple, who did a good job distributing the ball to hitters Jamie Seward, Adaira Sleutel and Chloe Tyler.