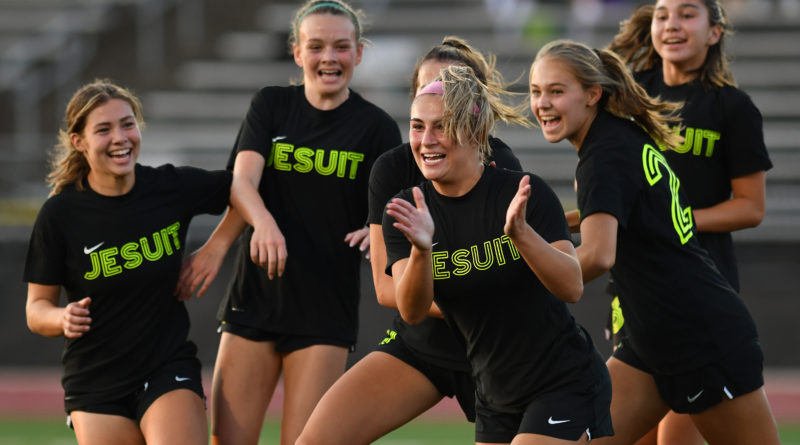 6A boys first round

Kaden Young scored all four goals for the 19th-seeded Titans (8-6-1), including a 65-yard strike in the second overtime period to tie the score with three minutes left and his last in the final minute off an assist by Drew Zohner to beat the host Falcons (7-6-1). Young has 13 goals this season, while Zohner has eight assists.

Angel Nicolai Herrera finished with eight saves for West Salem, which rallied from a 2-1 halftime deficit to become the lowest seed to win in the first round.

“What a game to be a part of,” Titans coach Sean Young said. “Passion, fantastic goals and a never-give-up attitude. I’m very proud of this team and their response to adversity.”

Zach Marostica had a goal and two assists, and Andrew Turner and Shinjiro Metzger also scored for the 11th-seeded Apollos (9-5-1) in their home win. Marostica and Metzger have five goals apiece this season.

Sunset coach Conrad Buck called Metzger “a beast all over the field today, playing at left defense, left wing and center forward at different times and being a dominant presence at all three.” He also praised the work of his center midfield trio of Turner, Marostica and Timi Evrensoglu, who controlled possession and helped limit the Cavemen (6-6-2) to two shots on goal.

Elijah Leach scored the Cavemen’s only goal on a free kick midway through the second half for his sixth goal of the season. Jacob Moss made 12 saves to keep Grants Pass in the game.

Griffin Rea assisted on Zac Walker’s first-half goal, then scored two in the second half to lift the third-seeded Axe (13-2) to the home win Friday night. Zach Petrina finished the scoring in the final minute, pouncing on a rebound in the goalmouth. Tate Glock earned his ninth shutout of the season, helped by midfielder Whit Schatz and center backs Owen Whitney and Anders Davidson shutting down McNary’s quick press and counterattack.

The No. 7-seeded Cardinals (11-3-2) got goals from Eliah McLeod-Ali in the 65th minute and freshman Max Eisenberg’s first career tally in the 79th to pull out the victory at Ida B. Wells. Reece Fisher made two saves to record the shutout. “We didn’t play our best match but managed to be cool, calm and collected in the critical moments,” said Lincoln coach Pablo Dipascuale, who also credited Max Edwards and Oliver Stone for their work up front.

Luis Escalante Lopez opened the scoring with a rebound goal in the 16th minute, and Alden Himes scored two second-half goals to help the 12th-seeded Crimson Tide (12-1-2) post their first playoff win since 2010. Miguel Lopez had two assists for Glencoe, and Matt McKedy made two good saves toward the end of the game to preserve his 11th shutout of the season.

Darren Green, Caden Davis, Angel Mejia-Flores and Henrik Stackle-Vogt scored their penalty kicks during the shootout as the 17th-seeded Lightning (7-4-4) continued defense of their 2019 state title by escaping McMinnville with a 4-2 win in PKs.

Regulation finished scoreless, and Franklin opened the scoring early in the first overtime period when Tony Ramirez-Lopez headed home a flicked-on ball to the back post from Davis off a throw-in by Will Denniston.

Ceazar Daniell scored on a rebound with just over two minutes remaining to lift the 13th-seeded Warriors (9-4-2) to the win in Southeast Portland.

The 15th-seeded Royal Scots (9-3-3) advanced past the first round for the first time since 2016 on the strength of a first-half goal by senior Filiberto Alarcon.

6A girls first round

The 20th-seeded Pacers (5-6-4) scored the game’s only goal four minutes before halftime and made it stand up for the road win over the Olympians (9-4-2).

Sprague had a golden opportunity to score in the 20th minute, with Amity Rogers, McKenzie Wernicke and Nicky Williams combining to beat University of Portland-bound keeper Abby Presnell before the Pacers swept the ball off the goal line, preserving the shutout.

The top-seeded Crusaders (13-1) opened their bid for a fourth consecutive state title with a convincing win at Cronin Field, with Abby Cox and Audrey Kent scoring two goals apiece and Claudia Rose chipping in a goal. Cox has 12 goals this season.

“The game was played in difficult conditions due to the wind, but I felt we managed it well,” Jesuit coach Steve Fennah said.

Elle Frazier scored four goals to give her 28 for the season and assisted on another as the PIL champion Generals (13-1-1) made the Celtics’ first playoff appearance since 2017 a short one with a convincing victory in North Portland. Caprial Loescher, KT Rosesinger, Tessa Matteri and Hana Fulbright also scored for third-seeded Grant.

Isabelle Cruz headed home a corner kick from Bella Bottero in the 55th minute for the game’s only goal, and Eve Lynx made five saves during a 60-second span to preserve the shutout as the 18th-seeded Panthers (9-3-2) won in Southwest Portland to advance to the second round for the first time in the past four years. Cruz, the team leader in assists, scored her seventh goal of the season.

Kennedy Fletcher scored just before halftime to break a scoreless tie and added a second goal 13 minutes into the second half as the ninth-seeded Cardinals (11-4-1) pulled away for the win in Southwest Portland. Riley Buehler, Alana Harry and Cedella Wright also scored for Lincoln.

Ella Weathers scored two second-half goals and assisted on Amanda Gribble’s goal as the eighth-seeded Bowmen (7-3-6) pulled away after a scoreless first half. Weathers has 13 goals this season for Sherwood, which won the Pacific Conference title, while Gribble’s goal was her sixth. Tali Kozma had two outstanding saves to preserve the shutout.

“Ella used her speed and skill to break down the defense, and center back Taylor Holt kept the defense organized to prevent any serious threats on goal,” Bowmen coach Katie Hartman said.