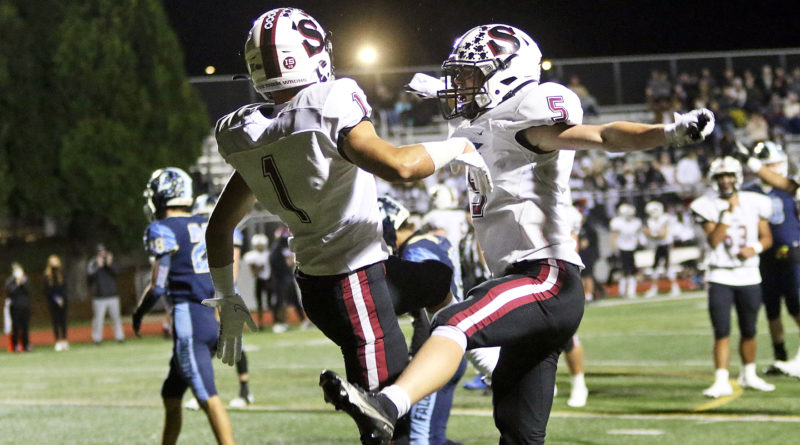 It’s said that it’s not how you start, it’s how you finish.

Maybe no one knows that better than the Sherwood football team.

After starting the season by going 0-4 in nonleague games, the Bowmen turned things around in a big, big way, winning five consecutive games in Pacific Conference play — with win No. 5 being the biggest of them all.

Sherwood, after that 0-4 start, secured the conference championship by beating Liberty 49-39 in what amounted to a league title showdown in a conference finale played Friday at Liberty High School in Hillsboro.

“It’s amazing. After starting off 0-4, it was really hard, but we came back fighting,” said senior receiver/defensive back Cody Hall, who had a touchdown catch and an interception. “We’ve got a lot of young guys on our team, and we’ve got just seven or eight seniors on our team. It’s hard to overcome starting off 0-4, and then coming back and winning five straight, but we did it.”

“This means everything to us,” said sophomore running back Nolen Scott, who scored two touchdowns, including one on the opening kickoff. “I mean, Coach (Kevin) Hastin coming in and changing this program around, it’s more than I could ever ask for. It’s awesome.”

“This is amazing,” said senior Seth Glenn, who ran for 145 yards and four touchdowns. “Last year (the 2021 spring season), we lost to Newberg (14-9), and we lost the league title to them. League titles have been something we’ve been getting for a while now, and after losing it last year, this one feels even bigger.”

Sherwood improved to 5-0 in Pacific Conference play (5-4 overall), giving the Bowmen their first conference crown since 2019. And, it could be said that the title was a bit unexpected — following the 0-4 start to the season.

“It’s insane,” Hall said. “We had a lot of people who doubted us, after we went 0-4. It was hard. Honestly, I had some doubts. There were times when we cried, but we came together, and we fought the rest of the way.”

“We had hope, but it was little to no hope,” Scott said. “But we’ve been playing together since we were in third or fourth grade. We’re all family, we’re all brothers, and we came out and got our stuff together. We came out in league, and we did it.”

Liberty moved to 4-1 in conference games (6-3 overall), putting the Falcons in second place in the final standings. Liberty, like Sherwood, entered Friday’s game with the chance to, and the aspirations to, win the Pacific Conference championship.

“It means a lot, especially in our conference,” said Liberty senior quarterback Hiro Diamond, who had an amazing performance, accounting for 397 yards of total offense and five touchdowns. “It was something the seniors really wanted — that was a big goal we had prior to the season. As a team, we’re glad we were able to play for it.”

With both teams having their sights, and hearts, set on winning the conference championship, the action seemed to be non-stop from the opening kickoff all the way to the final minute of the contest.

Scott ignited all the fireworks, returning the opening kickoff 97 yards for a touchdown. But even that play was filled with dramatics, as Liberty senior Kane McNabb’s kick bounced off, and past, Scott before he was able to scoop up the ball on the 3-yard line. From there, he broke through a hole in the middle and sprinted all the way to the end zone.

“That’s what I do,” Scott said with a smile. “It took a really weird bounce. It hit me on top of the helmet, and I was like, ‘Oh no, this ain’t good.’ But a hole broke open, and I was gone. All of those blockers on the kickoff were amazing.”

Sherwood senior Bjorn Bergstrom added the first of his seven extra-point kicks to give the Bowmen a 7-0 lead with 11 minutes and 40 seconds left in the first quarter.

Liberty answered right back. In their ensuing possession, the Falcons moved 60 yards in 10 plays, capping the drive with a 15-yard touchdown pass from Diamond to senior Ethan Jones, who made a reaching catch in the back left corner of the end zone. The extra-point attempt was off the mark, leaving Sherwood with a 7-6 lead with 8:23 to play in the opening period.

The Bowmen wasted little time responding. Three plays later, following a 34-yard pass from Bergstrom to Hall, Glenn scored on a 31-yard run, upping the Sherwood lead to 14-6 with 6:59 remaining in the first quarter.

Glenn would score again in the opening period, reaching the end zone on a 5-yard burst, pushing the lead to 21-6 with 2:46 left in the quarter.

But determined Liberty would answer back again. A 35-yard pass from Diamond to senior Keenan Frye helped set up a 13-yard touchdown run by junior Michael Campos, trimming the Bowmen lead to 21-12 with 47.3 seconds remaining in a wild opening period.

Sherwood, and Glenn, weren’t about to slow down in the second quarter. Glenn opened the scoring in the period with a 14-yard touchdown run up the middle, giving the Bowmen a 28-12 advantage with 9:53 before halftime.

Liberty responded again. This time, it was Diamond scoring on a 31-yard run, cutting the Sherwood lead to 28-18 with 8:15 left in the second quarter.

Now, it was Sherwood’s turn to respond. The Bowmen did just that, getting a 17-yard touchdown pass from Bergstrom to Hall, who made a spectacular catch right in front of the left sideline in the end zone, pushing the score to 35-18 with 5:08 remaining in the period.

“It felt amazing,” Hall said of the touchdown. “I just went up for the ball, saw it coming, and it was a perfect throw by Bjorn. It was back shoulder, and all I could do was toe-tap it. I looked up, and the ref gave me the hands, and it was amazing.”

Liberty, after a defensive stop, got the ball back on its 17-yard line with 1:04 left in the second quarter. The Falcons weren’t going to be satisfied with going to halftime down 17.

Diamond completed two passes to Jones and one each to Frye and junior Landon Webber, moving the ball to the Sherwood 30-yard line with 12.7 seconds left in the half.

After an incomplete pass, the Falcons had time for one more play — and Diamond made the most of it. Dropping back to pass, the Liberty quarterback instead took off with the ball. He ran up the middle, cut to his right and sprinted to the end zone for a touchdown as time expired in the first half, leaving Sherwood with a 35-25 lead at the intermission.

“Well, we had a play called, and we had a missed assignment, a little hiccup, but I saw a hole, and credit to the line, I was able to slip through and get in there,” Diamond said of the scoring play.

The action continued to go back and forth in the second half.

Scott opened the scoring in the third quarter, reaching paydirt on a 20-yard run, giving Sherwood a 42-25 lead with 4:38 left in the period.

“I do what I do,” Scott said of the touchdown run. “Thank you to my linemen. That’s all I’ve got to say.”

Liberty answered right back when, following a 38-yard run by sophomore Mitchell Denniston, Diamond scored on a 15-yard run, cutting the Sherwood lead to 42-32 with 3:21 left in the period. The Bowmen would take that 10-point advantage to the fourth quarter — where things seemed to get even more intense.

Glenn, on the second play of the final period, scored his fourth touchdown, coming on a 3-yard run, upping the lead to 49-32.

Liberty answered with Diamond’s fourth touchdown run, this one coming from just a yard out, making the score 49-39 with 7:15 left.

“That’s just a part of football,” Diamond said of Liberty’s persistence in battling back again and again. “No matter what happens, you’ve got to keep going, play after play.”

The Falcons had a chance to get even closer after the defense forced Sherwood to turn the ball over on downs on the Liberty 30-yard line with 3:56 left.

Behind the passing and running of Diamond, the Falcons moved the ball to the Bowmen 17-yard line, where they faced a fourth-and-4 situation with just under a minute to play.

Sherwood would stop Liberty for no gain on fourth down, with sophomore Keaton Fried, with the help of many of his Bowmen teammates, making the clutch fourth-down tackle.

“This is the funnest game I’ve ever been part of in my life,” Scott said. “I mean, coming here as a sophomore, this is what I’ve been dreaming of ever since I was in third grade.”

“This was awesome. It was amazing, surreal,” Hall said. “Tonight was just a crazy night. My grandma got to watch me for the first time tonight.”

“That’s all our group of guys up front,” Glenn said, referring to the Bowmen group of linemen, including junior Trent Hodney, junior Nathen Fillinger-Palotay, freshman Jr. Laulaupeaalu, senior Nolan Manning and junior Alex Armas, among others. “They’re amazing. They’re not the biggest guys, but they’ve got some heart. On that one touchdown, that was the biggest hole I’ve run through all year.”

Bergstrom completed 8 of 9 pass attempts for 125 yards and a touchdown. Hall had five catches for 87 yards. Scott had two receptions for 32 yards, and Glenn added one catch for six yards.

For the Sherwood defense, Hall had an interception, and Hodney, junior Oliver Fisher, Armas and Glenn each had a tackle for loss.

For Liberty, Diamond completed 18 of 30 pass attempts for 225 yards and a touchdown. He ran for 172 yards and four touchdowns on 26 carries.

“Every time you step on the field, especially with a team like this, our team, it’s always fun,” Diamond said. “It always feels great to play together on a Friday night.”

Both teams will open the Class 6A state playoffs on the road Nov. 5. Liberty will play at Jesuit, while Sherwood will travel to Sandy.

The Bowmen, with plenty of momentum coming with their five-game win streak, are looking to keep rolling in postseason play.

“We’re hoping to win some games,” Hall said. “We’re probably going to be the underdog in every game, after starting off 0-4, but we’re going to fight.”

“I think we’re going to win out now,” Glenn said with a smile.