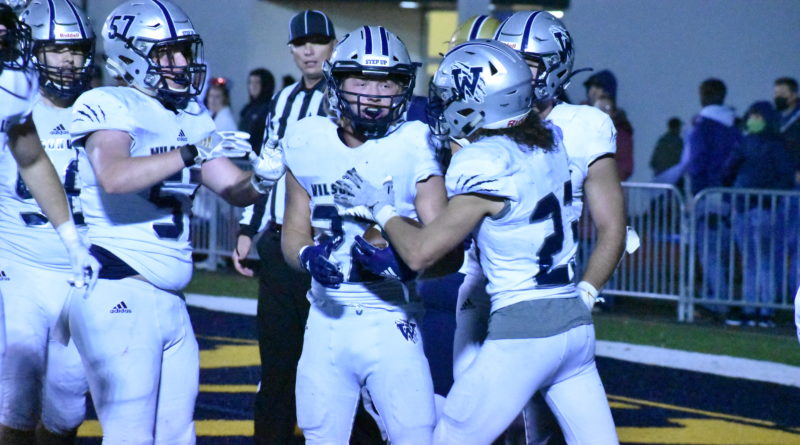 CANBY — The Wilsonville student section started the night with the bold chant of ‘I believe that we will win.’ Those same students ended the night by serenading their football team with a rendition of ‘We are the Champions,’ after Wilsonville scored a dominant 38-12 win at Canby to claim the Northwest Oregon Conference West crown Friday night.

“The community really came out tonight — our student section and our fans. It was great,” Wilsonville sophomore Kallen Gutridge said.

The Wildcats struck first with a 16-play, 85-yard drive that took almost seven minutes off the clock in the first quarter. The march ended with quarterback Chase Hix firing a touchdown dart over the middle to freshman receiver Nick Crowley.

Facing third-and-long early in the second quarter, Canby’s Matthew Soles caught a pass in the flat, only to absorb a big hit from Wilsonville’s Wesley Hur. The ball ended up on the turf, and Gutridge swooped in for the scoop-and-score from 30 yards.

“Wes made a great hit, the ball came out, and I made a play with the opportunity that I was given,” Gutridge said. “The end zone was coming up fast, and there was one guy in my way. I figured if I made contact with him that I would get in.”

Hix took a deep shot to Cooper Hiday in the end zone as time expired in the first half. Canby was called for pass interference on the play, moving the ball close enough for Wilsonville kicker Joey Friedman to connect from 31 yards to make it a three-score margin at halftime.

The Wildcats moved into position for Friedman to attempt a 40-yard field goal from the right hashmark.

It turned out to be a trick.

Holder Jack Johnson jumped to his feet and lobbed a deep pass to the far side of the field, finding Judah Lesh for a 23-yard touchdown.

“He lobbed it up, and I got it,” Lesh said. “That gave us the momentum we needed to win — that sealed the deal.”

The Wildcats added a short touchdown run by the end of the third quarter to take a 31-0 lead.

“Emotions were running deep tonight, and we were battling every play,” Hix said. “We had two defensive touchdowns, our freshman receiver scored. Everyone was making plays — we were hitting on all cylinders.”

Canby’s offense failed to crack the Wildcats’ 40-yard line until well into the fourth quarter.

“Speed is our best attribute — we just play fast,” Cooper said. “We feel like we’ve been underrated after losing so many seniors last year, but we’ve had a lot of people step up.”

“The dogs up front set up those big runs,” Ogden said. “We went after them yard by yard and punched them in the mouth every single play.”

Wilsonville (9-0) tops the OSAA’s rankings heading to the 5A playoffs next Friday.

“It’s a win or go home mindset now, and we’ll give it all we have,” Hix said.

“This is what we have worked so hard for, and now we want to be in that state championship game on Thanksgiving Day,” Ogden added.