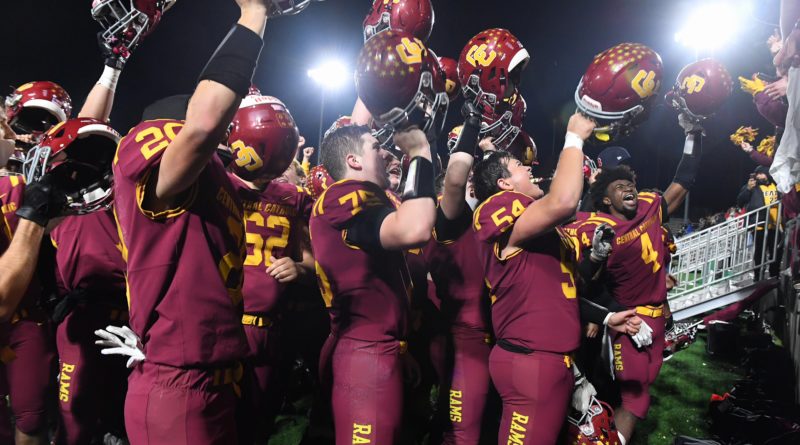 Riley Williams and his Central Catholic teammates circled Friday night’s game against Clackamas on their calendars when the football schedule came out.

“We saw Clackamas as that last game and were like, ‘Oh, yeah. It’s time to show up,’” the Rams junior said.

Before a national audience on ESPNU, Williams and the Rams dispelled any doubts onlookers might have had, seizing control late in the second quarter en route to a 38-20 victory at Hillsboro Stadium to wrap up an undefeated regular season and the Mt. Hood Conference championship.

Williams caught two second-quarter touchdowns, both of the highlight variety, and finished with four catches for 106 yards to help cement his status as the state’s No. 1 junior recruit and Central Catholic’s place on the shortlist of state title favorites heading to the Class 6A state playoffs.

Williams, who sports more than a dozen offers from Power 5 schools as a tight end, moved outside Friday in the absence of senior Stryder Todd-Fields (back spasms) and top receiver Jordan King, who sprained an ankle last week against Gresham and left after testing the ankle for a handful of plays.

Out on the perimeter, the 6-foot-7, 235-pound Williams overwhelmed cornerbacks who gave up nine inches and 50 pounds to him.

He shrugged off his defender and showed off his speed on the Rams’ first touchdown, a 75-yard pass he caught at the Clackamas 40-yard line as he jetted down the right sideline.

His second score showed off his concentration after KJ Johnson-Gibson tipped the ball on a last-second jump ball at the goal line, snatching it from the air and traipsing to the end zone as the second-quarter clock hit triple zeroes.

“He probably opened some eyes tonight,” said Rams coach Steve Pyne, who had Williams work at receiver during practice this week in case King couldn’t go.

“I think a lot of the question marks people have about Riley are like, does he play with passion? Does he play behind his pads when he’s at tight end? And just showing that other piece of him tonight, that he can line up outside and be a matchup nightmare, certainly didn’t do him any disservice.”

Johnson-Gibson, a senior who’s considered one of the top corners in Class 6A, could only acknowledge Williams’ greatness on this night.

“He’s a good dude,” Johnson-Gibson said. “It’s a great matchup. Lining up against him is a really great experience. Just really fun to match up against somebody like him.”

Williams’ second score broke a 7-7 tie, and the Rams scored 24 consecutive points in the second half against a Clackamas defense that allowed four touchdowns over the previous seven weeks.

They featured senior Ellis Bynum in the final two quarters, when he ran for 106 yards and a touchdown and caught three passes, including a touchdown.

“Everybody was talking about how Central Catholic can’t run the ball,” said Bynum, who missed the first two weeks of the season with an injury. “And I feel like this was a perfect time, because we were on national TV, to show everybody what we can do, what my linemen can do.

“We wanted to show tonight that we are the best team right now. Next week, we don’t know yet.”

Next week kicks off the postseason, and the Rams (10-0, 8-0 MHC) look like they’ll be the No. 4 seed — which just so happens to match their seed in the 2019 playoffs, when they won the most recent of their five state championships.

“That 2019 team, that was a good team,” Williams said. “We’re up there at that level. State championship contenders, for sure.”

The Cavaliers (9-1, 7-1) appear to be the No. 8 seed in the bracket and will take some lessons into the postseason.

“I think we played good football, but it just snuck away,” said senior linebacker Kaden Ludwick. “We’ve got to fix some things, but I know we’ll come back from this even stronger. We’ll come back and be great.”

The way Friday’s game started looked as if it would be the Cavaliers celebrating by night’s end. After forcing a three-and-out on Central Catholic’s opening possession, junior Luke Ash broke off a 68-yard run, getting chased down by Hudson Normand at the Rams 5.

From there, three penalties stalled the drive, and after eschewing a short field goal try following an encroachment penalty, Chibu Enemuo stuffed Mateo Maehara behind the line on fourth down.

“I think we took it way too easy after that first run,” Johnson-Gibson said. “We thought it was going to be a little easier, but then they came back from that, and we didn’t expect it.

“We were totally even teams, but mental mistakes … we defeated ourselves. We got in our own heads. That’s basically what happened throughout the game.”

Still, the Cavaliers hung tough until midway through the third quarter, when the Rams blew them away with an offensive display worthy of Class 6A’s top-scoring team (48.3 points per game).

Bynum started the outburst by emerging from a pile at the line of scrimmage, bouncing a run to the left sideline and streaking for a 29-yard touchdown.

After a Clackamas punt, the Rams put together a 10-play drive, capped when sophomore quarterback Cru Newman pump-faked one way, eluded the rush and floated a pass to Bynum in the right flat, where Bynum broke a tackle and beat the defender to the pylon for a 23-yard score.

“I’m still not sure how Cru got out of that one,” Pyne said. “I’m going to start calling him Spiderman.”

After a career-best 39-yard field goal from Asher Wajskol, Newman put the bow on the victory with a 17-yard scramble that put the Rams ahead 38-7 with 3:43 to play.

“We certainly weren’t perfect tonight,” Pyne said. “Ellis, he’s a warrior, just a warrior spirit in that kid, and our offensive line played extremely well at times, and Cru put balls where they needed to be. I’m just really proud of our guys against a very good team.”