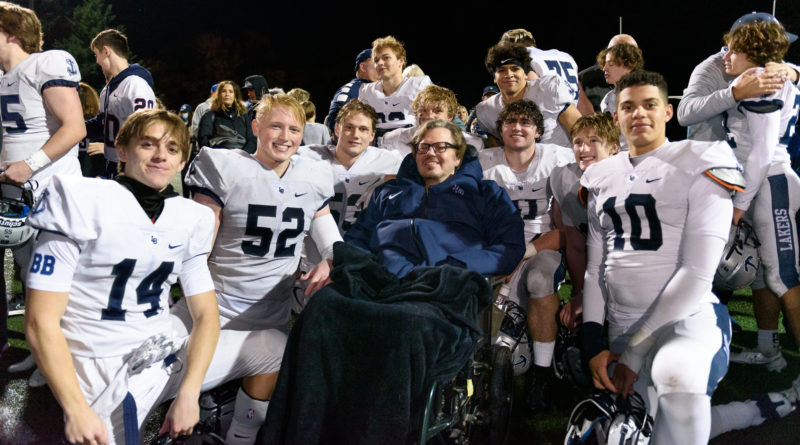 LAKE OSWEGO — If there were any concern about No. 3 Lake Oswego’s mindset after seeing its undefeated season vanish in last week’s loss to West Linn — well, you’ll be hard-pressed to find any.

In fact, any concerns might be reserved for the Lakers’ upcoming opponents.

Rather than dwelling on the defeat, Lake Oswego’s players and coaching staff viewed it as a wake-up call and an opportunity to show them where they could improve. It couldn’t have come at a better time — just before the playoffs.

“It really made us work harder in practice,” Lakers senior running back Gabe Olvera said. “I honestly think that loss was good for us because it’s better to have it then than later in the playoffs.”

Behind a few tweaks and adjustments, Lake Oswego pulled off a dominant performance by overwhelming No. 7 Lakeridge, 42-21, on Friday night in the Battle of the Lake rivalry game at Lakeridge High School. With the win, the Lakers share the Three Rivers League title with Tualatin and West Linn.

“It just makes you look at things differently when you lose a game,” Coury said. “We made some adjustments and we’re right where we want to be going into the playoffs, really. We’re playing some good football. West Linn was just one of those games you learn a lot from.”

The adjustments paid off immediately. Lake Oswego’s defense did not allow a first down in the first quarter and created two turnovers, including a fumble recovery and senior Benjamin Taylor’s interception. By the time Lakeridge got its initial first down near the beginning of the second quarter, Lake Oswego was already up by three touchdowns.

Three plays into the second quarter, Lake Oswego pushed its lead to 21-0 with Layne’s 14-yard touchdown pass to senior wide receiver Justius Lowe on an over-the-shoulder catch in the end zone. On their next series, the Lakers scored again on Olvera’s five-yard run to extend the lead to 28 points.

“That was big for us,” Olvera said. “That lowered their guard down, and we just kept pushing it. We have a bunch of players that can make plays. Everyone in our offense can make plays, and it’s great to have that.”

Whatever momentum the Pacers hoped to build was squashed as Lake Oswego used a 14-play scoring drive that lasted more than half of the third quarter. Capped by Olvera’s nine-yard touchdown reception from Layne, the Lakers went up 35-6 and cruised the rest of the way.

Coury credited Layne’s play and leadership in guiding the offense. Layne completed 18 of 23 passes for 221 yards and two touchdowns, and he rushed 13 times for 65 yards and a score.

“Going into this game, (Layne) was completing 72 percent of his passes,” Coury said. “That’s impossible in an eight-game season with the teams we’re playing. He’s been phenomenal, he really has. And he played that way tonight.”

Junior running back Calvin Macy finished the Lakers’ night with a three-yard touchdown run with 2:34 left.

Lakeridge coach Spencer Phillips lamented the turnovers that put his team on its heels early.

Oliver completed 11 of 23 passes for 180 yards with a touchdown and an interception.

“Of course, it’s disappointing,” said Reichle, who had 17 carries for 82 yards. “I think we just got too jacked up and overhyped the game too much. We came out in the first half and made mistakes because we saw it more than just a game. We didn’t do what we do in the first half. Second half, we cleaned it up a bit and played better.”

“I’m still very confident in this group,” Phillips said. “It’s real tough to win games when you keep giving the ball back. So, it’s disappointing, but we have a lot of confidence. We have a great team, we just made too many mistakes against that team. That’s a state championship caliber team.”

The Lakers (8-1, 4-1) were led by Olvera’s complete arsenal with 95 total yards (77 rushing) and three touchdowns. Lowe had seven catches for 127 yards, and junior Owen West had three receptions for 42 yards.

Armed with a versatile offense with plenty of weapons and an improved defense ready for the postseason, Coury said he’s happy with where his team is at.

“We’re at a good spot,” Coury said. “Our goal is always by game 10, we’re playing good football. I think we are, and again, we had a little hiccup against West Linn, but we got beat by a very good team. We regrouped and came back against another very good team and beat them. Now it gets real.”

Added Lowe: “A loss doesn’t change who we are. You see the first seven games, and we came out blazing. So, we just came back to our roots and we got back into our groove, and this game definitely proved that.”